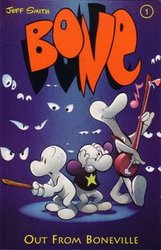 ? Warner Bros. has picked up the rights to make Bone, based on Jeff Smith’s comic of an odd white creature of indeterminate species amidst an epic fantasy war thingie. Nickelodeon had the rights, but couldn’t agree with Smith as to how a TV series should be made; I can’t imagine Warner will fare much better.

? King of hacks Brett Ratner wants to direct a movie of Harbringer, which was a Valiant comic from the ’90s that I never read, mostly because it was a Valiant comic. I kind of think Ratner and Valiant go together reasonably well, and anything that keeps Ratner from crapping on another more popular superhero movie franchise is aces with me.

? This happened a while ago, but I needed a third for my trifecta: Columbia has optioned Garth Ennis’ The Boys, a?and you might be surprised to learn that Garth Ennis is behind this?comic about incredibly violent men who do brutally violent things (specifically, to superheroes who don’t pay attention to collateral damage). Shocker, right? Expect this movie to come out shortly after Bone and Harbinger, which will be in about three or four million years.