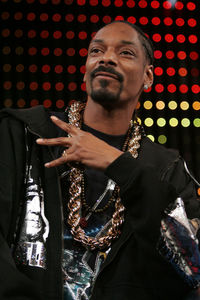 Comedy Central announced its slate for the year, and besides an Andy Richter show (which will be funny and immediately canceled) and something called David Alan Grier’s Chocolate News (which will be compared, negatively and eternally, to Chappelle’s Show), the big news is that Comedy Central is giving Snoop Dogg a cartoon. Sez Variety:

Among the pilots, the untitled Snoop Dogg project will take an animated look at Snoop’s life as a teen in 1980s Long Beach. Tha Doggfather and Tom Lynch will exec produce.

I honestly have no feelings about the cartoon, but I’ll tell you what I am concerned about: Variety calling Snoop “Tha Doggfather.” Yes, I know that’s one of his many nicknames. But I don’t think Variety?as a business magazine, and one with assumably some small sense of dignity?should be allowed to use it. Won’t the soulles white producers who read this assume Tha Doggfather is in fact a separate entity from Snoop? Is Variety familiar enough with Snoop that they can use his nicknames at all? Shouldn’t Variety have to call him “Mr. Dogg” or something? Or at the very least, replace “Tha” with “The”? Why, Variety? Why would you do this to me?