? Let’s start with the movie that has the least potential to suck: Jerry Bruckheimer’s Lone Ranger remake. Admittedly, Bruckheimer has made a lot of shit in his career ( a lot), but he’s hired Ted Elliott and Terry Rossio, writers of Pirates of the Caribbean, to write this film, too. But they’ve already announced they’re going to add a Catherine-Zeta-Jones-in-Zorro love interest into the story, so…yeah. (Beyond Hollywood) 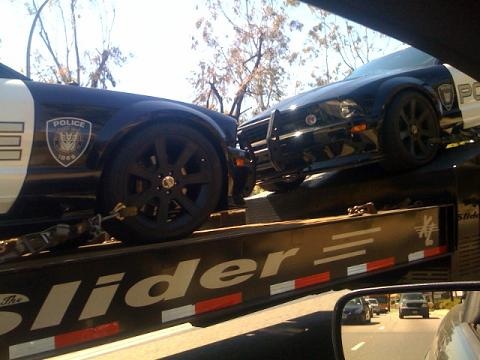 ? I know some of you didn’t think Transformers was awful, but you’re wrong. Anyways, some Decepticon-logo-ed police cars have shown up in Culver City, which you might recognize as the evil Barricade. Please note that the script for Transformers 2 has not been written yet; however, it’s not like director Michael Bay has ever let reality or common sense intrude on his film-making. More pics here. (Pics from InternetBusinessDaily.net)

? Last and certainly least, the Tekken movie?which I’d forgotten about existing?announced today that it has wrapped filming, in the cinematic hotbed that is Shreveport, Louisiana (I’m not making this up). The movie stars absolutely no one, and will be absolutely terrible. (Kung Fu Cinema)

BONUS: This new Speed Racer still, which makes me giggle.