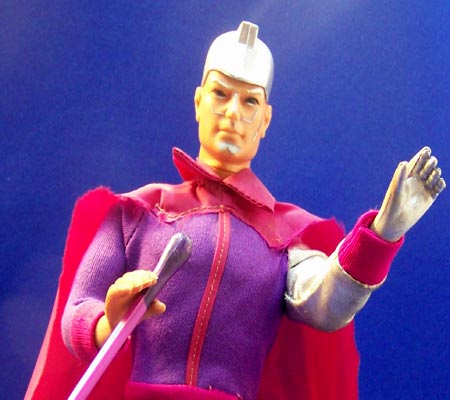 Toy makers are a cowardly, superstitious lot. No, wait?that?s criminals, Toy makers are a sneaky, lazy bunch. If you don?t watch them closely, they?ll try and pull a fast one?and one of their more common tricks is shoving weird, generic characters or vehicles into licensed toy lines, just to pad it out. It especially happened back in the hedonistic ?70s and ?80s, when toys were just for kids who didn?t know any better (as opposed to well-informed, highly nerdy adult collectors). Topless Robot investigates the 10 most blatantly stupid additions to the toy lines of the past.

10) Astronaut from Planet of the Apes (Mego) 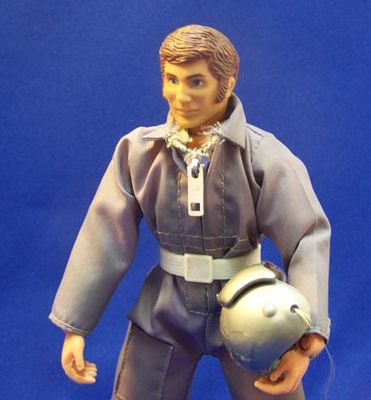 When Mego got the rights to the Planet of the Apes movie franchise, future gun-toting star Chuck Heston?s likeness wasn?t part of the deal. Rather than pay extra for it, Mego just threw together a generic character for the apes to abuse. The mutton-chopped, blue jumpsuit-wearing man they called ?Astronaut? didn?t look like anything that had or would appear in the long-running Planet of the Apes Series.

Mego banked that kids be so dazzled with them talking monkeys (which was pretty reasonable, actually) that none of those dumb kids would notice the imposter-naut. Turns out the kids were indeed that dumb; Mego sold millions of Apes figures, went out of business a few years later and Meho-loving Heston fans were left to bitch about it on message boards with no hope of restitution.

Mattel released a boring figure line based on the 1976 TV series Space: 1999 which comprised of a guy, a girl and an old man who had already left the series. Zython was whipped up to help the dire matters. Looking a lot like the inbred cousin of Nien Numb, Zython came in a green dress and wielded a spacey trident.

This cosmic cross dresser never appeared on the series, and to make matters worse, there were plenty of cool monsters in the show to make figures of. If Mattel wanted to spice up the line, they should have added sexy alien princess Maya, as her side burns melted my butter.

8) Chopper from Starsky and Hutch (Mego) 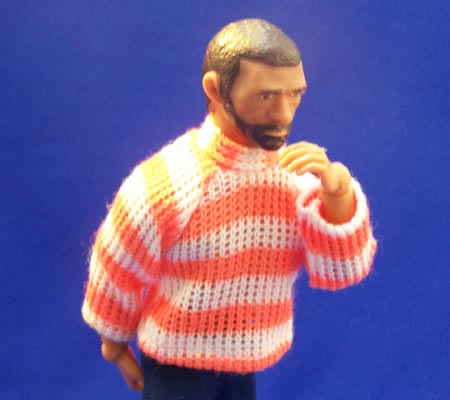 Cops are always sticking it to the Cave Man! Mego had a hit merchandising the ?70s buddy cop duo, but the entire line (which included the funky Huggy Bear) consisted of good guys. The simple solution was to create a baddie for them to chase. Enter Chopper, who with his sloped brow and striped sweater looked like a Cro-Magnon version of Where?s Waldo. In the end, nobody wondered where Chopper was, as he was clogging store shelves everywhere. 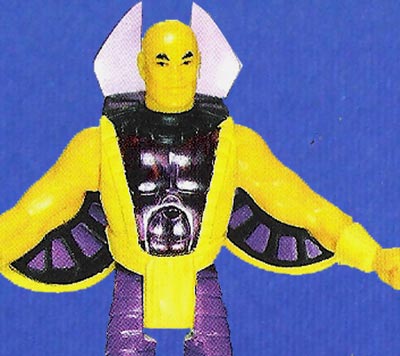 So you?re Kenner toys and you have the license to do any character in the DC comic universe, what do you do? You have 100s of characters to choose from, including the Green Lantern named Chip who?s a squirrel (we are not making this up). Of course, Kenner?s solutions was to create its own super heroes, for some reason?enter the amazing Golden Pharaoh, a bald man covered in gold who looks like he should the mascot for a furniture polish. His action feature was flapping his arms. You know, like pharaohs do.

Although they didn?t have the license, Mego phoned in this ?Bionic Villain? for Montgomery Wards stores in 1975 to be marketed as ?Steve Austin?s Nemesis??but not The Six Million Dollar Man, whose name happened to be Steve Austin, as that would be illegal!

Krome Dome might truly be the most bizarre action figure ever seen. Looking more spastic than bionic with his purple stretch pants and cane, Krome Dome looks like he was put together by drag queens who were trying to create the world?s first Cyborg Pimp. You can almost hear Steve Austin giggling. Kenner thankfully released a somewhat more formidable villain in Maskatron in 1976. 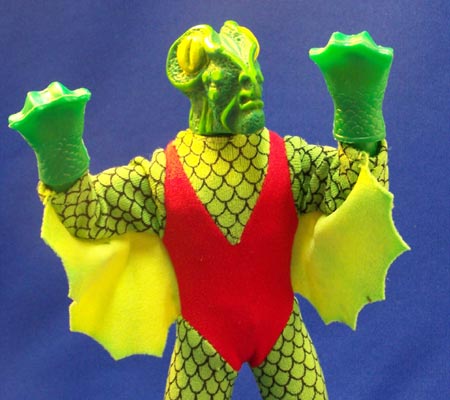 Mego took a lot of liberties in making the Star Trek toy line more kid-friendly, such as dressing aliens such a the Mugato like Timothy Leary, or making the Gorn brown (instead of the Gorn?s non-kid-friendly color, green). But the biggest deviation from the show had to be the Neptunian, because it was an original creation by Mego.

This colorful and actually well-made figure would create future internet havoc, as collectors would furiously debate over which episode of the animated series this guy was based on. Oh, the virtual blood that has been spilled in your name, Neptunian?.. 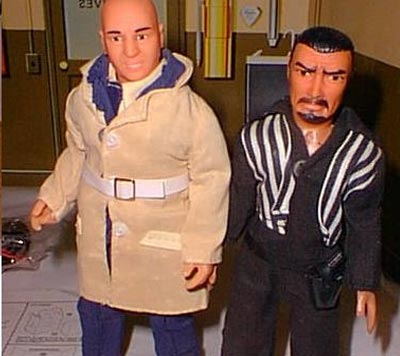 The ?70s detective series Kojak didn?t need a toy line, yet Excel Toys made a half-assed attempt at it anyway. So the Telly Savalas figure didn?t just sit in his office playset (oh yes, there was an office playset) waiting for the phone to ring, they included a generic character for Kojak to bust, simply called ?Bad Guy?.

While the Kojak figure itself was poorly made, he was gorgeous next to Bad Guy, who sported a blank expression, eyes waaaaay too far apart and a striped shirt which makes one think of a mentally challenged Foot Locker employee. If you got Kojak and Bad Guy for Christmas, it was a clear sign your parents hated you. 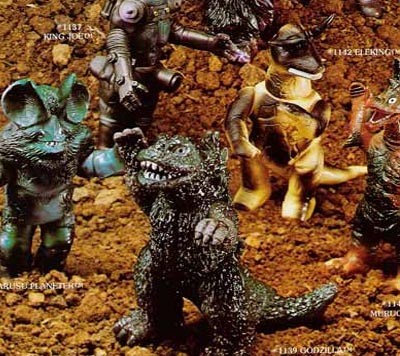 Mattel had the rights to all the Toho monsters and released a line of 6-inch vinyl figures inanely called ?Godzilla?s Gang? in 1979. The only problem is barring the big green guy himself, none of the other characters were actually from Godzilla movies, dashing my childhood hopes of children hoping to reenact Destroy All Monsters in their homes. Bastards. 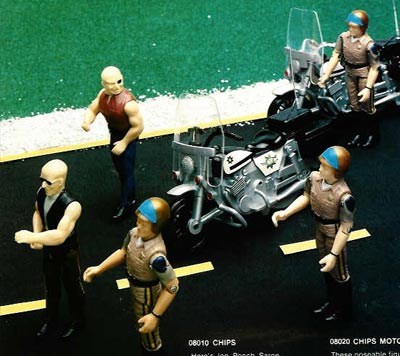 California Highway Patrol officers Jon and Ponch got awfully lonely out there in the road, and making out could only occupy so much time. So Mego created them each a nemesis?the unfortunately named Jimmy Squeaks and Wheels Willie. 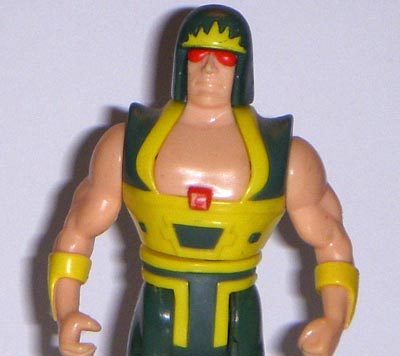 Cyclotron is another example of Kenner?s brilliant idea to make up its own characters for the Super Powers line. Absolutely anybody else in the DC Universe would have been better than this cheesy nobody; not only is he lame, he?s a lame rip-off of of Red Tornado, a perfectly legitimate real DC superhero who Kenner had made a figure of the previous year.

It?s impossible to pick a character in the DC universe that would suck less, Alfred? Nope. Pa Kent? I would love a Pa Kent! Lana Lang as the Insect Queen? That?s a tie.