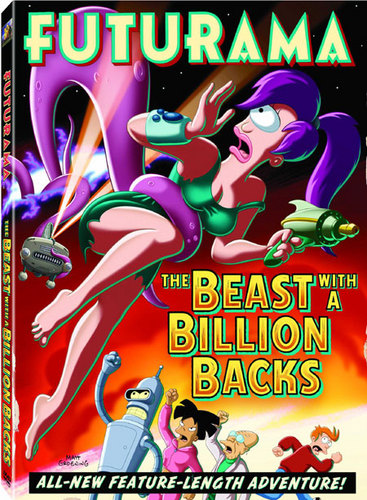 News on the second Futurama DVD-movie has arrived, as well as the cover. Besides featuring voices of David Cross, Brittany Murph, Dan Castellaneta and world-renowned physicist Stephen Hawking (quite the team, there), The Beast With A Billion Backs is coming June 24, and, well, the press release sums it up rather nicely:

In their latest extraterrestrial exploits, Bender, Fry, Leela and crew encounter a repulsive, planet-sized creature with billions of probing tentacles…and soon find themselves involved in a disturbing – yet sensuous – interplanetary love story.

I’m too lazy not gauche enough to copy/paste all the DVD extra,s but you can see them here. In other DVD news, one of our Most Wanted Cartoons has been announced?Freakazoid! Season 1 will have 14 episodes and be released on July 29, same day as Tiny Toon Adventures (which I know some of you have been waiting for).