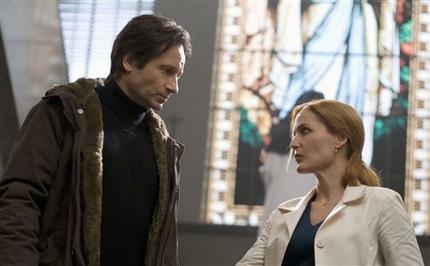 There’s not really been any news about the new X-Files film worth posting, and the pictures have all been of Mulder and Scully standing around, which are boring as well. But now that the movie has a real title?The X-Files: I Want to Believe?I have an excuse to post about it and show a pic. I’ve seen David Duchovny around, so his aging is no surprise, but does Gillian Anderson look significantly hotter, or is it just me? I was actually a long-time X-Files fan until the show went out of its way to shit all over its regular viewers, so I had no intention of seeing this flick (which opens on July 25th). But Ms. Anderson might have changed my mind. Yowza! (Via IESB)