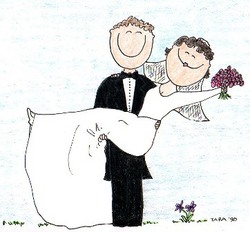 Ah, May. Besides being a month of major motion picture releases, it’s also the month of weddings. Yes, the eternal union of man and woman (sorry, homosexuals!) should be a joyous occasion, but sometimes, the bride and/or groom wake up on that special day and just want to get the hell out of Dodge. Whether you want to disgrace yourself to get out of getting married or just want to make sure everyone remembers your special day forever, here are 10 surprisingly sensible ways to fuck up your wedding.

Just because you’re getting married for the first time doesn’t give you free reign to torture your guests with every clich? in the book. Slideshow of you and your new spouse’s baby photos set to Green Day’s “Time of Your Life,” check. Dancing with your father to “Butterfly Kisses,” check. Everyone in attendance counting down the seconds until they can grab another drink, check.

Sure, family is important, but there might be a reason you haven’t been in touch with Uncle Travis since your dad loaned him $1,000 to pay off gambling debts and he decided to blow the money on a used RV instead. Having a wedding doesn’t mean you need to suddenly pretend everyone in your family is a gem when even the richest mines are filled with a couple of turds. Plus, the last thing you need at your wedding is a repeat of the ’03 family reunion when Uncle Travis got trashed in the first fifteen minutes and spent the remainder of the evening trying to arm wrestle anyone that’d come near him.

3) Cut costs with a no host bar

If you want people to sit through a ceremony entirely devoted to you, there had better be a single-malt light at the end of your self indulgent tunnel. Remove the promise of free booze from the wedding equation and the event takes an immediate shift from being a mutual celebration of joy, to you celebrating alone while others impatiently sit around wondering why they aren’t drunk yet.

4) Pretend to be someone you’re not

Losing weight specifically for your wedding day isn’t going to fool anyone. Yes it’s an admirable goal to look your best, but if the entire focus is simply to look good on your “special day,” then chances are the weight is going right back on as soon as you say “I do.” Also, everyone in the crowd will be too busy placing bets on how long it will take for you to balloon back up to even notice the $2,000 gown you’re wearing. There will also be wagers on when that corset gown top will finally pop like a pi?ata and spill out an avalanche of fat rolls.

Yes, everyone in attendance is here specifically to see you tie the knot. However, there are limits to what they should be forced to endure in the name of your unwavering devotion to someone they all know is likely being married for two parts love and one part convenience. Sixty seconds is the alloted time for your heartfelt prose; after that, it’s fair game for guests to begin snickering at the vows you cribbed liberally from three different Renee Zellweger films.

6) Pick a theme only you care about

Themed weddings walk a thin line between clever and stupid. And ensuring you fall on the right side of that fence should be your top priority if for some reason you decide to anchor the event to one specialized motif. No, it doesn’t matter if you met “in-game”; a World of Warcraft themed wedding is not acceptable. And those tears in your father’s eyes aren’t because he’s so happy.

7) Take it too seriously

Although it might seem like a major tragedy, having tablecloths that turn out to be the wrong shade of white isn’t worth breaking down in a fit of tears. No amount of sobbing is going to magically change the color from ivory to seashell; all it does is make everyone in your wedding party horribly uncomfortable.

Even if you can save a little bit of money by having your wedding on a weekday at a chapel in the middle of Hicksville, Nowhere, you need to realize the attendees will very likely hate you and criticize you behind their back. If, for some reason, the quaint field you chose to get married in has an unfavorable sereneness to dog-crap ratio then you might want to take a minute prior to the ceremony and reassess whether this is the place you want to get your new life started.

Whether or not people think you’re making a wise decision, they will usually support you. But, it’s hard to wish a couple all the best when they’re screaming at each other during the reception and the groom gets so angry he punches a wall and ends up with a broken hand. True story. Everyone has their differences, but it might be a wise idea to try downplaying your disagreements on the wedding day, you know, for the sake of your guests.

Even though your year and a half engagement might feel short to you, for everyone else it has been a hellacious journey through every mundane detail. From stressing over engagement photos to what type of font will go best on the invitations, nobody cares. It’s not going to matter whether the cake is a cascading four-tier or a traditional three-tier when you’re playfully shoving it in each other’s face at the actual ceremony over a year from now. The biggest way to eff up your wedding is to become disillusioned to the point where you think everyone else is as excited about it as you are.