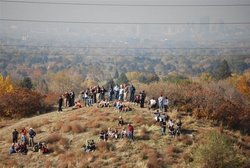 Advertising is at its most basic, manipulation. Thing is, though, they’re not supposed to be so obvious about it. That’s the art to advertising?not letting on that you’re being controlled. Some companies do this through the use of humor (like pretty much any beer ad these days), and some will tell you a story (like the Folgers Coffee ad when Peter comes home from college?or from prison for statutory, or whatever, because the ad doesn’t really say). But sometimes, ad execs get tired of hiding their true motivations, and want to just blatantly control the emotional state of the viewer. They throw up their little ad-exec hands and say “Fuck it. Let’s just out and out screw with their heads.” And that, I’d argue, is exactly what?s happened in the following TV commercials.

Michelin abandoned this ad campaign after using it for many years, mainly because it’s unapologetically evil. You remember the unsubtle slogan: “Because so much is riding on your tires.” The thing is, the visual that goes along with that shows a baby sitting in a tire. A Michelin tire, of course. So here’s the message: “buy our tires, or you’ll kill this baby.” “But I don’t even have a car,” you might protest. “Okay, you just killed one baby in the time you took to say that,” the ad execs say. “You want to go for two? Or you just want to buy some Michelin tires?”

Pathos?the Aristotelian appeal to emotion?is often at the heart of commercials. And sometimes, that makes sense. But usually not. Like in this ad for JC Penny’s, which is only an ad for JC Penny’s because it says JC Penny’s at the end. Otherwise, it could be an ad for feminine hygiene products or the Church of Jesus Christ and Latter Day Saints. Basically, it’s a feel-good/feel bad ad that shows how fast your kids grow up. The problems with this ad are everywhere?first, it has next to nothing to do with purchases at a failing department store chain. Second, if you don’t have kids, this ad will go completely over your head. And third, if you do have kids, you’ll be too busy feeling gutted over the daily loss of their childhood innocence and anticipating your ever-closer death that the last fricking thing on your mind will be “hey, I need some socks. I better go to Penny’s.”

3) “Adorable Dogs in Jail” by Pedigree

There’s an old rule in entertainment that you can kill as many people as you want, so long as you don’t hurt the dog. It’s like Johnny Fever said in an old episode of WKRP: “It’s like the movies, you know? You can waste the entire Confederate army, and nobody cares. Three-hundred ninety-five thousand guys, deader than doornails. But kill one collie, everybody collapses in grief!” This ad is the flip side of that. Show a bunch of dogs behind bars, looking at you with their little cocked dog-looks (and avoid the teeth-baring snarls that may have landed them there in the first place?), and sell loads of cheap-ass dog food.

You don’t need to speak Spanish to get what this ad is doing. In fact, there’s no speaking at all until the very end?most of the audio is nothing but violins. Freaking violins. As in “break out the?” (And while you’re at it, front with some Kleenex, too, because you’ll probably need it.) We all know that kids with cancer are sad. It’s tragic and its wrong, and we should probably give something to help fight it. But seriously, is this sort of ad fair? I mean, I have to support the overpriced coffee industry too, you know.

Another foreign ad, just to prove that ad manipulation isn’t unique to American culture. This company, generically named “Thai Life Insurance” (I mean come on, the take-out place down the street can be called Lemongrass Bangkok Thai Basil Palace, but this place just goes with “Thai Life Insurance”?) has a host of sad commercials reminding you to take out policies in order to protect your children’s future. Because really, these ads remind you, you were something of an angry bastard to them in their past.

6) “Ronald Is My Only Friend” by McDonalds

And speaking of American culture, here’s an ad that uses exactly that to try to push its fast-food agenda. McDonalds is a long-time contributor to the canon of advertising manipulation?they won an Australian “award” for doing just that in the Fall of 2007. But this ad has a special quality to it. Maybe it’s the profiting from the longing for a fading America, maybe it’s the cynical idea that this sad little family visits their “friend in town” McDonalds everywhere they visit in their road trip across the country, or maybe it’s the evidence that Morgan Spurlock didn’t actually invent the social dietary experiment that was the basis for the film Supersize Me. Ah, America in 1971: woody station wagons, drive-through meals, and songs that would make John Denver puke.

And we end on a classic of the genre?Coke would like to teach the world to sing. Preferably while holding a bottle of syrupy cola drink. The text at the end of the ad reads: “On a hill in Italy, we assembled young people from all over the world to bring you this message from Coca-Cola Bottlers. All over the world, it’s the real thing. Coke.” And how very nearly inspirational that message is. This is one of the very few ads that actually inspired a pop song based on its jingle?most people think Coca-Cola co-opted the pop song for this ad, but the opposite is true. This ad captured the zeitgeist so strongly that it not only had its own fanbase clamoring for it to be released as a single, but entered American culture. It capitalized on the sense of growing world-culture in 1971, and made it seem like there was a soda behind the whole movement. Commercializing a social movement? Oh, it’s the real thing, all right.