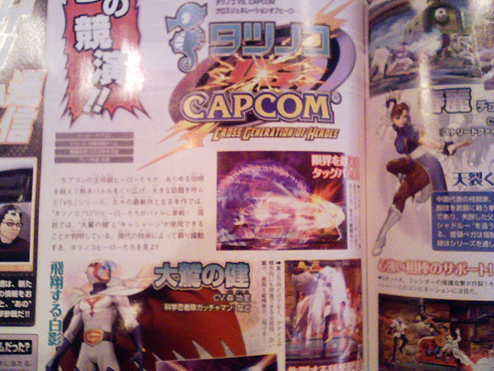 Well! That’s some hardcore awesome news to wake up. Kotaku reports that Japan’s Weekly Famitsu reports that Capcom will be making another of its great Vs. games, and this time, Capcom’s brawlers will take on the characters of Tatsunoko Productions. The game will be a tag fight like Marvel Vs. Capcom, and come out to Japanese arcades this winter. Here’s the potential series’ who might have characters fighting on behalf of Tatsunoko:

? Gatchaman, a.k.a. Battle of the Planets
? Speed Racer
? Casshern
? Karas (which was pretty good for being totally unintelligible)
? The Southern Cross and New Generation portions of Robotech
? Samurai Pizza Cats (can you imagine?)

I’m guessing Capcom went with Tatsunoko since they own all their characters; if Capcom wanted to fight anime characters based on manga (like Fullmetal Alchemist, for example) it would require a lot more negotiation with and money for the publishing giants. That won’t stop me from imagining, say, Gainax vs. Capcom. Hey, you know what other studio could work? Sunrise, who also owns their series entirely?Ryu and Chun Li could fights the psycho kids from Gundam Wing, Spike from Cowboy Bebop and so much more. This game is seriously good news for anime fans, people.