Iron Man might look to be a pretty good flick, what with the special effects, Gwyneth Paltrow as Pepper Potts, and Robert Downey Jr.’s experience with playing (or being) a brilliant but drug-addled egotist. But in terms of the comics, Iron Man has long been considered by many to be a first-string character with a decidedly second-string rogues gallery. If a hero is defined by his villains, then Iron Man has been in trouble for some time, starting with his first appearance in 1963’s Tales of Suspense #39. Once writers hit on Iron Man’s corporate enemies, his personal battle with the bottle, and eventually his recent government stooge-ness in the events of Civil War, things got more interesting for Tony Stark and his shellhead alter ego. Before that, though, Iron Man was a concept largely rusting away, for lack of decent foes to punch in the face. Here are his 10 villains that won’t be seeing any of that sweet Hollywood box office any time soon.

Of all the losers on this list, this guy is the least loser-ish of them all, I have to admit. And if the first Iron Man movie doesn’t tank, then this guy might actually have a shot at making it to the silver screen. The thing that drags this guy down is his name. By itself, Titanium Man is okay, I guess. Titanium is a cool-sounding metal, I’ll agree. But in creating an opponent for Iron Man, just coming up with a stronger, better, more powerful-sounding metal, and then adding “-man” to it?sort of smacks of petty overcompensation. 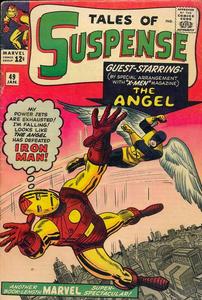 In the tried and true tradition of heroes fighting heroes, the X-Men‘s Angel shows up to tussle a bit. The match-up is incomprehensible?Angel was the weakest of the X-Men. His only power is to fly. Slowly. But still, he manages to beat the crap out of Stark, because, you know, punching armor bare-fisted is pretty effective. But the set-up is even more ridiculous; Angel flies too close to an atomic bomb test, and instead of vaporizing him, it turns him evil (as is standard and expected in these situations). So he fights Iron Man, goes back to the X-Mansion to tell his friends off (he says he’s joining the evil mutants because “that’s where the action is”), and generally makes an ass of himself. Those atomic bombs, such a nuisance. 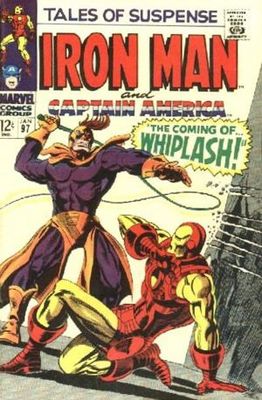 The problem with writing Iron Man has always been that Iron Man is a guy in armor. Captain America can be shot, Spider-man can be slugged. Iron Man just has to cower, mainly from enemies that really can’t hurt him, if he thinks about it. So they had to make Iron Man sort of a doofus. Whiplash is a flamboyant guy (check out those fancy pants!) with a ponytail and a whip. Why this should take more than two panels for Iron Man to defeat, I have no idea. Panel one: Iron Man thinks “hey, I’m being attacked by a fancy boy with a whip.” Panel two: Iron Man repulsors his ass into a wall. The end. Time for a vodka martini or three! 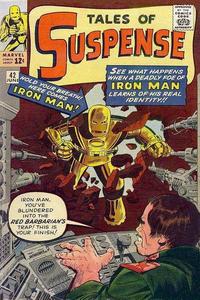 Okay, so in issue #41 they tried the evil magician (oddly enough, also named Doctor Strange, the “good” version of which was to debut in Strange Tales just a couple of months later?). So what to do next? Why, generic communist, of course! The Red Barbarian was a general in the USSR army, and he was generically evil, wore generic medals on his generic brown fatigues, and drank a lot of generic vodka. Too bad he wasn’t called the Red General, because that would have been a much cooler name…but Barbarian has a nice McCarthy-esque ring to it, doesn’t it? 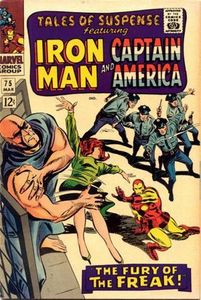 Speaking of running out of ideas, just calling a new villain “The Freak” is tantamount to giving up, isn’t it? How about naming him “Bad Guy” or “Weirdo”? It’s sort of like George Lucas’ decision to name portly pilot Red Six “Porkins.? That’s just fucking rude. And really, since The Freak was actually Iron Man?s former best buddy Happy Hogan, calling him The Freak made Stark a double-asshat. Bad form, Mr. Stark. Bad form. 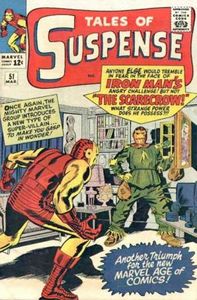 I have no idea how Marvel thought they could get away with this guy. He’s not a direct copy of DC’s Bat-villain Scarecrow, I guess. He has a different name and backstory, true, and the origins of his powers are different, but essentially, he’s still a villain named Scarecrow who instills fear in his opponents. I mean, come on. That?s like inventing a new character called Spiderman (no relation to the hyphenated guy, natch) who’s secretly German-born Daily Planet reporter Dieter Barker, and who lives with his old Asian relative Aunt Mei. 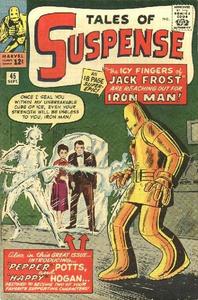 Unbelievably, this issue actually contains the line: “Look out, Pepper, or he’ll nip at your nose!” Okay, so that’s completely not true, but it makes the issue no less ridiculous. Jack Frost has the distinction of being Iron Man’s first costumed foe (unless you count Gargantus’ loincloth), but that’s pretty much where the distinction ends for this guy. Eventually, Jack Frost would give up the Coldmiser-look and become the slightly better named Blizzard. Better a Dairy Queen confection than a snowy elf, I guess. 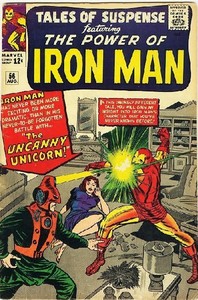 If there’s one character that pretty much proves that comics had by 1964 used up all the cool animals to use as character templates (until someone remembered the wolverine?), it’s this guy. What better to strike fear into the hearts of my enemies than to name a villain for a mythical animal featured prominently on the posters in young girls? rooms everywhere? I guess they thought they might salvage the idea by calling him the “Uncanny” Unicorn, but they were wrong. Horribly, horribly wrong. And don’t even get me started about that helmet. 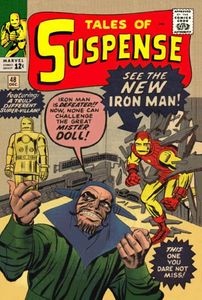 This villain was originally named Mister Pain, but the Comics Code Authority didn’t like that. But was “Mister Doll” seriously the number two choice? Man, I hate to think what the names on the rest of that list were. Mister Blue Napkin Face, maybe? Is that worse than Mister Doll? I’m not sure. Anyway, aside from his crappy name, he’s also a complete rip-off of the Fantastic Four villain the Puppet Master, who made his debut over a year previous in 1962. Interestingly, the cover copy proclaims that “a truly different super-villain!” I think thou dost protest too much, Stan. 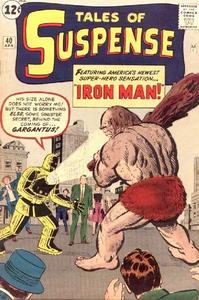 Iron Man’s first real opponent after his origin story in #39, Gargantus is something of a disappointment: a huge caveman with a club. Yeah, I get the irony of primordial man vs. modern machine, and yeah, I get the “surprise” when the giant turns out to be an alien robot terrorizing a small town in some weird bid to take over the world (one small town at a time, apparently). I mean, I guess I get that, what there is to get. But still?right out of the starting box, and the best you can come up with is a robot caveman? Seriously? Telling fact: The Flintstones had been on TV since 1960, and The Jetsons debuted in early 1963?right when this issue was in production. Excelsior!