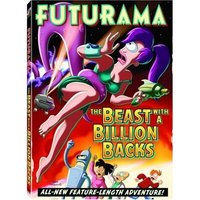 ? Futurama: The Beast with a Billion Backs
The second Futurama DVD movie is here, and I actually got an early copy. I’m going to call it better than the first movie, Bender’s Game, but still not quite as good as some of the best episodes. The plot is more epic than the first movie, with a creature from another universe entering into a relationship with everyone (yes, everyone) in this universe. There are many, many great moments, but I can’t help feeling the plot?especially the way Bender’s B-story was shoehorned back into the A-story?didn’t flow right, which used to be one of Futurama’s greatest strengths. Now, I’m only nitpicking because I’m a hardcore Futurama fan, and it’s what hardcore fans of anything do?definitely pick one up, because you’ll enjoy it. I sure did.

? The Spiderwick Chronicles
The fantasy movie where the kid talks to the pig-people.

? Persepolis
The animated version of the award-winning graphic novel you haven’t read because it’s not about superheroes.

? Death Note Vol. 5
If you get the limited edition, you get a Misa Misa figurine. Don’t even pretend you don’t want it.

? Papaya: Love Goddess of the Cannibals
What a sexy DVD Day! Papaya?which is a fabulous name for a cannibal lopve goddess, I might add?is played by Sirpa Lane of The Beast in Space.