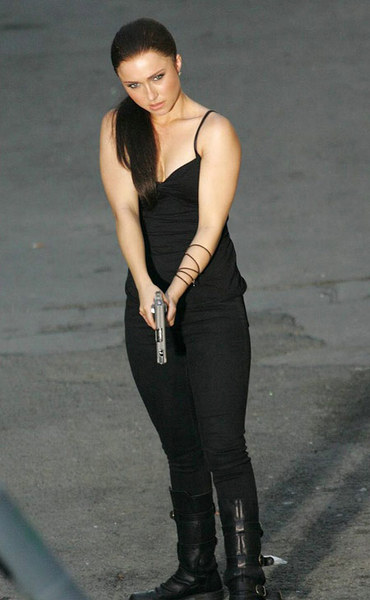 Hayden Pantierre has a new ‘do in the third season of Heroes, which is only interesting if you 1) still manage to enjoy Heroes after that godawful second season of 2) click the jump and read the accompanying spoiler. (Via Movieweb)

“In the first three minutes one of the lead heroes is going to bust a cap off at one of the other lead heroes. And oh yeah, the guy she pulls the trigger on just might be the guy she’s playing tonsil hockey with in real life. She also tells him (on cam), ‘I always loved you.'” The spoiler also notes that she will be featured in a time shift as well.

That means Peter Petrelli/Milo Ventimiglia, who probably deserves to be shot for his off-screen sexcapades with the barely legal Pantierre. My guess is this picture of Claire is from one of those dark futures like Heroes used in Season 1, where she’s a cop or FBI agent or something. I can very much see the producers using an all-black outfit and different hair to show her darker future personality (since they did that with both Hiro and Peter), plus she seems to be pretty competent with a gun, at least more than you’d expect a cheerleader to be.

I’m kind of excited, since seeing that fucked-up future was the best part of Heroes season 1, but then I remember it was lame when they saw the post-virus future in season 2 (where that stupid Irish barmaid is still trapped, by the way), and now that it seems they’re doing it a third time, it just seems lame. As any X-Men fan can tell you, you can’t look into the dark future multiple times without getting diminishing returns.