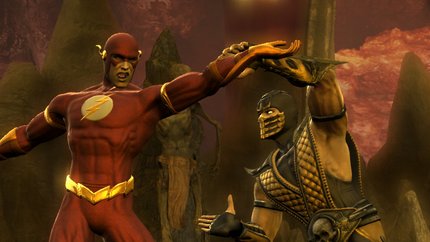 So Gamespot had a lil’ interview with Mortal Kombat creator Ed Boon about the upcoming Mortal Kombat Vs. DC, and the question and answer floating around the nerderwebs is about how the DC superheroes with mesh with MK‘s “fatality” system is this one (pinched from the Newsarama blog):

Gamespot: Have you made any more headway on the fatality versus finishing moves?

Boon: Yes we have. All of the MK characters and all of the DC villains will have fatalities. The DC heroes who don?t kill that often will have brutalities that will function just like fatalities but don?t actually kill the opponent.

Uh-huh. Let’s take a quick look at this, shall we? It’s nice that the villains will have Fatality moves (here’s hoping Dr. Light will be a playable character, and can rape Johnny Cage to death), but what if any heroes will actually have Fatalities? The only DC heroine I can think of that kills is Wonder Woman, thanks to her execution of Max Lord a few years ago, which garnered her a severe amount of tsk-ing from both Batman and Superman. But would a Wonder Woman Fatality be cool to watch? At best, won’t it be her just cutting off someone’s head?

And what about these Brutalities? Like, think of the Flash?what could his Brutality move be other than running around super-fast and pummeling his opponent? Shouldn’t that be one of his regular goddamn moves? What the hell will any of these Brutalities be except demonstrations of the characters’ superpowers you won’t be able to use in the regular game?

Last but not least, take a good look at the picture at the top of this article. Yes, the Flash, a guy who can run at the speed of light, has been put in an armlock by a satanic ninja. I feel this is a problem.