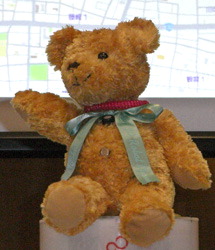 I’d like to thank TR contributor Summer for pointing this out, but frankly, it terrifies the living hell out of me and I’m not sure I’ll ever be able to sleep again, let alone drive. From Pink Tentacle:

On June 3, engineers at iXs Research Corporation unveiled a robotic teddy bear designed to work as a talking car navigation system. The prototype robot stands 30 centimeters (1 ft) tall and has 6 joints in its arms and neck, which it uses to make gestures while providing spoken directions.

The robot bear is also equipped with functions to improve auto safety, such as an alcohol detection sensor embedded in its neck. If it smells booze, the robot confronts the driver, saying, ?You haven?t been drinking, have you?? Other sensors detect wreckless driving, so if the driver suddenly accelerates or slams on the brakes, the robot says, ?Watch out!?

As a bonus feature, the robot bear provides information about nearby landmarks when you stroke its head.

First of all, I already have a device that tells me when I’m going too fast or breaking too hard and makes passive-aggressive comments when I’ve been drinking too much; she’s called my wife. (Zing!) But if I had that little nightmare in my car, the only place I’d ever drive to is a bar and, knowing that little bear was waiting to judge me, I’d never leave.