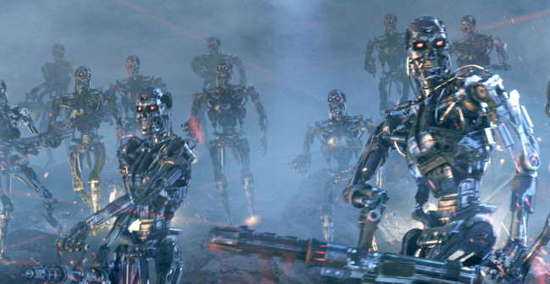 Between its total lack of Arnold and Sarah Connor and its PG-13 rating, I think we’ve all understood that Terminator 4 was going to suck out loud. But AICN has heard a rumor about the end which is so amazingly awful that I want to share it with you all and make you guys upset, too. It’s certainly a SPOILER, so it’s after the jump.

As summarized by Dark Horizons:

The original AICN report says that the character of Marcus (Sam Worthington) was a criminal who was executed in 2003 and donated his body to Project Angel which was involved with SkyNet. They use his body and make a Terminator out of him.

It goes on to say that at the end of the movie John Connor (Christian Bale) is fighting a T800 model 101, loses and dies. The fellow leaders of the resistance feel it’s important to keep the image or idea that John Connor is still alive so they rip off Marcus’ skin and put John Connor’s on the skeleton so now Marcus is John Connor.

Yep. John Connor is both a Terminator and not John Connor. Can’t James Cameron have these people set on fire or something?