There’s something almost ethereal about conquering a good challenge. That thrill of facing nigh-impossible odds with steel-eyed determination and gusto. Like, T.E. Lawrence leading a small army of disparate Arab tribes to victory against the Ottoman Empire. Luke Skywalker shooting fiery balls into a rather conveniently vulnerable ventilation shaft found on the Death Star. Thousands of first graders everywhere beating the original Super Mario Brothers with no warps and no 99-lives trickery.

But while Super Mario Bros. is perhaps the perfect template of difficulty and challenge in a video game?you instinctively “get” the mechanics of the game in the first few levels, and the rest of the game sets out to foil you with precarious traps and enemies and devious level design?there have been those games and more importantly game designers who have flagrantly ignored Nintendo’s valuable lesson and instead have seemingly designed games to frustrate, infuriate, and generally make you throw your controller and whatever else you can find in a violent display of personal property damage. When you’re too angry to play, you might as well check out these 10 most insanely hard videogames to keep you busy. And angry. 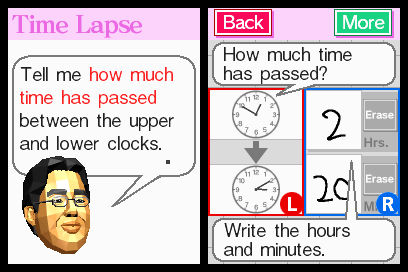 Somewhere along the annals of human history, it came to be known that “really good at math” somehow became synonymous with “really fucking smart.” Like John Nash, whom you might remember was portrayed by Russel Crowe with his arms eagerly outstretched for another golden statuette. He was a brilliant, Nobel Prize-winning mathematician, sure, but he was also a raving anti-Semite. And I ask you, who is really smarter: a man with an irrational, deep-seated hatred of Jews, or someone who maybe passed College Algebra after taking it twice with a C+, who thinks Jews are all right?

Not that any of that matters to the smug polygonal prick in Brain Age, who delights in labeling you a drooling, senile old retard for taking longer than four seconds to remember that 7 times 3 equals 21. 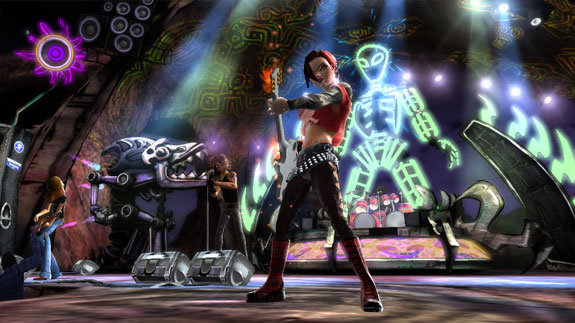 Like pretending to play “Iron Man” on your siblings’ acoustic guitar, or thrashing about violently in the shower to the refrain of AC/DC, there was something immediately, albeit stupidly, rewarding about sliding on a plastic guitar and hitting colored buttons that sounded out the hooks to “Killer Queen.” And while the “Hard” and “Expert” modes in the first two Guitar Heroes often bordered on intimidating, you at least got the feeling that with enough practice and zen-like meditation, there were at least beatable.

Not so with the third outing. Blockbuster sales, and possibly dump trucks full of money and blow provided by frightened record labels delivered to Activision, must have made the decision all the easier for new developer Neversoft to cater the game mostly to the hardcore. Which means what was once “Hard” and “Expert” has now become “Easy” and “Medium,” and what is now “Hard” and “Expert” seems only applicable to the more inbred members of our society with precious extraneous digits. But even then they would probably lack the speed and dexterity for it regardless.

And who the fuck thought it would be a good idea to “reunite” the surviving Sex Pistols? That’s almost as much of a colossally horrid idea as “reuniting” Nirvana. Which, hey, now that Guitar Hero is a guaranteed yearly game, is bound to happen. It’s like kicking the exhumed, rotted corpse of Rock n’ Roll in the balls.

Contra: Hard Corps is my absolute favorite of all the Contra games. It’s constantly outdoing itself with a cadre of wacky characters, multiple endings, insane screen-filling boss battles, and an unrelenting sense of violence and speed and adrenaline. This is counter-balanced, of course, with the fact that the game is goddamn impossible: other Contra games have their share of cheap shots at the expense of the player, sure, but nothing is as cruel as messing with your childhood expectations of when you kill a boss, you shouldn’t have to avoid its flailing, flame-engulfed corpse. At least the Japanese version gave you three hit points, which was of course removed from the U.S. version, presumably because Konami can only achieve sexual gratification through the cries and tears of American children.

Speaking of trial-and-error gameplay! At least a skilled player could conceivably make it to level 2 of any new Contra game on the first playthrough before succumbing to Game Over-itis: meanwhile, Dragon’s Lair, and in fact the entire (thankfully long-dead) genre of laserdisc FMV games were based upon the conceit that unless you knew the EXACT time and location of every trap, jump, and villain in the game, Dirk the Daring was doomed to lushly-animated failure. Credit is due to Don Bluth for making some damn fine-looking death scenes, but that’s little consolation to the children who quickly ran out of quarters while their friends continued to dominate the high-score board on Dig-Dug. 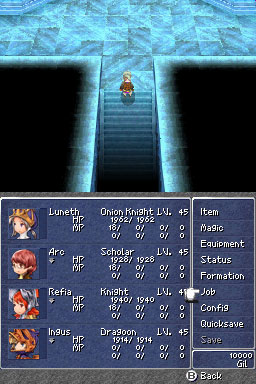 With RPGs nowadays, the player can safely assume that should his entire party be quickly annihilated in some random skirmish, it was because didn’t deploy the correct tactics, forgot to utilize items or spells, et cetera. There was a time, however, when even the smallest of D&D-inspired critters could lay waste to your entire party of RPG stereotypes within seconds. And because save points and healing items were rare, that meant that this happened quite frequently. A lot.

Specifically, this happens quite often in the DS remake of Final Fantasy III, which probably only seems immensely hard because it’s a completely straight remake with prettier graphics of an NES RPG, on a system whose main RPG quota is filled with yawn-inducing Pok?mon clones and Mega Man spinoffs. 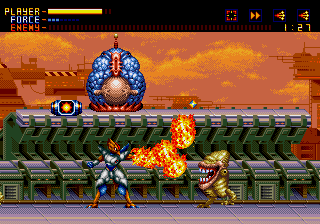 Practically every game created by cult-favorite Japanese developer Treasure could make this list, but the one that most embodies their idiosyncratic sensibilities for thumb-blistering intensity would be the Sega Genesis import Alien Soldier. Simply learning the cumbersome controls?mapped to a now-arcane three buttons?is taxing enough, but add that to a quickly-depleting life meter, weapons that need to be slowly recharged, and “levels” that are more like six or seven boss fights strung together, and you have one nightmarishly difficult 16-bit experience.

The game has two difficultly levels: The condescending “SuperEasy,” which in fact is actually rather SuperHard, and “SuperHard” which should be re-named to “Not Even Jesus Christ Himself Could Beat This Game.” 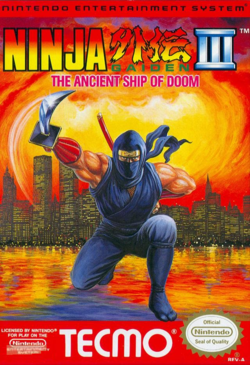 Three seems to be the magic number as far as making altogether too-fucking-difficult video games is concerned. Ninja Gaiden III is mainly as hard as its two NES predecessors, which is to say, stupid hard. Ryu Hayabusa can summon flames, flip across buildings, and even create shadow clones of himself to lay waste to his enemies. But damn if eagles and birds don’t give him a hard time. And eagles and birds fucking hate Ruy Hayabusa, swarming him every single minute he’s outside.

Once again the evil sadists in charge of localizing this game for U.S. audiences decided that our children need to be more enraged and upset than their Japanese brethren, so they added tricker enemies and jumps, and limited continues. Limited continues. It almost makes you want to preemptively launch your controller into your TV screen.

Aside from his difficulties dealing with airborne enemies, at least in Ninja Gaiden you don’t feel as though your main character is a limbering, hunchbacked senior citizen made entirely out of lead. Which is to say, in Castlevania, Simon Belmont moves with all the grace of Tipper Gore in a conga line, and can jump about as efficiently as an M-1 Tank. It should probably be mentioned that it’s often impossible to tell where certain platforms end and begin, as the game’s dark, drab color palette makes such things indistinguishable, so it is oh so fun to watch Mr. Belmont sink like Geena Davis’ career at random.

It’s a good thing he’s got a magic vampire-killing whip, too, otherwise the game would look like a cheap ripoff of Grandpa Goes To The Pharmacy To Get Some Ointment For His Rheumatism, And Fights Dracula. 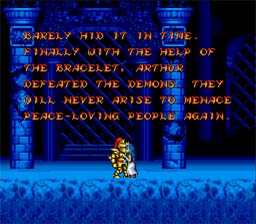 There’s almost little to be said for this game, as everyone who’s ever touched a video game controller knows that the Ghouls n’ Ghosts games are an exercise in futility. The Super NES game, though, goes one step beyond the call of frustrating duty by adding a double jump. A good idea, in theory, except that it’s impossible to change trajectory in mid-jump, so it’s far easier to send King Arthur into some bottomless pit or into the gaping, toothy maw of any number of demons and zombies. This game also makes use of my most hated of videogame conventions: the anti-power up. It looks like a power-up, comes in the same box as a power-up, but instead of getting a power-up, you get turned into a duck or an old man. Or a pile of skeletal remains. 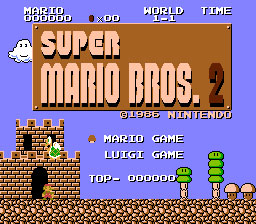 Truth be told, The Lost Levels might not be the absolute hardest of all games ever made, but it is easily the most frustrating on a number of levels, no pun intended. While Mario mastermind Miyamoto took his SMB1 team to work on the classic Legend of Zelda, a team of B-list programmers were tasked with hatching a sequel that serves to only obfuscate the original’s charm. This is sewn into even the beginning of the game, where the origin of the anti-power-up itself is born in the guise of a sneaky, evil little mushroom. It looks, suspiciously perhaps, like the original super mushroom, or at least enough so that you feel compelled to touch it. But it’s a power-up, so it can’t be destroyed, only avoided. The entire game is filled with such sadism; invisible platforms over massive pits, indestructible enemies, and other horrors.

Nintendo’s U.S. branch wisely thought better of indoctrinating an entire generation of masochists by releasing the game in America, and instead added Mario characters to the game Doki Doki Panic, resulting in the charming and wonderful Super Mario Bros. 2 that we all know and love. So there’s a happy ending, or at least there was, until the release of Super Mario All-Stars for the Super NES, as well as the Wii Virtual Console, where The Lost Levels continue to live on, raising the collective blood pressure of naive gamers everywhere. Not that there’s anything wrong with making, or god forbid, playing a hard videogame. I just prefer games where I feel like the developers don’t actively hate me.