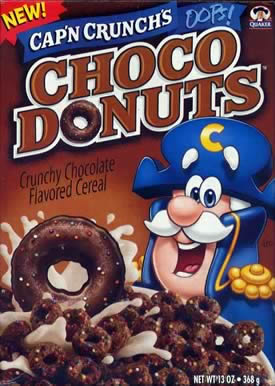 When it comes to the wide variety of cereal that most of us have been consuming on a daily basis for roughly a quarter of a century, fate can be a cruel bitch. When new products emerge, with their sugar-blasted flavors and snazzy box art, they often seem like a surefire blockbuster, the cereal equivalent of an Armageddon if you will. But they can just as easily wind up like The Island, cast aside with indifference, left to collect dust on a Piggly Wiggly grocery-store display. Others are movie, TV show or toyline tie-ins that are given the axe mere months (sometimes less!) after debuting. Sad as it may seem, there are many of us who have fonder memories of the sweet taste of Donkey Kong Cereal than the first time we copped a feel.

So while disgusting crap like King Vitamin and Kaboom! can still somehow get shelf space after decades of making kids gag, countless others, like our beloved Mr. T Cereal, have seen their assembly lines crawl to a heartbreaking halt. Here we pay tribute to the 10 taste-bud tantalizers that should?ve been given a stay of execution. To paraphrase their commercials, they?re part of this complete wish fulfillment.

It?s been long been a tradition of cereal manufacturers to take something kids love and just make the damn things smaller. (See Cookie Crisp, Reese?s Peanut Butter Puffs, Oreo O?s, etc.) Shockingly, it took up until 1995 for Kellogg?s to realize that Pop Tarts ? second only to cereal, and possibly chocolate-chip pancakes, when it comes to what brats want for breakfast every day?could be shrunk down, drowned with milk and utilized for raking in mad dollah dollah bills, y?all. But even with two varieties, Strawberry and Cinnamon, Pop Tarts Crunch died on the vine pretty quick, and the crestfallen Tarts slinked back to Toaster Land. We?ll blame the irritating commercials for ruining their crossover appeal.

Peyo?s posse actually outlasted most of their cartoon breakfast rivals, as Smurfberry Crunch slogged?and sogged!?it out for a few years. (It was renamed ?Smurf Magic Berries? in 1987.) Post had already enjoyed wild success for 10 years by plastering Fred and Barney?s mugs all over Cocoa Pebbles and Fruity Pebbles?a liaison that somehow continues to this day, even though most children wouldn?t know Mr. Slate from their head up their ass. But the Smurfs just weren?t destined to join the upper echelon of cereal fame, even though their Crunch was fantastic, in a ?Crunchberries without the annoying Cap?n Crunch cereal? kinda way. Maybe Gargamel shoulda tried this stuff instead of trying to eat the friggin? Smurfs themselves all the time. 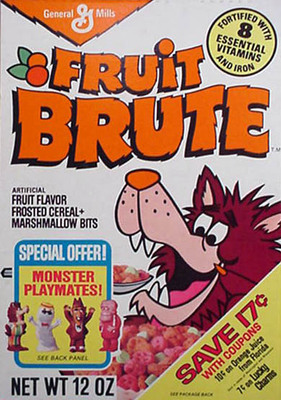 Like the long-rumored third Summers brother, Fruit Brute has long been discussed but rarely seen?save for a couple of appearances in the background of Tarantino films and a bobblehead baring his lycanthrope likeness. He was part of the original General Mills Monsters lineup, but Count Chocula, Frankenberry and Boo Berry pulled a ?Planet Hulk? and jettisoned his furry fanny off into parts unknown. (Wow, two Marvel references?) This was likely due to the fact that his cereal had lime-flavored marshmallows, and most kids weren?t ready for the Miller Chill equivalent of breakfast. Still, the Brute had a decent shelf life?1975 to 1983, roughly. We don?t care if it tasted like crap or not; we just want a werewolf-themed cereal back out there, and something tells us that Benicio Del Toro ain?t gonna come to our rescue. Still, how awesome would ?Del Tor-O?s? be?

Even though their second flick sucked, Bill and Ted had a crazy-ass amount of tie-ins and licensed products. Remember their cartoon? Their toyline? Their kickass albeit short-lived Marvel comic, which actually garnered an Eisner award nomination for Milk & Cheese creator Evan Dorkin? A cereal of their own was a logical step, and it was most excellent, as well. Too bad ? or good, if you?re a glass-half-full type – it could be found in massive quantities at Dollar Tree stores around the summer of ?91. (Oftentimes shrinkwrapped with a ?Bill & Ted Cassette Tape Case? that was shaped like their teleporting phone booth.) But like the chemistry of Reeves and Winter, ?cinnamon oats with marshmallow notes? were a combination that could not be denied.

Apparently the good Cap?n Crunch and his slavemaster bosses at Quaker take us all for a bunch of morons. In 2001, they had an inspired idea. A new animated commercial aired showcasing the Crunch factory at work ? but do to some sort of error, boxes of the Cap?n?s Crunchberries cereal were filled with nothing BUT the berry cereal pieces. Hence, a new cereal was born: Oops! All Berries. (How many of us would eat around the regular Cap?n Crunch cereal and save those precious Crunchberrries for last, anyway?) Well, in early 2002 they tried this trick again with another new cereal, Oops! Choco Donuts. Now, are we to believe that the Cap?n somehow ACCIDENTALLY mass-produced chocolate-doughnut cereal, that his assembly lines were somehow equipped to fuck up this royally? We?d say the Cap?n deserved to be keel-hauled, but you really can?t go wrong with cereal that tastes like chocolate doughnuts. Especially when it?s given an extra layer of crunch thanks to sugar sprinkles.

Though he spends all of his time in a kitchen, the Swedish Chef would have been pegged by few as the sole Muppet to receive his own breakfast cereal. But holy shit, what an ingenious choice. Anytime you can describe cereal as ?cinnamonamony,? you know the gods are smiling down upon us. But those smiles quickly turned into jock asshole-like guffaws as Croonchy Stars was discontinued soon after its debut in 1988. But most of us would agree that 20 more years of commercials brimming with ?Bork! Bork! Bork!? would have been hilarious, even if Jim Henson would have sadly been replaced after his unfortunate passing in 1990. And the cereal was good! Cinnamon-flavored stars! How could that fail? Were their edges shuriken-shar or something?

As has been discussed, ?tiny dessert? cereal seems like can?t-miss concept. But that didn?t extend to Ice Cream Cones cereal, despite the presence of its own singing, bicycling delivery mascot, Ice Cream Jones. Sure, he may have been a little creepy, tracking down unsupervised kids on a camping trip in the middle of the woods in order to bring them breakfast, but he has cereal that tastes like ice cream, people! Crunchy cones and vanilla puffs? Ben and Jerry each came close to harakiri because they didn?t come up with this idea first. And what a catchy song from Mr. Jones himself! We hear he killed the other two Cinnamon Toast Crunch bakers and stuffed their bodies into his cart.

Forget that this ceral was produced by Ralston-Purina, a company best known for its dog food?this stuff was great! The masrmallow ghosts were so tasty, former champion Boo Berry slinked off to a ditch somewhere with a bottle of Old Crow. Though we still think R.P. missed a prime marketing opportunity by not including something like ?Made With Real Stay-Puft Marshmallows!? on the packaging.

Of course, by the time the second flick rolled around in 1989, Slimer was at peak popularity. His role in Ghostbusters II may have been limited, but his superstar status was evident in the cartoon, as evidenced by this clip. Seriously, there?s not even an actual Ghostbuster to be found! And why is Slimer helping kids with unlicensed nuclear reactors on their backs bring the pain to a ghost who actually seems pretty friendly? Ah, who cares;we?re suckers for Slimer marshmallows. And glow-in-the-dark boxes, for all those times we?ll be eating cereal in a broom closet.

Lucas, you can keep your damn Holiday Special in the vault forever, but don?t deny us our C3PO?s! Who cares if they were just fused-together Cheerios? Enjoying our morning routine with a picture of a Droid next to us was one of life?s greatest pleasures. And shockingly, Anthony Daniels was at his least annoying in the commercial, though it does beg for more explanation as to why he and R2 were cooking up batches of this stuff in what appears to be the Millennium Falcon?s hallway … after they?re seen running into a cave at the beginning of the clip. And there?s something very jarring about hearing C3PO utter ?May the Force be with you,? for some reason; since when does he have enough street cred for that line? But say it all you want, if it means we can dig into another blip-bloopin? bowl.

Nintendo wasn?t the first to capitalize on the idea of ?two cereals in one??Nerds Cereal had that covered much earlier in the decade with their separate cherry and orange flavors on each side of the box. But dear lord in heaven, how could we not have been foaming at the mouth for Mario and Zelda cereal? This writer, for one, still has distinct memories of arguing with his little brother over who?d get to eat a bowl of the Zelda half first?and who?d have to settle for a Goombah. (Notice in the commercial above how painful Mario?s transformation into a crunchy cereal bit appears.)

Despite kids all across this great nation completely losing their shit over Nintendo cereal, the love affair was brief?most likely due to parents realizing that two separate bags in one box actually made for less cereal, and was therefore not a good deal. But c?mon, we all know parents are stupid. And so we blame THEM for allowing this, the greatest of all cereals to not be given the proper shelf life, to have a sad, untimely demise. But at least we have the memories of polishing off a box in a single day … and that terrific theme song, of course. But if an ancient cereal like Quisp can make a comeback (It?s true! Go to a Dollar General store!), we?ll hold out hope that this System won?t be oppressed.