Menu
Home
>
Comics
>
Despite All Logic, There’s Going to Be a Watchmen Videogame 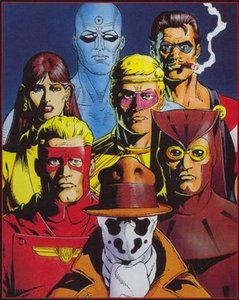 MTV’s videogames blog says they saw an in-development Watchmen videogame at last week’s E3, due from Warner Bros. Interactive Entertainment to come out with the flick. They also say it’s a beat-em-up starring Nite Owl and Rorschach set in the ’70s, thus acting as a prequel to the comic/movie. What they don’t explain is why anyone on God’s green earth would think this is a good idea.

In the gameplay demo MTV News witnessed, the ink-blotted anti-hero Rorschach bull-rushed a gang of attackers in a dark alley. A bronze-costumed Nite Owl backed him up with a more technological attack, using not just his fists but gadgets to electrify his foes. The developers first played the game for us as a single-player brawler and then in split-screen co-op.
…
Game producer Andy Abramovici told MTV News that Nite Owl and Rorschach will be the main characters of the game, though he didn’t rule out the possibility of other “Watchmen” icons appearing. The developers have tried to give Nite Owl and Rorschach distinctive fighting styles and mannerisms. One example: Rorschach skulked around part of a level with his hands stuffed in his trench-coat pockets. Nite Owl moved more like a hero. The story will be told between combat scenes, though in what manner is still being kept secret. The fighting scenes will be programmed to merit the game an M rating and, Abramovici said, the developer is striving to have players fight up to 20 onscreen enemies at a time.

Correct me if I’m wrong, but I think Watchmen is more about themes and issues than action, and making a beat-’em-up out of these characters is like making a Dark Knight game where all he does is try to pop matching colored bubbles (you know what I’m talking about). If Alan Moore doesn’t have a heart attack from his hatred of the Watchmen movie, this game might well put him over the edge?hey, maybe that’s the point. Maybe this is all some elaborate plot by some DC exec to make Moore so mad his massive mane of hair catches fire, and then DC can play merry hell with whatever Moore creations they want.