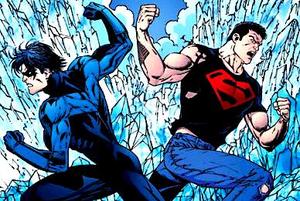 With the country’s premiere pop culture convention going on?which only marginally has to do with comics anymore, but is still called Comic Con?I figured TR could help pay lip service to SDCC’s original goal with a little help from Superboy and Nightwing. It all starts when Superboy heads off to Gotham to find Robin and inadvertently catching Nightwing in hot pursuit.

?Superboy? What?re you doing here?? Nightwing asked as he saw the floating teen. Kon wasn?t pleased but he still looked around the room to see who Nightwing had been chasing.

No one was in sight in the room. Apparently they were in some sort of wrestling room, the floors covered in the standard wrestling mats. There were no windows and no doors other than the one they?d come through.

?Who were you chasing?? Kon asked, the thought popping into his mind.

?Harley Quinn,? Nightwing answered, a hint of anger in his voice. Before Superboy could think much about it, there was a strange sound. The wrestling dummy in the corner of the room slid back wards and a familiar head popped out of the hole in the ground that had been opened.

?You called?? Harley Quinn exclaimed with a laugh. She hoisted a bazooka onto her shoulder and fired. Instead of a missile of some kind, a large green ball was fired from the weapon. It was heading right for Kon but he didn?t seem to care. Nightwing however had a pretty good idea what it was.

?No! Don?t!? he yelled, but it was too late. Kon caught the ball easily in one hand and looked up in confusion. Seconds later, the ball exploded and sent a thick pink cloud all around. Kon was engulfed quickly, Nightwing followed soon after despite efforts to put on a gas mask of some kind.

Did the words “wrestling mats” send a shiver down your spine as well? Yeah, me too. Anyways, Harley’s ammunition begins to work its nefarious affects.

The thick pink cloud began to dissipate among coughing from Kon and Nightwing. While all Kon could think about was the strange heat spreading through his body again, Nightwing was reaching for an anti-toxin and trying not to look at or think about the teen that was nearby. The smile that had been forming on his face as he pulled the auto-injector out vanished when a strong hand grabbed his wrist.

Almost as soon as Dick Grayson turned to see who had grabbed him, Kon crushed their lips together. Willpower and his grip on the auto-injector slipped away as Kon forced his tongue into Dick?s mouth. By the time the auto-injector hit the floor, Dick?s gloved hands were slipping under Superboy?s shirt.

You don’t have to be the World’s Greatest Detective to find out what’s going to happen next. Just hit the jump.

Neither hero paid much mind to the tearing sound as the tight t-shirt was torn during remove, Kon removing his hands from Dick only long enough to get the shirt over his head before it was tossed to the floor. It as then that the acrobat felt it. The creeping, tingling sensation that the still rational parts of his brain identified as Superboy?s tactile telekinesis was busily unfastening parts of Dick?s costume!

Considering that Kon had seen Robin?s uniform enough, it wasn?t a surprise he could guess where the armored suit fastened together. There were only so many places it could do so and still be effective and comfortable. All these thoughts, along with most others, were washed from Dick?s mind the moment he felts that tingling sensation getting into his jockstrap. Dick pulled his mouth away from the teen of steel?s and met his lusty gaze. Mask covered eyes focused on blue ones before that cocky smirk graced Kon?s face and the clone moved back in.

In what had to be a burst of super speed, Kon had removed Dick?s gauntlets and shirt. And before they even hit the ground, the cloned teen was sucking and nibbling at Dick?s throat. As the moan worked its way out of his mouth, Dick?s hands were busy. Tracing over rock hard muscle, the acrobat?s nimble fingers make quick work of button and zipper. A little growl comes from Kon, the clone?s hands settling on Dick?s costume covered ass and squeezing as those fingers brushed the erection straining again the fabric of Kon?s boxers.

You know, I think most supervillains have overlooked the potential of a gay-bomb. Seriously, the first time you make Superman and Batman fuck each other, the next time you rob a bank, I bet they’re staying in. Maybe crying. The story gets incredibly graphic for here on out (no?really, really graphic) so here’s a feel of the best parts that are reasonably safe for human eyes:

Nightwing did not have the power of super speed but it would have been difficult to convince Superboy otherwise as he suddenly found himself naked, on his back, and with the older hero nibbling at his ear…

And here’s my favorite:

From within the boot, Dick removes a small black and blue capsule. A bit of pressure and Dick popped the top right off. Simple, non-toxic, environmentally safe, and completely harmless to human life. Bat Oil-Slick capsules. Useful for tossing around and tripping people up. And as it occurred to Dick, they made some pretty good lube too.

Alas, all good things must come to an end:

Slowly, thoughts of lying down and going to sleep began to burn away as the heat the pollen cloud had brought started to dissipate. … Panting and trying to catch his breath much like the clone before him, Dick Grayson looked around. Scattered clothing was located before the dark haired vigilante looked back at the prone form of Superboy.

?Dammit!? he cursed, punching the mat below. He was not happy in the least bit. Not only had Harley and Ivy?s slipped through his grasp, he?d been hit with the sex pollen again. And worst of all it had been with Superboy. Nightwing had a feeling that Robin was going to be pissed.

“Curse you, villainesses! You’ve made me fuck Superboy up the ass?but I’ll put an end to your reign of terror next time!” If you’d like to read author E-307’s opus in all its bodily-fluid-describing glory, by all means, read it here. Meanwhile, I’m just going to softly weep a little. Not much. Just a little.