Good lord. I knew there would be plenty of news coming from this weekend’s Joecon, but I didn’t expect the absolute invasion of announcement and pics that ended up arriving. If you’re a big G.I. Joe fan, you owe it to yourself to check out YoJoe.com or Hisstank.com to find out everything, but for you civilians, here’s what you need to know: 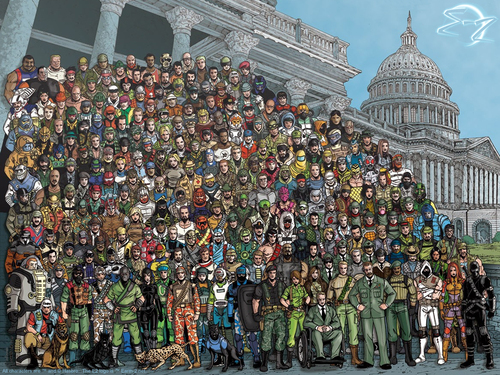 ? Wave 6 of the new Joe line will include Tiger Force Duke, Mutt & Junkyard, Mercenary Wraith, Croc Master, COBRA Para-Viper, COBRA Bazooka Trooper. There’ll also be a Firebat jet and the SHARC mini-sub-thing with Deep Six. Also, Hasbro will be making a few 12-inch Joe figures themselves, which look just pitiful next to Sideshow’s figures. Last but not least, there will be two Cobra 7-packs?Desert and Arctic?which are awesome. Check out pics here. (Via YoJoe)

? And what might be most exciting is that there’ll be a new Joe cartoon subtitled Resolute, which will be PG-13 and included bullets instead of lasers. Looks like Hasbro had given marketing G.I. Joe to those stupid kids and realized it’s us weird, obsessed adult collectors who are paying for all this stuff. Insanely, it’ll be written by Warren Ellis. (Via Hisstank)