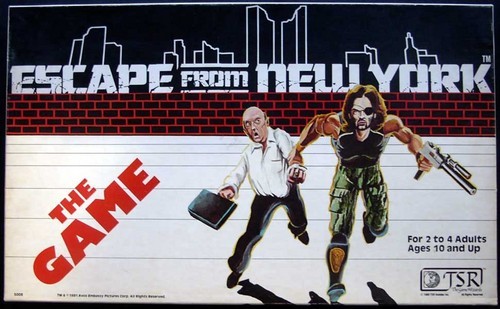 In the carefree days before the Internet, DVDs and the Xbox 360, one of the only ways to relive the magic of your favorite movie was through board games. If you are a child of the late ?70s/early ?80s, chances are you remember wasting countless hours parked down in front of your favorite movie tie-in game. Sure, these may have killed the time before V came on, but were they any good? Since the last thing most folks want to do these days is sit around and interact with other people for hours at a time, the movie-based board game is a largely a thing of the past. (With the exception of those bastardized versions of Monopoly). Which games recaptured the magic of their cinematic inspirations, and which ones rightfully made their way to the bargain bins? Let?s take a look. 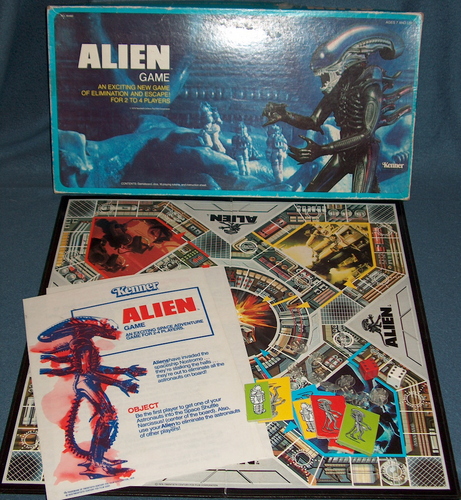 As if their 18-inch Alien figure wasn?t nightmare-inducing enough, Kenner unleashed this ?exciting new game of elimination and escape? upon kids in 1979. Complete with a mock blood-stained directions sheet, the game had players attempting to reach the Narcissus safely before being ruthlessly slaughtered by an Alien. Whoever completed this task first was the winner. In reality, the player who didn?t piss the bed afterwards was the true victor. This one was geared at players aged 7 and up, because getting mauled by a horrifying outer space monster with acid for blood would have been way too intense for 6-year-olds. Jesus. 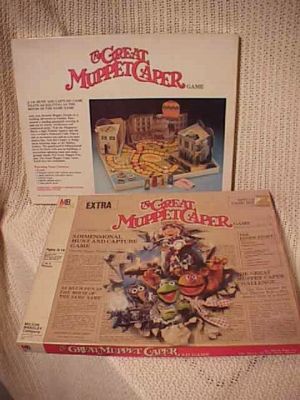 Much like the movie it was based on, this game offered up plenty of spectacle, fantasy and derring do…but man was it a bitch to put together. I have vivid memories of my father preparing to throw this game across the room while trying to assemble the Mallory Gallery. Once the 3-D representations of buildings from the film were finally constructed (meaning that you had to disassemble the damn thing every time you wanted to put it away), the aggravation was quickly forgotten and players got to maneuver Beauregard?s taxi and the Happiness Hotel bus through a replica of a London street with hopes of being the first to get their hands on the fabled Baseball Diamond. It?s bulkiness aside, what made this piece of merchandising magic so special was how it used the game?s oversized board to perfectly recreate the film?s settings and atmosphere.

Okay, technically this isn?t a board game, but this makes the list for sheer coolness alone. Essentially a variation of Perfection and Operation, this game had players attempting to fish out nautical crap from the Great White?s mouth using a gaff hook before his spring-loaded jaw snaps shut. The only thing that could make this game better would be if players could retrieve Alex Kinter?s torso or Mayor Vaughn?s anchor suit from the fearsome fish?s belly. If you track this one down, be sure to take your turn first, as Jaws? jaw invariably slams shut as soon as the second player has a go. 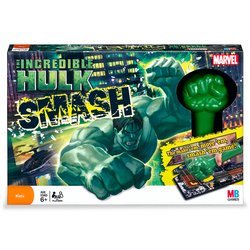 When I was a kid, the only thing I liked about going over my cousin?s house was that he had a Hawaiian Punch board game in which players could smash pineapples made out of modeling clay. I couldn?t tell you what the game was about, I was too focused on obliterating those goddamn pineapples. With the recent release of The Incredible Hulk: Smash, an new generation can experience the same visceral thrills that so enraptured me as a kid. Using a mold and Play Doh included in the game, players can make a car or plane and travel around the board, hoping that their friends don?t demolish their vehicle with a big green Hulk fist known as the Smasher. The first person that makes it out of the city without being smashed wins. Simple and easy. Although, kids who get this game are probably just gonna beat the hell out of each other using the Smasher. That?s kinda awesome.

Giving you the ability to play as a zombie (whereupon your goal is to kill three people) or as a human (in which case you have to secure the mall before it?s overrun by the flesh eaters), this game adaptation of George Romero?s masterpiece proves that you can do so much with just a flimsy play map and 90 minutes to kill. Originally released by small gaming outfit Simulations Publications Incorporated in 1978, this notoriously hard to find release is so difficult to track down than several rip-offs and fan-made recreations have popped up over the years. (The best of which can be found here). Download it and immerse yourself in the brain-munching fun.

Hit the jump for the 5 worst movie-based board games ever made.

5) Left Behind: The Movie: The Game 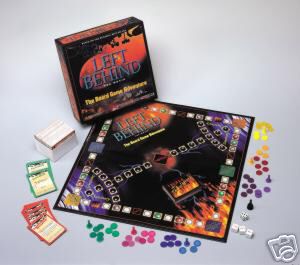 ?Mommy, buy me that game about all the soulless heathens who are stuck on Earth to suffer after Jesus swoops up all the good people to heaven.? Okay, this one is an easy target. I?m willing to bet that most Topless Robot readers aren?t exactly big on fundamentalist board games. And in the interest of full disclosure I haven?t played this one. If Larry the Cable Guy had a Git-R-Done Hoedown game, I?d crap all over that too without opening the box. It?s the same thing for the same people. I know I?ll probably be removed from Kirk Cameron?s Christmas card list for saying so, but there?s no way this game is even remotely entertaining. Show me a kid whose last name isn?t Flanders who is clamoring for some Tim LaHaye and Larry Jenkins-approved freetime fun. You can?t. And why would this game?s target audience even want to spend their final days hunkered down in front of this? I imagine that there?s a lot to do in preparation for the End Times. This game confuses and frightens me. Moving on…

Much ado has been made over the fact that the Atari E.T. game was such a disaster that thousands of unsold copies of it wound up in a New Mexico landfill. Well folks, Parker Brothers? board game based on Steven Spielberg?s heartwarming family favorite wasn?t much better. In this affront to plastic and cardboard, you had to move an annoyingly cute E.T. figure around the board, assembling pieces of the communicator so that he can phone home and have his spaceship rescue him. Whatever. The problem was that gameplay took FOREVER and was about as much fun as doing word problems while at the dentist. The kids in the above commercial love it. I hope their lives turned out miserable. 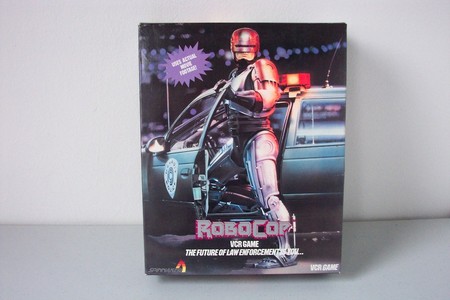 Robocop is easily mankind?s greatest achievement. To paraphrase Jack Black?s Evil Dead 2 speech in High Fidelity, it?s a brilliant film, it?s so funny and violent. To this day, I can?t see Ronny Cox in anything without declaring ?I had to kill Bob Morton because he made a mistake, and now it?s time to erase that mistake.? My point is, this film is Bert to my Ernie. This game however, not so much. You have to remember that in the late 1980s, VCR games were all the rage. Well, they tried to be anyway. The problem is that by incorporating board game play with a VCR component, everything took three times as long as it should. You had to cue the tape up, you had to drudge around the board waiting to actually watch a heavily edited scene from the film. It was about as thrilling as watching Robocop 3, or god help you, the TV series with the giggle-inducing villain named Pudface. I played this once in middle school and my friend?s VCR ate the tape. Fitting, I felt.

Although it?s a huge turd, this game from Dungeons & Dragons creators TSR is one of my prized possessions. You see, I?m totally convinced that I pulled a Dreamscape and willed it into existence. During one of my recurring dreams in which I was in a long-gone toy store picking up Mego figures on clearance, I saw an Escape from New York board game by the cash register and promptly snatched it up. After I woke up the next morning and realized how utterly pathetic even my subconscious life was, I headed out to one of the vintage toy stores I frequented and lo and behold, there it was!. After getting it home, it quickly became apparent that at no point in the game was I going to get to encounter The Duke or that chick from the Chock Full O?Nuts. No, instead I got to meander around the board in search of missing documents and a president whose appearance on the box cover looks more like famed suicidal politician Budd Dwyer than Donald Pleasence. My dreams always betray me. 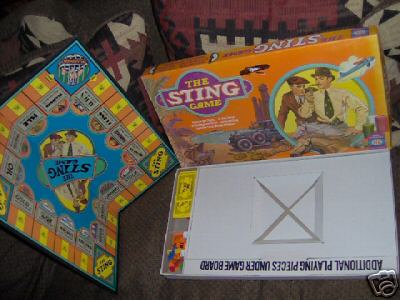 Remember in that episode of Freaks and Geeks when Mr Weir was trying to get Sam and Lindsay to play that stock market game The Pit and they just didn?t give a shit? Same deal here. This is something that you?d have to play over at your grandmom?s house, and not the cookie-baking, surprise Star Wars-figure-giving one either. I?m talking the bullshit granny whose home is populated by Emmett Kelly clown statues and the smell of dead dreams. Kids aged 10 and up don?t want to play games based on Newman and Redford films. They want to smash clay pineapples and eat brains. Fuck this game.