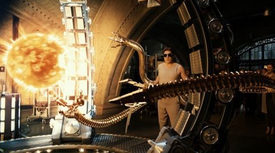 They say it?s the Summer of the Superhero Movie, but for our money, it?s the supervillains who are making the season bright. It seems like fanboy filmmakers are taking a refreshingly back-to-basics approach to their baddies this year, wherein rather than cooking up some outlandish sci-fi scheme, they?re simply pitting the heroes against mean versions of themselves?Iron Man fights a bigger, stronger guy in armor, the Hulk fights a bigger, stronger steroid abuser, Hellboy fights a creepier, spookier guy in prosthetic make-up, Batman fights a scarier, crazier sociopath with a funny voice, and so on.

This recipe for success seems simple to follow?until you look back on superhero movies gone by and see just how many times perfectly good plots about people in gaudy costumes punching each other have been ruined by ridiculous junk-science in weaponized form. As if taking a cue from the old Adam West Batman movie in which the villains use Commodore Schmidlapp?s Total Dehydrator to turn the United World Security Council into piles of pastel pixie dust, these ostensibly sophisticated superhero blockbusters?crafted by a committee of shrewd studio businessmen, state-of-the-art visual technicians, and people with movies like The Usual Suspects and Memento on their resumes?center on weapons of mass destruction so silly, so illogical, so intelligence-insulting, you half-expect Dick Cheney to claim Iran has them. (Zing! I got you, Bush Administration!)

Below you?ll find a half-dozen of the dumbest doomsday devices the studios have ever expected us to accept without blinking, simply because a lifelong love of nerd culture has left us with crippling self-esteem issues that turn us into mindless drones anytime we hear the words ?Daily Planet? or ?Cerebro? from the mouths of glamorous movie stars and/or Sam Raimi. Hey, wait a minute?maybe these crappy movie menaces are the most dangerous doomsday devices of all!

6) The Penguin?s Army of Rocket-Launching Penguins from Batman Returns

I?m not one to hold supervillains? taste for thematically appropriate weaponry against them. I?ve got no problem with the Joker poisoning Gotham City with parade balloons filled with Smilex gas in Tim Burton?s first Batman film, while Mr. Freeze freezing Gotham City in Joel Schumacher?s execrable Batman & Robin may be the only character development that made sense in that entire movie?I mean, his name is ?Mr. Freeze.? But something about the sight of Danny DeVito?s Penguin threatening Batman?s burned-out burg with masses of mind-controlled Antarctic waterfowl toting candy-striped rockets is too ridiculous even for Burton, who was already showing signs of his downward trajectory from visionary filmmaker to self-parodic Hot Topic Idol. It?s like March of the Penguins by way of Leni Riefenstahl and Ambien hallucinations.

?Hi there! My name is Otto Octavius, and today I?ll be conducting an experiment with cold fusion designed to produce?and I quote from a screenplay that Pulitzer Prize?winner Michael Chabon was involved in for some reason??the power of the sun in the palm of my hand.? I?ll be doing this in the middle of Manhattan, because what could possibly go wrong? Fortunately, like all self-sustaining nuclear fusion reactors, it can be extinguished by dipping it into a river, which is why we must make sure our solar system?s sun never gets wet. Also, because I?m a brilliant physicist, I can also develop advanced artificial intelligence systems like these mechanical tentacles I?m using, since being a scientist means you?re good at everything science-ish. This same principle explains why you can get a quadruple heart bypass from your orthodontist.? Your Best Superhero Movie Ever, fanboys!

4) The Riddler?s Boxes from Batman Forever

In Joel Schumacher?s first Batman film, the Riddler sends Batman on a frantic chase all over the city, forcing the hero to solve increasingly difficult riddles and puzzles lest he detonate a series of explosives and slaughter countless innocent civilians. Oh, no, wait, I?m sorry, that?s what Simon Gruber does to John McClane in Die Hard with a Vengeance. In Batman Forever, the Riddler menaces the Dark Knight primarily through atrocious comedic overacting. But in addition to a performance that makes his star turn in Ace Ventura 2: When Nature Calls look like something out of The Bicycle Thief, Jim Carrey?s character menaces Gotham City with ?The Box,? a virtual-reality device that secretly drains viewers? brainwaves (science!), reads their minds (double secret science!), and makes the Riddler smarter (triple dog science!), all while emitting a green glow like an Ecto-Cooler processing plant and forcing its victims to make dopey Looney Tunes faces. Riddle me this: Who comes up with this mishegoss?

Because you demanded it: A superhero movie in which the thrilling climax pits our hero in a battle to the death against?a land mass! We?re not sure where in the DC Multiverse Bryan Singer?s film is supposed to take place, but it must be on some Earth without plate tectonics, because only on such an Elseworld does Lex Luthor?s plan to grow a continent from kryptonite shards, sea-monkey-style, and charge a fortune for real estate on it make any sense. Too much of a go-getter to wait around until the imploding housing market thwarts Luthor?s nefarious scheme, Superman takes a break from his busy schedule of stalking Lois Lane and not throwing punches to hoist the entire island?which, need we remind you, is made of a substance lethal to Man of Steel even in small, jagged, Christ-imagery-inducing shards?into space, where it and the Superman film franchise remain to this day.

The Bat-films? third and final ignominious entry in our countdown, Christopher Nolan?s Batman Begins was touted by its (sadly misguided) fans as the most realistic take on the Batman concept yet. So maybe these people can help me wade through the thigh-deep swamp of utterly un-realistic stupid surrounding the ?microwave emitter? that arch-terrorist Ra?s al Ghul planned to use to vaporize Gotham City?s water supply and thereby unleash the Scarecrow?s fear toxin, with which they?d already laced the water supply, into the air. First of all, Ra?s? plan to punish Gotham for being such an inhuman hellhole is to make it, um, more of an inhuman hellhole. (And by the way, Ra?s? organization was the reason it got so bad in the first place. Screenwriting!) Second, if this thing vaporizes any water within a certain radius, shouldn?t the 60% of our body weight that consists of water turn us into steaming-hot geysers on legs? Finally, and I?m going to address Ra?s and his men directly on this one, you already poisoned the water supply, you dumb fucks! Maybe developing a substance that took effect when people drank the water might have been worth a couple extra zeroes for the ?fear toxin? line-item in the League of Shadows R&D budget.

Bryan Singer?s first X-Men film is widely seen as the start of the modern wave of respectable superhero movies. (That?s actually incorrect?Blade kicked them off, but that movie is largely ignored because nerds are racist. HAHA J/K LOL) And you know what? It?s actually pretty good! Fine performances from two respected Shakespeareans, a more plausible look for the costumes that set the tone for all superhero outfits to follow, impressively imaginative and destructive fight scenes, a firm grasp on the ?mutants as minorities/gays/geeks? metaphor, an Aussie musical theater veteran riding a muttonchopped, claw-wielding Canadian mass murderer into overnight stardom?and then this, the perfect storm, the ne plus ultra of Dumb Doomsday Devices. See if you can follow me here: It?s a machine?that uses magnetic force?provided by a mutant?who?s draining it from another mutant?to alter people?s genetic structure?and change them into mutants?which will subsequently kill them?and its target is a United Nations Ethnic Stereotype Summit?and it?s mounted on the Statue of Liberty?s torch. Homo superior my rosy Irish ass.