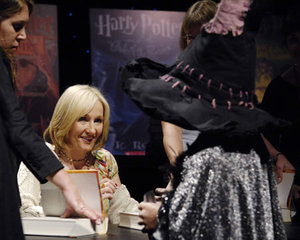 It’s been nearly a year since the thick, mortar-sized final volume of Harry Potter’s travails through Hogwarts reached the grubby hands of children and developmentally stunted adults around the globe. Its blockbuster sales launched J.K. Rowling’s financial assets higher than even the goddamn Queen of her own fucking country, spawned a global household name along the same pop-culture frequency as Mickey Mouse, allowed the Potter Puppet Pals to exist, and singlehandedly proved that kids of all ages are totally down to put aside their hyperviolent Murder Simulator Video Games on their Atari Game-Boxes and read a damn book.

Of course, it also created a legion of retarded fans unheard of since the throes of Star Trek, dozens of lame knockoffs, and other weird shit. Here’s some of the worst things the boy wizard’s global success has brought to this already cold and dark universe.

6) No The Books of Magic Movie 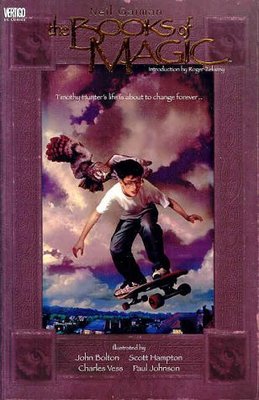 Poor Neil Gaiman. Okay, not really poor Neil Gaiman; he’s a bestselling author with a diehard, somewhat crazed fanbase and several awards and accolades for his voluminous body of work. Still, his ventures into the seedy realm of Hollywood have been far less successful: his English-language draft for Princess Mononoke was essentially entirely re-written, his scripts for Good Omens and other novels have been rotting in development hell for decades, and his only reasonable Hollywood adaptation, last year’s amiable Stardust, was a tepid box office pseudo-success.

The most troubled of all of Gaiman’s diseased film adaptations is a big-screen version of his uniquely weird and wonderful 1989 comic series, The Books of Magic. They feature the misadventures of a scruffy, bespectacled lad named Tim Hunter, as he grapples with the discovery that immense and powerful magic flows within him, and thwarts the dark forces that swirl around his magical universe, attempts to locate his estranged parents, encounters various mythical beasts, and other oddly Potter-ian things.

The Books of Magic is a much darker beast than even the bloodiest Potter chapters, including some extremely frank sexual themes, and Gaiman himself is rather cool and cordial about the Potter similarities, saying that J.K. Rowing and he pooled their ideas from “…the same sources,” such as T.H. White’s The Once and Future King, and Joseph Campbell’s mythological canon. Of course, cool and cordial doesn’t really get movies made very often, and despite being optioned by Warner Bros. in 1998 and several attempts to “de-Potter-ize” the story, the film is unlikely to ever see the light of day.

Harry Potter is, obviously, a monolithic success. Aside from the usual religious nutjobs who thinks that everything fun is immoral, everybody loves it. Kids are reading! Adults like it too! Hollywood has another tentpole multimillion-dollar film franchise that isn’t based on a comic book! Hooray!

But… what will the kids read when Harry Potter is over? In the years since Potter’s introduction a number of copycats and also-rans have vied for its throne atop the book publishing world. His Dark Materials and The Chronicles of Narnia have certainly benefited from the exposure, sure, but those series are already completed by their respective authors. Publishes and steel-eyed Hollywood executives are hungry for The Next Big Kids Book Thing, and somehow, they settled on… Stephanie Meyer’s Twilight series.

Imagine Anne Rice For Kids, with all the ambiguous sexuality and carnality filtered through a CosmoGirl op-ed piece written by a Mormon housewife. They’re not bad books, in the literary scheme of things, but part of Harry Potter’s success was its wit, charm, and steady plotting which made for fun reading for anyone of any age. Meyer’s Twilight books are soapy teen novels written for the entertainment of soapy teens and few others.

4) The Resurgence of Chris Columbus’ Career 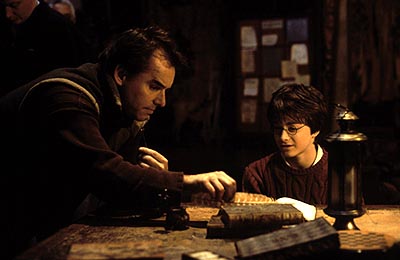 How could a guy go from writing early screenplays of two of the most awesome ’80s movies ever, Gremlins and The Goonies, to foisting upon the world the most loathsome, execrable chick-flick ever made, by which I am referring to Stepmom? And also Bicentennial Man, possibly the most boring movie ever made to feature Robin Williams trying to actually act inside prosthetics.

Somehow, the stars literally aligned themselves and Chris Columbus was chosen by Stephen Spielberg himself to direct the first two Harry Potter movies, which were passably okay by most standards at the time, despite the incredibly shitty CG, but are now uncomfortably unwatchable due to the fact that the following films by directors with talent and vision are infinitely better.

I would give Chris Columbus credit for handing directing reins to the wonderful Alfonso Cuaron for the third film, but he’s currently filming I Love You Beth Cooper!, which is based on a book by shitty, third-rate, post-season-9 Simpsons writer Larry Doyle. Perhaps afterwards he’ll go back to work on his magnum opus: Home Alone 5: 120 Straight Minutes of Men Getting Hit In the Nuts, Followed By 5 Minutes of Syrupy, Manipulative Schmaltz To Try And Make Your Mom Cry.

The increasing, frothing demand as the Potter books got longer, darker, and downright labyrinthine in their plotting led to long, long lines at bookstores ’round midnight on release day. Asshole nerds, who are peculiar in that they are both the worst type of asshole and nerd in existence, devised new ways to extend their insufferable but relatively harmless internet prankery into the real world.

Thus, mere seconds after photographed copies of Harry Potter and the Half-Blood Prince found their way onto the internet several days before the book’s official release, the various failures of humanity that compile most of websites like YTMND and 4chan took to the streets, yelling and spoiling the big cliffhanger at the end of the book in order to see the shocked, horrified faces of other nerds. This is also one of those peculiar situations where Schadenfreude applies in more than one instance. 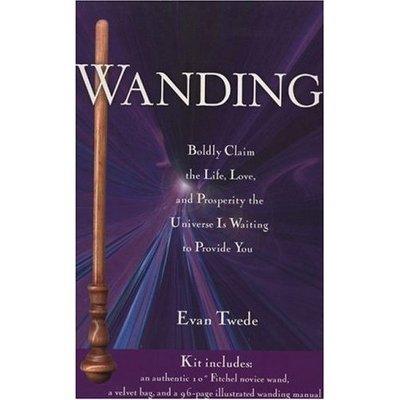 I’m fairly certain that Harry Potter author J.K. Rowling, smart person that she is, intended the usage of wands and magic spells to, you know, sound kind of silly. But they’re meant to be, as Rowling and every sane person knows that magic isn’t real and that by waving around a little wooden stick and chanting made-up words you are either confirming to the world that you are playing pretend and having fun, or that you have personal demons caused by immense drug addiction or schizophrenia.

But why let common sense get in the way of spending $10.71, plus shipping and handling, on the Wanding Book and Kit! Never mind that the actual term “Wanding” sounds like either an uncomfortable Airport security check or an even more uncomfortable sexual act, but by waving around a mass-produced wooden wand and saying magic words you can make more money! Lose weight! Have lots of sex! Legal sex! It’s an unholy marriage of self-help bullshit with crazy bullshit, that would be convincing as a joke were it not for Harry Potter’s notably insane fans (see below). Also, it would be easy to think of this thing existing outside of Harry Potter’s influence if not for the delicately-modeled-after-the-Harry-Potter-Movies wooden wand.

The only thing that makes me not completely hate this thing is that it gives us perhaps the nicest one-star review in Amazon.com history:

“OK, I’m rather embarrased that i bought this… Fact is, I was searching for cool toy wands, and came across this kit (which I had seen in the bookstores) for just a couple of dollars. For a couple of dollars the little toy wand is cute, in a nice velveteen pouch. The book is mainly annoying in its constant efforts to pass some simple occult and magical ideas off as ‘not spells’ or ‘not sorcery’. The core ideas for using a wand for specific spell-casting aren’t bad, but the fakey window dressing is just silly.
Don’t pay more than $3 would be my advice 😉
Ian” 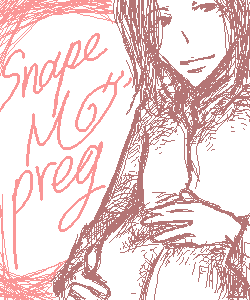 General fan wankery amongst hardcore Harry Potter devotees is the stuff of legend. Harry Potter has, as of this writing, 360,039 entires on Fanfiction.net alone. For comparison, every single Final Fantasy game combined has only 48,977 entries. Harry Potter fan wankery also has earned the distinct award of being by far the gayest of any fandom out there that isn’t related in any way to furries or something, which is quite a feat considering how much Yaoi is out there.

If there’s any one thing to nail down how specifically and completely fucked up a lot of the hardcore, sexually frustrated Harry Potter fans are, it’s MPREG. For those (luckily) uninitiated, MPREG stands for Male Impregnation. Or maybe not, since I refuse to look too specifically into the matter, but the gist of it is that there is a large contingent of grown men and women writing, drawing, and fantasizing about Severus Snape getting a large, distended belly that is filled with the seed of Harry or Draco or Ron or even all three, utterly defying any sense of logic and human decency with the simple theory that Harry Potter has magic, anything can happen!

I leave you now with an excerpt from Bleudiablo’s MPREG Harry/Snape fanfic, “Someone Else’s Father”:

She blinked then moved her gaze from Harry’s abdomen to Severus, “He’s aborting.”

“But there is no blood,” Severus replied, not arguing about the fact that his mate was -had been- pregnant, many male wizards, especially powerful ones could get pregnant.

“It’s a magical abortion, his body is reabsorbing everything, I doubt he even knew he was pregnant but he no longer is. I think the shock of finding out about you and father made something in his subconscious abort.” Severus shivered and grabbed his mate’s hand, he was sorry that they wouldn’t be having a child soon but Harry was more important, “Will he be okay?”

“Yes, he should wake up in about an hour but will be weak for about a week, he shouldn’t do any unnecessary or strong spells but there is no real danger with magical abortions. I’ll contact Albus tell him he’ll need someone to teach both of your classes tomorrow.”