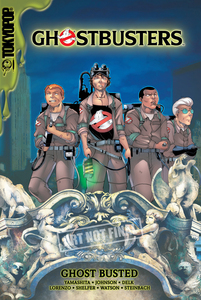 Between the recent announcement that Japanese mega-publisher Kodansha was opening up a U.S. branch to their recent lay-offs, company split and brouhaha over their creator submission contracts, manga publisher Tokyopop has been in serious trouble. I was ready to write ’em off, but they have two announcements that have shut my trap: they’ll be making manga-style comics of both Ghostbusters and Battlestar Galactica.

Tokyopop actually made some Star Trek faux-manga back in 2006; I don’t know how well it sold, but I thought it was a terrific idea. See, manga fans don’t like OEL (original English-language) manga, because the art and story-telling is usually inferior to authentic, Japanese-made manga, plus, there’s tons of real manga to buy anyways. Meanwhile, the non-manga-fans who want a new Star Trek comic don’t care who draws it, so it’s better to hire some schlub in Des Moines than pay top-yen for a Japanese artist.

Both Ghostbusters and Battlestar Galactica have significant fan bases, which are hungry for more stories in their universes, and manga is generally cheap, and give more bang-per-buck than regular comics. I can’t think of a better or, actually, another) way that Tokyopop can turn their fortunes around. They can’t get more high-tier Japanese manga, and no one cares about their non-license based OEL manga. Of course, if the art and stories suck, then the licenses won’t do any good. There are plenty more details about the Ghostbusters title at Newsarama, and a tiny bit o’ news about BSG at ICV2.