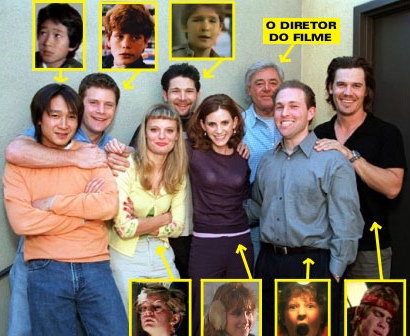 Actually, I consider this a Goonies news trifecta, since I believe the above picture found by /Film?showing the cast together after, what? Fifteen years??is newsworthy in and of itself. Who shot this? For what? What the hell were they all doing together? Madness.

If you don’t count the photo, the first real news is that Moviehole is reporting that Warner Bros. is planning on The Goonies 2 being a big summer release for 2010, instead of the long-rumored straight-to-DVD crap-out that had previously been planned. Last I heard, the movie was going to star the assumably goonalicious kids of the original Goonies, but who knows if that’s true.

In more concrete, consumer-friendly news, /Film also has this pic of an unbelievably awesome pair of Goonies-themed Puma shoes. The shoes, which will be available in December, use Puma’s new Disc Blaze Closure system, which is like velcro for grown-up douchebags, apparently. I would love it. I hate tying my shoes.