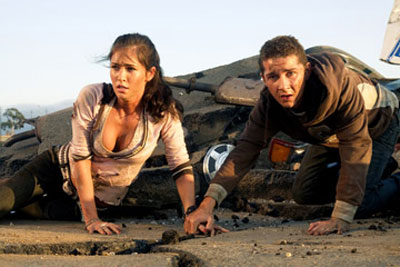 You may have heard that Shia the Beef was in a car accident recently, and if so, you didn’t hear it from me. I only cover celebrity nonsense when it affects something nerdy. And now the Beef’s accident does?he mangled his hand, requiring a cast, which has screwed around with production on Transformers 2, directed by Michael Bay…but not for long.

See, there’s nothing auteur Michael Bay can’t film around; much like the similarly talented Ed Wood, who hired some guy to pretend to be Bela Lugosi after he died during the filming of Plan 9 from Outer Space, Bay is just going to “write in” Shia’s new fucked-up hand into the script, which is surely such a masterpiece of storytelling that it can handle such an addition at this state of production.

I can only imagine two ways Bay’s going to have Shia the Beef’s character’s hand mauled in the movie: 1) the evil Decepticons’ new plan for domination now involves slamming Sam Witwicky’s fingers in one of their car modes’ doors, or 2) Optimus Prime, as clumsy as all the other Autobots, accidentally steps on Sam’s hand when trying to get a better angle in which to pee on John Turturro. You guys have any other theories? (Via Us)