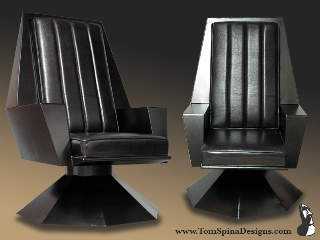 From the fine folks behind the Han Solo in Carbonite Office Desk comes the next high-end, Star Wars-themed office equipment you desperately want but cannot afford?the Emperor’s chair. The good news is, unlike the desk, there’s five of them for sale; the bad news is that they’re each $5000, so you can’t afford one anyways. From the press release:

Based on the client’s requests and interests, artists Tom Spina and Richard Riley drew inspiration from elements of Captain Kirk’s bridge chair from Star Trek and the Emperor’s throne from the Star Wars films and created a sleek new design. The result is an impressive functional art piece that is well over four feet tall and crafted in custom welded steel. It features an adjustable pedestal and is made to appear to ?float? on 8 hidden wheels. The custom upholstery is real leather and the finish is powder-coated gloss black for a classy and durable surface.

What, you think it’d be some hunk of plastic? Remember, the Emperor is an old, crotchedy man?you know his bony, liver-spotted ass is covered with hemorrhoids, and he has to sit in as much comfort as possible. And now that I’ve made you think about the Emperor’s bare ass, my work is done. Toddle-pip! (Via Gizmodo)