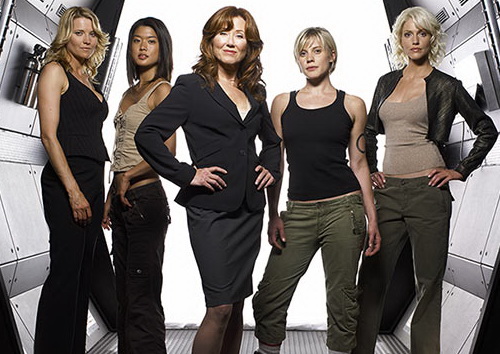 If you were mildly disappointed about the post-apocalyptic state of the Earth, as seen in the final moments of the first half of the fourth season of Battlestar Galactia, Aaron Douglas?a.k.a. Tyrol?has some spoilers for you. I’ve put them after the jump for safe-keeping.

According to Ain’t It Cool News, Douglas?who plays Galen Tyrol on the SciFi Channel series?said that fans don’t have to wonder if the humans will ever have a chance to visit the Cylon homeworld. That’s because they’ve already seen it.

“You did at the end of the middle of Season 4,” Douglas told Cort and Fatboy on KUFO-FM. “Earth, in the scriptures, is the Cylon homeworld. Yeah, they say they found evidence, they found other people, and they’re all Cylon. Or they found bones and stuff scattered all around, and they’re Cylon.”

The “Earth” found in the mid-season finale is actually what writers called “Earth 1,” a source told SyFy Portal. A catastrophic event happened that destroyed the planet, but the people of this Earth actually fled to a new homeworld, also called Earth, and the planet where all of us viewers are now standing on.

“What Aaron is trying to say is that the actual word for ‘Earth’ in the scriptures is ‘Cylon,’ and it reveals a lot about what we’ll learn of the Final Five and their origins.”

Uuuuuhhhh-huh. I’m down with the Cylon means Earth thing, but now there’s a second Earth? That’s…kind of lame. It’s a huge cop-out, on a show that swore they’d never do cop-outs, and it’s also the plot of countless terrible ’70s sci-fi stories (most of which had the second Earth on the exact opposite side of the sun in the same rotation). I guess the BSG folks should get the benefit of the doubt, but right now, I’m not wowed. Oh, also:

In other spoiler reports, SyFy Portal has previously reported that the identity of the final Cylon could come as early as the mid-season premiere, or the second episode, especially since it had originally been planned for the mid-season finale that aired last summer on SciFi Channel, but was bumped to a slightly later episode.

Well, at least we’ll be getting that out of the way.