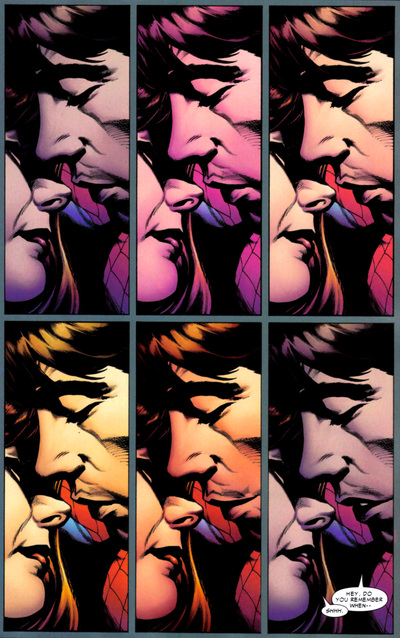 All right, kids, gather round. Uncle Rob has a story to tell. Grab your blankets and your steaming mugs of cocoa…and you should probably put on an adult diaper, because if you’re reading the following story, you’re clearly a diaper fan. Author yami_joeys_dog has created an epic tale with three separate storyline which don’t intersect, but as they involve one or more of the cartoon Teen Titans forced to become babies, wear diapers, soil themselves and have incredibly disturbing sex, they certainly illuminate each other. Now, of the three storylines?the first involving Raven trapped as a baby/sex toy for Jade (no idea), the second involved Beast Boy having sex with the female Argent who in this story has a penis (also no idea)?I’ve chosen the Robin one, which begins when he enters former enemy Gizmo’s lab.

“This must of been Gizmo’s old room, before he was kicked out of the hive for turning mega perv..” Robin muttered, looking around a room filled with numerous holes for robot arms it seemed, and a spanking tabel with a auto mated spanker..a enema bag..and some things Robin didn’t even wanna guess.
“Damn he was twisted..” Robin said, turning around and going to hit a light switch, and turned on the machines in the room instead.
the door shut, locking and a arms came down as a automated voice came on.
“Welcome back wittle miss Gizmo. is the sissy baby back from sucking lots of cock?”
“what the..” Robin said and then swung his bo taking out one, two arms but two more grabbed his arms, the arms made to have Mammoth’s level of power, and more still grabbed onto his legs and removed his belt, cape, pants…
“Somebody isn’t wearing their panties!” Came the computer, as robin’s boxers were taken off.
red faced he wiggled helplessly but was pinned down a to table.
“I’m not Gizmo you daft machine!” he yelled!”
“Tsk tsk, such a mouthy thing!” The computer tsked.
A cock shaped paci, the dick based off of Mammoth’s cock was popped in robin’s mouth, and tied around his head with pretty pink ribbons.
the boy wonder was forced to suckle and wiggled about humiliated beyond belive.
“So, you finally had a growth spurt! I suppose even a closet sissy fag like you were due..and you grew hair!” The computer taunted, as a special spray was brought out.
“Still have a teenie wienie baby dick though..”
Robin’s cock was indeed small…

Only tragedy awaits after the jump. Hit it, and you will never again know happiness.

I should point out that Robin also has breasts at the moment, after being sprayed with a mysterious compound. Also, I’m editing out a great deal, since I would hate for you all to kill yourselves?I need the hits.

“N-No! this can’t be happening!”Robin whined in his head.
a hand came down that was able to produce baby oil as needed, and it started to rub down robin’s nether regions, making his tiny dick all stiff as it was rubbed, and then gently lubed his asshole.

Gently is not an adverb that will used a second time in this story.

“mmm, you love this don’t you baby girl..you love being a little cock fag.. you love you’re sissy pussy being played with..take a deep breath sissy, mommy bot needs to make sure you don’t make a stinky mess..”
Robin barly heard the computer, and whimpered softly as the hand pulled away, and then caught site of the monster cock shaped butt plug heading for his asshole and squealed.
slowly, painfully, he was invaded with it, and felt like he wouldn’t be able to hold his shit in again if this was ever removed.
the thick diaper was pulled up and taped, and the plug started to vibrate softly rubbing agint robin’s prostate as arms lifted him up.
Help up like a baby, pretty pink slippers were put on his feet, and then a adorable pink singlet covered his chest sporting double d’s, and his puffy diaper butt, and the look was completed with a tutu tugged around his waist.
“Casting call for a sugar plum fairy! oh wait, guess you’re just a fairy..” The computer teased, and a hand came up and patted his back side.
helpless, and teased and petted, Robin did the only thing he could done, and filled his diaper [CENSORED FOR SANITY], moaning girlishly as Starfire burst in the door.
“Robin?!”

Rut-roh! But who hasn’t been busted by the object of their affections while in a fairy outfit with a cock-shaped pacifier in their mouths? Naturally, Starfire understands, and helps free Robin from the diabolically perverted machine.

Robin watched in amazement, as Starfire destroyed the machines with ease, the same machines that had reduced him to a little sissy.
Starfire let losses Eye beams that sliced though the wall, as she searched for the main computer in order to end this once and for all.
…
As the room shook all around them, most of it’s supports having been toasted, She rushed forward, and grabbed sissy baby robin, pulling him close and zoomed out of the window, Robin blushing and trying to hide his face in her breasts as the room collapsed.
“Thankfully, this is a deserted area of the city.” Starfire said, landing with robin on a nearby rooftop.
“Uh..Yeah..” Robin said, feeling foolish in his diapers and tutu. “Wish we would of had time to get my clothes back though..’
Starfire looked at him, and laughed and then wrapped a arm around his neck.
“Oh don’t worry, I happen to think this is a cute look for you.” she chuckled, a slight spark in her eyes as she drew him into a deep kiss.
“Now, let’s get you home and out of those soggy diapers hmm?’ she purred.

Call me crazy, but I feel the author perhaps doesn’t like Robin. It’s all in the tone, but since I have an English degree, I’m able to pick up on these minute details?don’t worry if you can’t.

Back at the tower, robin couldn’t wait to get changed, but Starfire stopped him, taking him right to her room.
“Starfire, what are you doing?” Robin asked, blushing as he did a semi potty dance, having to pee and the plug was still in his butt.
without thinking about it, his asshole was pulling it in and out as much as it could. he was in a state where his mind was trying to understand what was happening to him.
“Robin..you are still in need of my care after what you have gone though.” she said gently, and patted his rear.
…
“I knew you liked this.” She teased. “only a compete sissy fag would cum in his diapers, which you have over, and over again, or did you hope I could not tell?”
…
“Awww, don’t cry..” she pulled him in tight for a hug, and with a soft sob, he found himself soaking his diaper.
“did the little girl go uh-oh” Starfire whispered, kissing and licking his neck.
“I..I…Noo!” he squeaked.
“Don’t lie to mommy..” she whispered…
…
his sissy crys were useless, and soon, with her rubing his sissy rear, he came again

I’m sorry to edit so much out, but it’s absolutely for the best. I promise you.

“now Rachel..” she said, having chosen it as his new name since Robin didn’t feel girly enough.
“Rachel, i think we need to talk..” She said as she slipped a glove on one of her hands.
he stared at the hand and whined softly, sucking harder as she proceeded to drip her index and middle finger in lube.
“Clearly, you are in no shape to be leading the titans at the moment.” she went on and then using only one arm to show off the difference in power rolled him onto his belly.
Robin did not like where this was going, and started to try and crawl away before her un-gloved hand smacked his ass HARD.
the paci flew from his mouth, and tears leaked out of his mask as she found it was more humiliating to leave it on the sissy fag.
“Ah…ah…” He gasped, trying hard not to sob.
“don’t cry…don’t cry…you’re not a little sissy!” He thought fiercely, and then Starfire swatted again.
“Bad bad BAD girl!”
he tried, he really tried but started to wail and cry, as Starfire laughed at him.
…
“Admit it Rachel, you’re a pathic sissy loser!” She said and then held his chin in her powerful hand, and made him look up at her.
“I..I..” he sobbed, tears steaming down his cheeks as he softly blubbered.
“you what?’ she asked, smiling.
“I’m Sorry.” he said in a small voice.
“I’m sorry What?” She asked, grinning from ear to ear.
“I..I’m sorry Mommy..”
Starfire roared with laughter and then patted the sissy on the head.
“Good girl Rachel.”

And there the story ends, and one can only hope Starfire and Rachel’s adventures continue. I swear to god, don’t read the full story?I know I say that every week, but for fuck’s sake, DO NOT DO IT?because the Raven and Beast Boy stories are even worse.