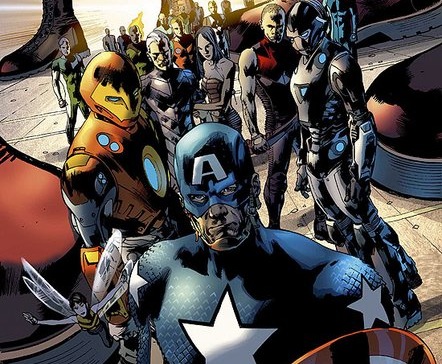 Confession time: the only superhero comics I have actually bought in the last five years are Mark Millar’s two Ultimates series. I think they’re swell, and when he left, so did I. Comic Book Resources has some good news for me, at least, by reporting that Millar is returning to the Ultimate Marvel universe with a new Avengers-centric plan that sounds mighty swell as well. Millar will be writing a new series called Ultimate Avengers (now that the Ultimates have separated from Nick Fury and SHIELD), which will be monthly, but really be two 6-issue series a year, each focusing on one massive super-brawl.

Millar revealed the first act of “Ultimate Avengers” features all of the Ultimates, all of the Fantastic Four and some of the Ultimate X-Men. “And there’s a small appearance by Ultimate Spider-Man,” Millar revealed. “The first [arc]is a huge one. It’s got everybody. And Kang is the villain. And Red Skull is in there, as well. It’s great getting to apply the same hand as I did in putting the Ultimates together.
…
The second “Ultimate Avengers” storyline delves into material from the first volume of “The Ultimates,” in which Hawkeye and Black Widow were seen working for a black ops team called Ultimates Black. “We’ve got Nick Fury assembling a dirty tricks team really and we see there is a dark side to Ultimate universe,” Millar explained. “You’ve got a team comprised of The Punisher, War Machine and an African-American Hulk character that I have created. And it’s also tied into the origin of Hawkeye. We have seen the origin of Thor and Captain America and so on in ‘The Ultimates’ but we never really saw where Hawkeye came from. It’s quite a shocking setup I’ve been building up to through the first two books of ‘The Utimates.'”

Those are the two most revealing paragraphs from the lengthy article over at CBR, which is worth reading if you want more general Millar info, although Millar does also say the second Ultimate avengers will also feature Ultimate Ghost Rider, Blade and Punisher. It’s also worth noting that Ultimate Hawkeye was a stone-cold motherfucking killer and totally awesome, so I’m pretty tingly to get to learn more about him.

I know some folks have their issues with Millar and his writing (or at least his personality), but I have to admit I absolutely love his original Ultimates comics. Looks like I’ll have a few more comics to buy this decade after all.