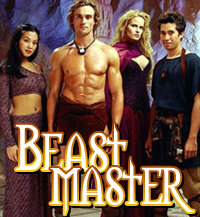 Syndicated TV is generally thought of as the minor leagues of entertainment. Even the big players?shows like Hercules: The Legendary Journeys or Xena: Warrior Princess?might be huge compared to other players in the league, but when put against the majors of network TV, they’re usual okay at best, and downright pitiful at worst. Thanks in no small part of Herc and Xena‘s middling success, low-budget and low-creativity TV producers flooded basic cable with hour-long adventure shows back in the ’90s, although the format certainly existed before then. Here are the 10 syndicated adventure show so bad you’d do better to watch that home haircut system infomercial on the other channel.

In 19th century Mexico, when you need someone to rob corrupt military rulers and give money to poor peasants, who do you call? Zorro. When you want a strong, sword-fighting woman who routinely kicks men’s asses? You call Xena. When you want to rip off both characters and premises, and refuse to add an iota of an original thought to it? You create Queen of Swords, about severely hot noblewoman Tessa Alvarado who puts on a mask at night to be a woman-y Zorro. Also, you name her Zorxena, because you fucking couldn’t care less. The 2000-2001 show probably should have been a hit, mostly because of its beautiful star Tessie Santiago, if not for its ludicrously terrible theme song “Behind the Mask.” However, Zorro Productions sued the show and its creators for simply adding boobs to Zorro, and the Queen of Swords strangely went off the air.

A half-hour syndicated series that married Robocop with StreetHawk, Superforce told the story of Zachary Stone, an astronaut recruited to wear an experimental combat suit to fight crime in the futuristic city of Megaplex in far-off 2020. The suit not only gave him super-strength, but had an Inspector Gadget-style arsenal of doohickeys, and an accompanying motorcycle, which was an equal partner with him as part of the “Superforce.” Stone was also assisted by an artificial intelligence (voiced by Patrick MacNee, who was wise enough to digitialize his face) named Hungerford.The show ran for 48 episodes between 1990 and 1992, and for no good reason, also gave Stone psychic powers in the second season, because the super-suit and motorcycle just wasn’t cutting it. Oh, and Watergate co-conspirator G. Gordon Liddy was a recurring villain.

Framed for a murder he didn?t commit, Lorenzo Lamas prowls the badlands, helping folks along the way, all the while looking fabulous and refusing to wear a shirt. Of course, he’s also hunting the one man who can clear his name, as all people framed for a crime they didn’t commit are legally required to. During its five long seasons from 1992-97, Renegade developed a cult following mostly comprising of stoned teenagers and people whose ball games got rained out. Notably, Lamas had his then-wife Kathleen Kinmont cast as his romantic lead Cheyenne Phillips, but they divorced after season 4 and the character of Cheyenne disappeared. Go figure.

When Hercules: The Legendary Journeys was at its peak, every TV producer in Hollywood had body builders put on loincloths. Conan the TV series pretty much copied the Hercules formula verbatim, transforming the self-centered, hyper-aggressive barbarian into a noble adventurer for 22 extremely low budget adventures. Playing Conan was German bodybuilder Ralf Moeller, who kind of felt like the mall-Santa equivalent of Arnold Schwarzenegger, which completely suited the tone of this series.

Before he was committing hate crimes in the name of Snickers, Mr. T was T.S. Turner, a street-smart ex-con who just happened to be framed for a crime he didn’t commit. He wore a nice suit by day, but at night he donned a leather outfit to engage in vigilante justice throughout Toronto, which the TV producers pretended to be any place but. The second “T” was for Amy Taler, a young attorney who helped Turner in various unclear ways, but was disposable enough to be replaced by a “sister” in season 3. The violent first season was first run syndicated, the later seasons were toned down and sold to the Family Channel.

A campy, awful series that was really just a showcase for Pamela Anderson?s pneaumatic physique (which was arguably a testament to the popularity of Baywatch)
V.I.P. didn?t strain to be clever or original, it just delivered the maximum basic-cable allowed T and/or A for folks who were too prurient to pay for Cinemax. Technically, Pam was Vallery Irons, who worked as the stupidest bodyguard in California, but who always managed to save the day, unlike her far more talented but ultimately useless co-bodyguards. There was actually a V.I.P. videogame made in 2002, which surely made Jesus cry.

The 1982 Beastmaster movie was a must-rent VHS movie back in the ’80s. This wasn’t exactly a fantastic pedigree, but someone still decided to make an hour-long TV show on the franchise in 1999. In some nondescript fantasy world, Dar has been framed for a crime he didn’t commit. No! Wait! My bad. Dar is the last member of a tribe who can talk to animals, a power he uses almost exclusively to look for his lost gal-pal Kyra. He’s also supposed to find his family, who were ironically turned into animals, to defeat the evil Bacifer, although no one ever explains how or why. The Beastmaster was just another Herc clone, without the camp that made the movie so fun. The series does get some props for bringing back original Beastmaster Marc Singer for a few episodes.

Hard to imagine, but this spin-off of the original Baywatch series had the Hoff moonlighting as a hard-boiled detective who solved crimes and mysteries, literally at night from his day job of being a lifeguard. More insanely, after no one watched the first season, the producers decided to turn the show into aBaywatch version of The X-Files, as Hasselhoff chased ghosts and spooks. The results are impossible to look away from, sort of like the cast of Archie comics doing a version of Alan Moore?s From Hell. After two more seasons of limping in the ratings, Baywatch Nights was mercifully canceled.

2) The Adventures of Sinbad

No, it?s not the exploits of the American funnyman, although that actually might have helped. This Sinbad was a Canadian production hoping to cash in on some of those sweet Hercules ratings. The Canadian dollar didn?t buy much in the way of special effects or production values, not to mention stars, as lead Zen Gesner is the whitest actor to ever play an Arab (he makes the Harryhausen Sinbads look downright ethnic). A second season saw the induction of Canadian equilivant Xena in the form of Bryn, a female warrior, but Sinbad mercifully drowned after the second season.

A team of terrorist-fighting super spies and agents masquerade as fashion models who frolic in bikinis in their spare time. On paper, this sounds like it could be television?s big thing (at least in 1993) but something was lost in the execution. The guys and gals of H.E.A.T. couldn?t hold a candle to Baywatch in the sexy department, and the show had about as much intrigue and action as an episode of Mr. Belvedere. Also, the 1993 show starred?and again, we’re not shitting you here?Fabio, who displayed all the acting skills he’d later bring to his critically acclaimed I Can’t Believe It’s Not Butter commercial. Incidentally, H.E.A.T. stood for Hemisphere Emergency Action Team.