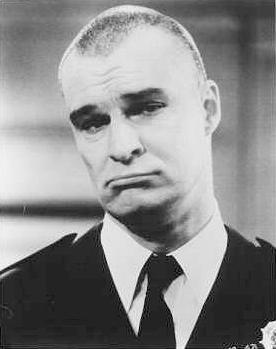 Oh, where to begin.

Okay. Let’s start simple: this is a story by Scribe. It is 10 chapters long, but does not appear to be finished. Scribe has excellent grammar and punctuation, which is in his or her favor.

Now, if you remember the show Night Court, you possibly recall the many episodes where a crazy person would come into the court, claiming to be Santa Claus or an alien, they would be wacky, the Night Court cast would try to talk them out of their delusion for 22 minutes, and the episode would end with some mysterious that they in fact were Santa Claus or an alien or whatever. It was a standard plot. Well, Scribe remember this as well (among many, many other Night Court facts), as his ongoing epic stars Rankin, a crazy person who claims to be an alien.

Bull continued over to join Rankin. Harry watched them go, frowning. “Is it just me, or does Bull seem, um, close to Rankin?” He watched as Bull popped a Nutella loaded pink marshmallow in Rankin’s mouth. Then he used his thumb to wipe a smear of chocolate off the other man’s mouth, and licked the chocolate off his thumb, while making eye contact with the smiling blond. “Very close. Perhaps too close for a friend?”

Buddy considered this as he ate a french fry. “You know, Harry, you’re right. They are too close for friends.” He ate another french fry. “But I’d say they’re just right for lovers.” Dan, Christine, Mac, Roz, and Harry had all been taking a sip of coffee. Dan, Harry, and Christine all sprayed coffee. “I warned you that pot looked old.”

There is no graphic sex described in “Daddy Material,” which is good, as this story has nearly broken me as is. Judge Harry and the others accept Bull’s new lifestyle and lover with aplomb (except for that wacky Dan!) and life continues in Night Court. Until!

Christine returned to the table, taking a seat. “What did I miss?”

“Pregnant!” Rankin crowed. “Preggers. Knocked up. In the pudding club. Got a bun in the oven.” Rankin’s voice was rising excitedly. “Up the duff. Gravid with child.” He threw his arms wide. “He’s a bearer of LIFE!” He turned glittering eyes on Bull and crooned, “Acres and acres of him, and he’s aaaaall mine.”

Now, this announcement happens in Chapter 5. The remaining five chapters have to do with Harry and the others trying to convince Bull that he’s not pregnant, can’t possibly be pregnant, until in Chapter 9, when start showing, has a sonogram and it’s revealed he certainly has something in there. Harry and the others remain unconvinced, but I feel confident that Bull really is having a baby. Why?

Because this story is more than 17,000 fucking words long. Why would scribe spend all this time and not have Bull pregnant by an alien?

It is clearly time for me to start drinking heavily. If the days remaining posts are just profanity or gibberish, please forgive me. After all, I had to read the whole thing.