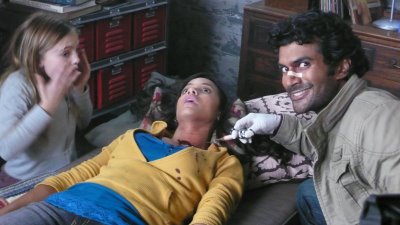 Lest you forget, Topless Robot‘s increasingly mean Heroes live-blog will start promptly at 9 p.m. EST. Sorry for you folks who see Heroes later, but now it just mean we know what preposterously stupid plot points occur and what bizarre, utterly inappropriate ways the characters are acting despite their previous two seasons of meager development a few hours before you do (or weeks, for our Topless Friends in foreign lands).

I was willing to forgive some nonsense when the show premiered two weeks ago, since it had a plethora of twists (some good, some bad), but last episode seemed very much like they were making it up as they went along. Heroes has already squandered my goodwill, and I already regret agreeing to live-blog the entire season. Don’t let me suffer alone! Pull up a fifth of vodka, and stop by!