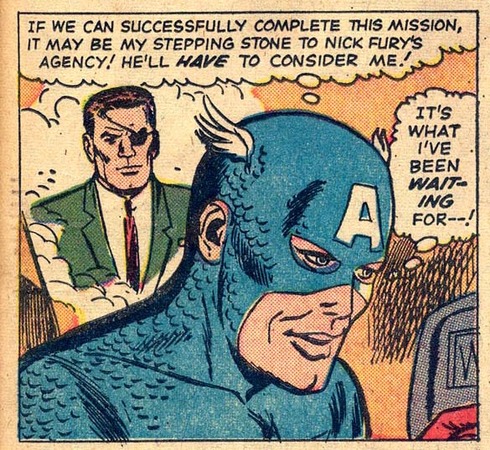 Stan Lee?s genius as a creator is self-evident. His characters make billions of dollars for Marvel Comics, his stories are still in print in Marvel?s Essential line, and his work pretty much created the modern superhero comic as we know it. And yet, and yet? look, let?s face it: Stan Lee wasn?t a good writer in any conventional sense of the term. In fact, he was frequently a batshit insane writer, and he ended up writing some incredibly stupid things. Comics fans have, for the most part, chosen to collectively forget Stan?s dumber moments, but that?s no reason for the rest of us assholes to let him slide.

Presented here, for your amusement and probably disapproval, are the ten dumbest things Stan Lee ever wrote in his run on the Avengers. His run includes the first 34 issues of the book, which pretty much set up every single basic type of Avengers plot that later writers would proceed to run into the ground. There are some good stories in this run, but also a lot of stupid fight scenes, dead-end plot threads, and jaw-droppingly inane banter. Here?s the worst of the worst? and just think, Stan pulled all this off in the course of a single-run.

The Set-Up: The Enchantress comes back to menace an Avengers line-up consisting of Captain America, Quicksilver, Hawkeye, and Scarlet Witch with a villain named Power Man. His gimmick is that he has all the powers of Wonder Man, an earlier villain who kicked the collective asses of the previous line-up that included Thor, Iron Man, and Giant-Man. This leaves the line-up where the heavy hitters are Guy With Bow and Guy Who Runs Fast pretty boned, right?

What actually goes down is that the Enchantress inexplicably decides to use Power Man to frame the Avengers, leading to the team being declared a public menace and asked to leave New York. Since, hey, if Power Man actually just fought them, the story would be about twelve pages long and extremely depressing. Anyway, this meanders through a lot of padding to the inevitable manhunt for the Avengers, complete with a montage-esque scene of lurid headlines and reactions from the man on the street? and this: 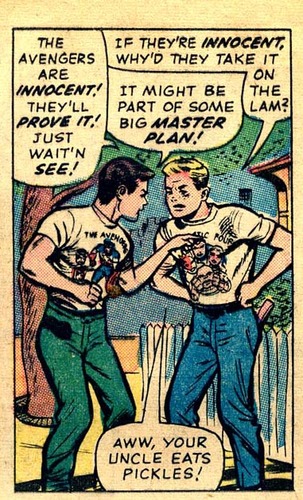 I can only hope this was Stan?s Code-approved alternative to having the kid say ?Your uncle sucks cocks!? The alternatives are too stupid to contemplate.

The Set-Up: All you really need to know here is that issue #34 is the debut of the Living Laser, a villain based entirely on Stan Lee not understanding what lasers are. The Living Laser is actually Arthur Parks, a research scientist who became a criminal to impress Lucy Barton, an ex-lover who jilted him in favor of a guy who didn?t have an insane obsession with lasers. 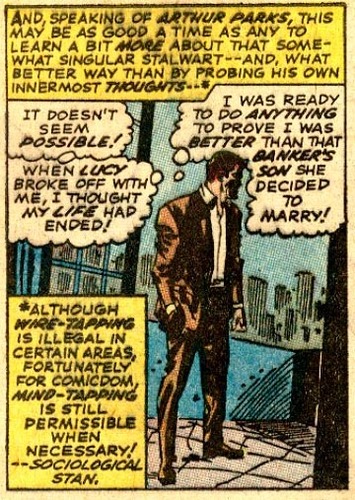 There are a lot of ways of interpreting this panel that are just full-on fucking terrifying, because it really seems to express Stan?s inner, 1984-ish desire to revel in god-like power he wields over his creations. Let?s not attribute weird fictional malice where old-fashioned stupidity will do, though. Yes, Stan, it?s kinda crazy how you have the ability to completely expose any character?s motivations by careful thought balloon placement. It might even be one of the most off-putting things about writing stories from third-person omniscient view! Maybe you shouldn?t be fucking pointing that out to us.

The Set-Up: In Avengers #16, Thor and Iron-Man disappeared into solo plotlines while Giant-Man and the Wasp decided they?d had their fill of punching guys for awhile. So you had the famous and then-controversial roster change, where Hawkeye, Quicksilver, and the Scarlet Witch replaced them with Cap hanging around to lead. Quicksilver?s tenure as an Avenger in the Stan Lee-written issues was pretty miserable, because? well, this is as close as he ever came to having a personality. 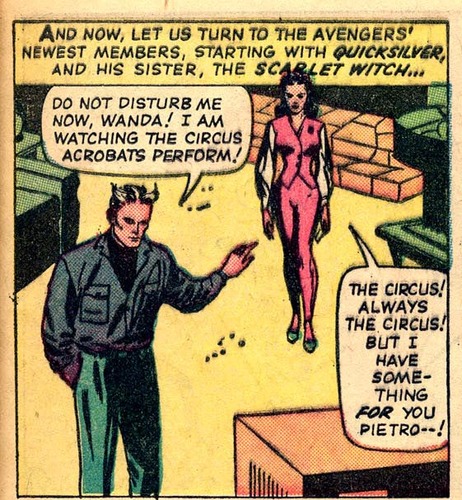 That?s right: Quicksilver?s only two character traits were being an asshole, and really liking him some circus acrobats. And Hawkeye was also an asshole, so that first one didn?t really count. Why circus acrobats, for fuck?s sake? Just so the one time Quicksilver does try to join a circus, it ends up being the fucking Circus of Crime?

The Set-Up: As you can see, this is one of the few really ill-advised Avengers plot threads that managed to run through several issues, and just about every time it was mentioned it resulted in Captain America doing something that was stupid and creepy in a way that went way above and beyond the homosocial call of duty.

It makes sense on the face of it: Captain America is bummed out about not having a job now that he?s unfrozen in the 1960s, so he writes to Nick Fury in hopes of getting a job at S.H.I.E.L.D. The problem from there is that Cap is depicted as wanting that job at S.H.I.E.L.D. the way a fourteen-year-old girl desperately wants to get a phone call from that cute boy in math class.

I mean, just look at Cap when he does get a reply to his letter. It?s as if Dazzling Don Heck here somehow went forward in time and found a way to Photoshop Miley Cyrus?s head onto him. 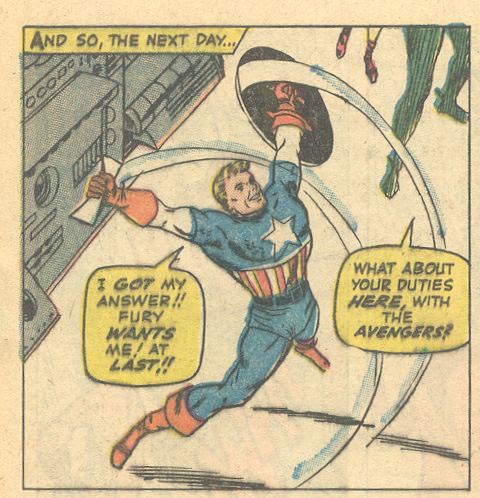 If you?re wondering what ultimately came of this plotline, well? absolutely nothing. The response Cap gets above is actually sent by the Swordsman, a bad guy who wanted to hold Cap hostage in order to force the other Avengers to vote him in as a member. (Yeah, look, I don?t know.) A few issues after that Cap has to go to S.H.I.E.L.D. to get some information on the coded white supremacist group The Sons of the Serpent, and then acts like meeting Nick Fury ain?t no thang. Maybe Cap was just trying to keep Nick from breaking his heart again.

The Set-Up: The plot of the first Avengers issue called for Loki to make the Hulk look like a public menace by using some trickery to make it appear like he was going on a destructive rampage that could kill countless civilians. In fact, the Hulk was on a destructive rampage that, as usual, was somehow incapable of hurting anyone. Once the Hulk?s dopey sidekick Rick Jones hears about this, he decides someone needs to get some other superheroes on the case? with the power of ham radio! 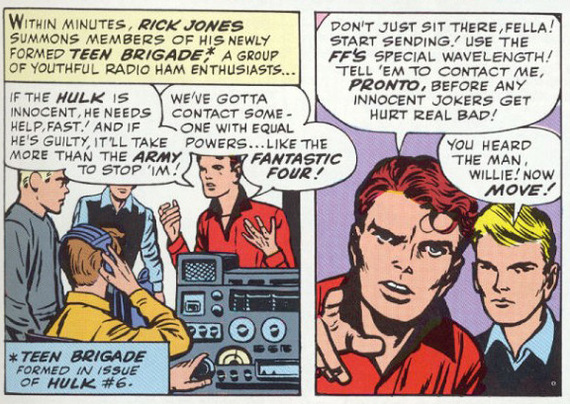 Yes, Rick Jones really did have a nationwide network of teenagers with attitude and radio transmitters who were, apparently, able to instantly contact everyone from the government to the goddamn Fantastic Four in the name of the Hulk. Such is the power of ham radio! Their modern equivalent would be Rick Jones?s livejournal list, I guess, with the power to send IMs to the superheroes and government agencies of their choice via their fucking iPhones.

The Set-Up: Captain America got unfrozen in issue #4, so it was pretty much required that one of the Nazi bad guys he fought would turn up shortly after. Even better, it?s Baron Zemo, the guy responsible for the infamous death of Cap?s golden age sidekick Bucky. This lets Cap get some revenge on in addition to the Avengers getting a much-needed master villain to fight.

Of course, the kids reading comics in the ’60s wouldn?t know who Baron Zemo was, so you?d need to make it pretty clear that he was an evil guy. 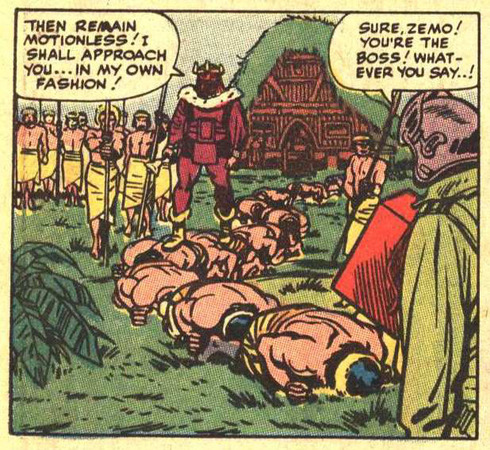 See? Baron Zemo is so motherfucking evil that he even has to walks like an asshole. This is obviously the most evil nasty un-nice dude you could ever conceive of. In a modern comic, we?d also see him drinking blood wine from a goblet carved from a baby?s skull. (You know Stan probably thought of that, but knew he couldn?t get it past Code.)

The Set-Up: This isn?t so much an Avengers thing as an ?early Iron Man? thing, but? Jesus. Just look at it. 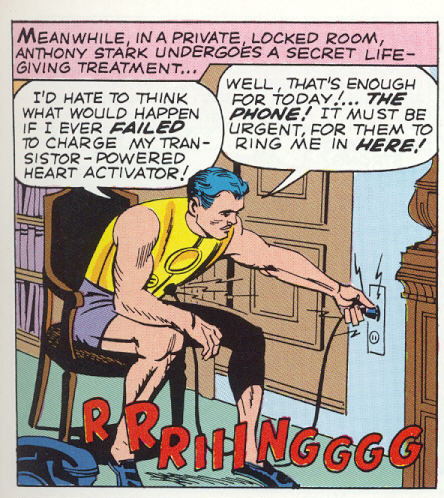 Early on, Tony Stark had to occasionally plug himself into a fucking wall outlet to keep the Iron Man armor powered up and his heart beating. And this is in the early ’60s, too, so it?s not even a goddamn three-prong plug. How long did he have to suck juice out of a socket to fly cross-country in that thing? Do you know how depressing it is to realize Iron Man probably had less battery life than the Game Gear?

The Set-Up: Pretty much since the book?s launch, all the Avengers really did was fight the Hulk. This issue teamed the Hulk up with the highly anti-social Namor the Sub-Mariner for what amounted to an issue?s worth of brawling. It wasn?t really a fight the Avengers could win cleanly, but the issue had to end somehow? and this is apparently the best Stan could come up with.

Yes, you just read the Hulk becoming so angry that he turned back into Bruce Banner. It?s so flagrantly something Stan pulled out of his ass to end the issue quickly that it?s almost kind of endearing. Stupid as shit, sure, but an endearing stupid. Stan is practically daring you to have the balls to write in and complain about something so fucking obvious.

The Set-Up: This issue was a running battle with Baron Zemo, the Enchantress, and the Executioner. The Enchantress was the dominant evil force in the trio, using magic spells to briefly make Thor decide he needed to go beat the hell out of the other Avengers. Toward the end of the issue Thor was freed of the enchantment and the villains pretty soundly beaten? but Stan didn?t seem happy with just letting them get away in Zemo?s jet. The heroes needed something that felt more like a decisive victory, but still left the villains available for future use. Something like? this?

What the hell? Thor swings his hammer so fast that he opens a hole in the universe? A fucking randomized hole? It isn?t all that unusual for comic book writers to make up new powers for a hero when the issue desperately has to end, but Marvel usually put some effort into making the ?new? ability feel like an extension of something the hero could already do. Yes, we know Thor can swing his hammer really hard, but Thor swinging his hammer interdimensionally hard is the sort of bug-fuck insanity you don?t expect to see outside of really shitty anime.

The Set-Up: In many ways, the first issue of the Avengers was by far the worst. Beyond Loki?s involvement as mentioned above, basically nothing happens in the issue besides a big ridiculous brawl with the Hulk, and a bit where Thor wanders off to fight Loki in one of the more psychedelic parts of Asgard. Now, just how ridiculous did that big fight with the Hulk get? 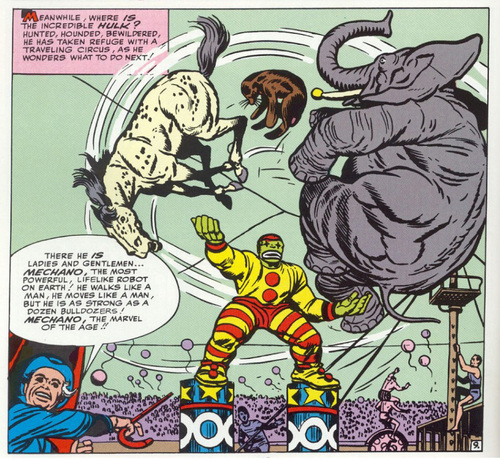