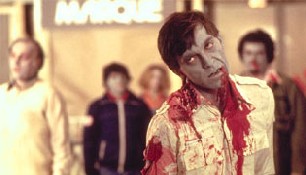 Zombie movies are almost certainly the pinnacle of Western civilization. Think about it: Where else can you find a medium that combines such potent social commentary with a near-mandatory disembowelment scene policy? And that?s not even getting into the potential for comedy which may of the best zombie movies display. You don?t have to take my word for it. If there was any doubt that zombie movies were such an important element of our culture, would we have so damn many of them? Looking at that list, it?s obvious that the genre can be intimidating? few will deny that 90 percent of zombie movies are nearly unwatchable. In that spirit, here?s a list of the top ten indispensable zombie movies, ten can?t-miss gems that represent the breadth and depth of the genre and serve as a vital introduction to the best Western culture has to offer.

As strange as it seems, not everyone loves zombie movies. If you?re not too sure about the genre, or need a zombie movie to get your horror-hating girlfriend on board, Shaun of the Dead is just what the (mad) doctor ordered. Simultaneously working as a straight zombie movie and as a sweet romantic comedy, it focuses on a lovable underachiever who wants to prove himself to the woman who just dumped him. Luckily for us, he?s doing so in the face of a full-fledged zombie apocalypse. You can?t help but root for Shaun as he tries to save his mum, girlfriend and best buddy from becoming zombie chow, even as he proves himself to be a complete and utter dumbass at every turn. It?s especially notable for the way it manages to work in the most absurd situations?such as the scene shown here, where a zombie receives a beatdown to a Queen tune?without ever resorting to parody or cheap laughs.

It?s been called a zombie movie without zombies, but that?s just purists being retarded. The zombies here may not be technically dead, but they sure act like zombies: chasing people, biting them and turning them into zombies. And it sure looks like a zombie movie, with its apocalyptic vision of London, its band of survivors desperate to escape and, in a significant nod to Romero?s Day of the Dead, an insane military that?s actually far more threatening than the zombies themselves. Love it or hate it, it?s impossible to ignore its influence: Since it came out, fast zombies have become all the rage?see Zack Snyder?s Dawn of the Dead remake and any number of less-famous, direct-to-video entries. Plus you can con your film geek friends into watching it since it was directed by Danny Boyle of Trainspotting fame.

8) Return of the Living Dead

This movie got its start as an alternate sequel to the original Night of the Living Dead by Romero?s partner John Russo, but by the time it finally came out it had become something much different ? and much, much cooler. In the hands of Alien scribe Dan O?Bannon, zombies became not just smarter, faster and harder to kill, but also a lot funnier. Playing the genre for laughs, O?Bannon throws two bumbling medical supply warehouse workers, their asshole boss, a canister full of zombie and zombie-creating gas, a Nazi mortician and a group of punk rockers into the mix, sets the whole thing next to a cemetery full of waiting-to-be-awakened zombies and lets things evolve from there. It was this movie that gave the undead their reputation for eating brains specifically (instead of all flesh), and it helped launch the soon-to-be popular splatstick genre. If that?s not enough, it also features a hot, full-frontal nude scene from the legendary Linnea Quigley. And it’s that’s still not enough, it has two of the best lines ever spoken by zombies: “Send more cops” (into a police radio), and “I love you…that’s why you’ve got to let me eat your brains!”

7) The Serpent and the Rainbow

The Serpent and the Rainbow has a distinctly different view of zombies than the rest of the films on this list. Based on a nonfiction book by anthropologist Wade Davis, it presents a relatively realistic view of the zombie phenomena in Haiti, where the myth originates. As the main character?a drug-swilling anthropologist seemingly ready to swallow anything a witch doctor hands him?searches for the drug used to create zombies, he?s drawn into the Haitian underworld of corruption and voodoo, where he?s tortured by having his testicles nailed to a chair, gets buried alive and becomes a zombie himself. Atmospherically creepy and unsettling, it shows that even ?real? zombies are plenty fucking scary.

Asia has contributed several solid entries to the genre, and atop them all sits Junk. The story sets up a three-way battle royale between a gang of amateur thieves, their double-crossing Yakuza overlords and a brood of zombies controlled by a super-strong queen zombie hottie. If that sounds insane, it is, in a great way. Also great are the new ideas it brings to the genre (zombies as collective intelligence controlled by a ?queen?) and some interesting subversions of gender roles (the two strongest characters are both women).

5) The Dead Next Door

The zombie genre has long been a favorite of backyard auteurs shooting cheap, shoddy camcorder ?epics? between shifts at the Burger King. Not surprisingly, most of these are utter shit. None manage to overcome these limitations quite so well as The Dead Next Door, a movie about a squad of elite government zombie fighters that is pure, schlocky grade-Z genius. The acting is atrocious, the writing is, at best, passable, the effects are laughably cheap and it features an unreal number of spectacularly bad mullets, but somehow the total result is epic in scope and thoroughly entertaining.

For sheer perversity and twisted, black humor, it?s hard to beat Re-Animator. Loosely based on an H.P. Lovecraft story, Re-Animator tells the tale of Herbert West, a brilliant if deranged medical student with a passion for defeating death. His roommate?s cat, random bodies from the morgue, a pesky school administrator and a teacher who try to steal his reanimating serum all become his unwitting test subjects. Most of them are ?put down? shortly thereafter in a series of gruesome and hilarious scenes. The true, perverse genius of the film comes out in its final third, in scenes such as the one where his reanimated teacher, holds his own severed head up so he can, uh, give head to a pretty coed he?s captured. They don?t make movies much more fucked up than this.

There are three reasons Dead Alive (a.k.a. Braindead) is a must-see zombie movie. First, it?s damn funny?where else can you see a creepy, big-headed zombie baby romping around a park or a kung-fu priest who ?kicks ass for the Lord?? Second, it was directed by Peter Jackson before he went on to megafame and fortune for directing those weird, homo-erotic hobbit movies. And finally because it is almost universally recognized as the goriest film ever made?like hundreds of gallons of fake blood and a mass slaughter via lawnmower gory. For sheer volume of gore?albeit over-the-top, cartoonish gore?this movie cannot be beat.

George Romero made five zombie movies, including Night of the Living Dead, the film that essentially invented the modern genre in 1968. All five are worth seeing, but none of them is better than 1978?s Dawn of the Dead. Set in a shopping mall, when shopping malls were kind of a new thing, and featuring a near-perfect mix of gore, character development and kick-ass zombie battles, Dawn is the ne plus ultra of zombie cinema. From its opening scene of a SWAT team tackling a zombie-infested apartment building through to its unsettlingly ambiguous ending, Dawn offers everything you could ever want from a zombie movie?including a pie fight between a biker gang and a mall full of undead. You can?t claim to be a zombie fan without seeing this movie unless you want knowledgeable people to laugh in your face.

Romero?s Dawn of the Dead was so popular in Europe that it spawned a legion of imitators, most notably among the Italians. Deceptively marketed as a sequel to Dawn, which was called Zombi in Europe, Lucio Fulci?s Zombie (a.k.a. Zombi 2 and Zombie Flesh Eaters) is by far the best?tightly paced, consistently entertaining and surprisingly obscure considering how good it actually is. The film still stands today as one of the most gruesome movies ever made?watch for the gut-wrenchingly realistic eye impalement on a splinter of wood. Not enough for you? Its most famous scene, shown here, has a zombie fighting a shark. What else do you need?