Menu
Home
>
Daily Lists
>
The 10 Most Baffling and Horrible Pieces of E.T. Merchandise (Other than the Atari Game)

E.T.: The Extra-Terrestrial taught us many things: aliens are friendly, being divorced can suck, drunk kids/aliens are funny and Dungeons & Dragons seems kind of pathetic once you actually watch people playing it. Such life lessons made E.T. the biggest film of the 1980s, cementing Steven Spielberg?s reputation as a master storyteller and spawning tons of merchandise along the way. From crappy plush toys to pins featuring crudely drawn illustrations of Drew Barrymore smooching E.T., stuff from the film?both officially licensed and completely unauthorized?was everywhere. It?s pretty well known that the Atari game based on the movie was so awful that unsold copies of it were buried in a New Mexico landfill, but that sad footnote in videogame history was hardly the only piece of junk released in conjunction with the flick. Here?s a look at 10 more nonsensical products inspired by that magical alien who won us all over by turning on his heartlight. Let?s take a ride across the moon, shall we?

Michael Jackson was the man-child of the Reagan era, so of course he?d want to cash in on how the film made everyone else feel like they were a kid again too. Produced by Quincy Jones, Michael Jackson?s E.T. Storybook record featured the Moonwalker narrating an abridged version of the film?s events and singing the new song ?Someone in the Dark.? Legal difficulties led to the album being pulled following its release, but the track (which somehow won a Grammy) resurfaced on last year?s Thriller reissue. Although the song?s lyric ?when someone in the dark reaches out for you? was originally meant to be comforting, it now seems incredibly creepy, given MJ?s legal problems over the years. 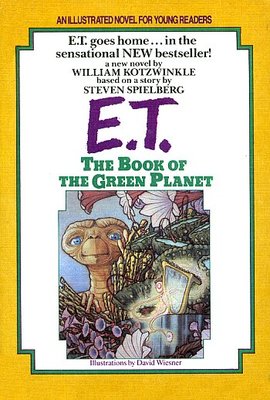 Veteran sci-fi author William Kotzwinkle (The Fan Man) did such a great job with the novelization of E.T. that Spielberg tapped him to write this follow-up. Instead of heart-warming magic, what readers got was a lame adventure in which E.T. teamed up with his friends (irritatingly named Micron, Electrum, Occulta and Sinistro) to return to Earth from his Orwellian home planet. The problem with this is that the film?s conclusion wrapped things up perfectly. There was simply no more story to tell. Making matters worse, E.T.?s bad attitude towards Elliot growing up and discovering girls makes him seem like a jilted lover and an intergalactic cockblocker. 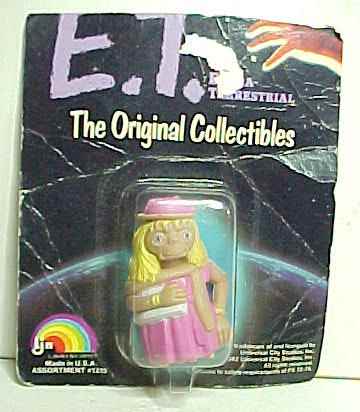 Toy and videogaming nerds know LJN as the company who made awful Nintendo games based on movies (Friday the 13th, Back to the Future, Jaws) and bungled the original Indiana Jones and the Temple of Doom action figure line. This PVC figurine of a cross-dressing E.T. is just another indicator that there was some serious incompetence and/or peyote abuse happening at LJN?s headquarters. 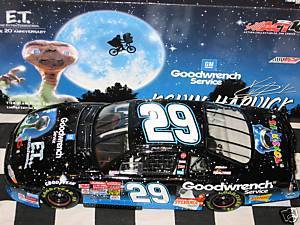 Without a doubt, the best scene in E.T. is when Dee Wallace?s jilted single mother character Mary steals her neighbor?s Indy 500-qualifying car to head down to Mexico with plans on mowing down her ex-husband and his new bit of strange. Oh wait, that never happened. So why is there a NASCAR tie-in to the film?s 2002 re-release? Synergy, baby! Non-sensical, disgusting, hateful synergy. 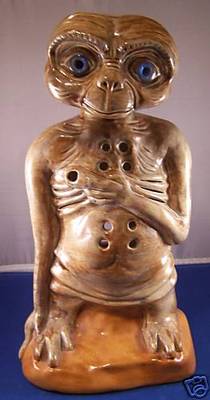 If you attended any carnivals, swap meets or flea markets throughout the 1980s, chances are that you own some example of bootleg E.T. merchandise. Among the worst of these legally dubious tributes to the movie?s greatness is this ceramic version of E.T. that has an opening that you can put a candle in to replicate the glow of his benevolent alien heart. Or I suppose you could also use it as a bong. Either way, he?s still giving you, and good taste, the finger. 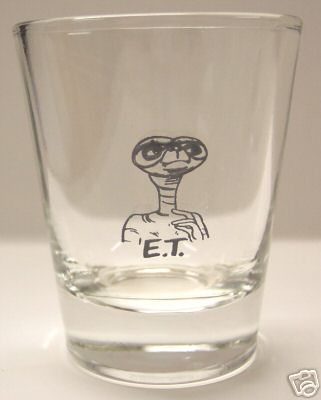 For all of Spielberg?s tinkering with E.T. to replace the guns with walkie talkies, he never addressed the fact that the movie inspires underage drinking. The truth is that when E.T. began chugging back cans of Coors, an entire generation of kids suddenly developed an interest in alcohol, including child star Drew Barrymore. If the film helped kickstart your lifelong love of delicious liver-killing beverages, why not pick yourself up an E.T. shot glass? Admittedly, it does serve one useful purpose?if the extra-terrestrial on the side of the glass ever starts looking attractive to you, you know it’s time to call it a night.

I guess parents these days don?t give a shit if their kids take vitamins or not, because you hardly ever see commercials for them on TV anymore. Not to sound more like a sad, nostalgic old man than I already do, but back in 1980s there were an endless array of vitamins based on popular characters. Unfortunately, the E.T. brand?complete with an admittedly nifty figure attached to each bottle?had a medicinal taste akin to those atrocious Pac-Man vitamins. I don?t care if these had 30% less sugar, they were gag inducing. If vitamins don?t have the stomach-pumpingly yummy taste of the Flintstones ones, I?m not interested. 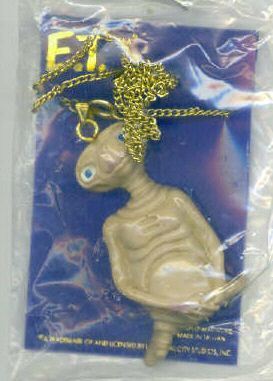 From a business point of view, E.T. jewelry was a brilliant idea. Girls and Cathy-reading secretaries especially loved his alien antics, so obviously they?d want charm bracelets and necklaces emblazoned with his image. Of course, these trinkets were so cheaply made that many a dermatology practice was founded on cases of contact dermatitis that stemmed from wearing them. 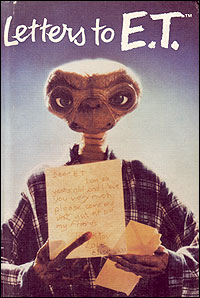 From Santa Claus to Jesus, the slow love writing letters to fictional characters. Thus, Letters to E.T. was born. Featuring actual messages that kids and various morons wrote to Steven Spielberg and a non-existent movie prop designed by Carlo Rambaldi, the book is crammed with life-affirming nonsense and vaguely religious sentiment. Don?t get me wrong, I?m all for penning missives to Spielberg. (In fact, I?m currently working on a communique to him requesting an explanation of Indiana Jones and the Crystal Skull?s third act.). But writing to E.T. himself is, with all apologies to Maureen McCormick, retarded.

I?m clearly maladjusted, so let?s see what someone else has to say about the book. Here?s an anonymous reader?s thoughts on Letters to E.T., taken from the book?s Amazon.com entry. (Grammatical and spelling errors reproduced for your enjoyment):

Good book for E.T.fans, August 3, 2000
By A Customer
That is a very good book it is about fans that send E.t. and Steven Spielberg.The leters are funny, strange,and sad.Perfect for anbody who likes E.T. especially kids.They have good pictures and even two family circus comics with are good friend E.T. Buy the book.If you like Steven Spielberg`s movies.

Funny, strange and sad. That about sums this one up.

The perfect toy for amateur proctologists and budding perverts alike, Knickerbocker?s E.T. Finger Light earns the top spot on this list based on appearance alone. I can?t imagine too many parents were thrilled with the idea of giving their kids something that looks like it came from a fetish shop. As for the toy?s actual play value, well, you put your finger in it and it lights up. Fun? Probably not. But neither was spending most of Christmas 1982 stuck in a damn pit while playing the E.T. game.