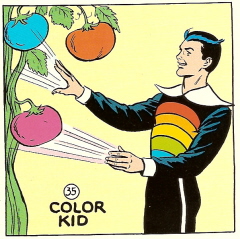 We should probably preface this list by saying most of the Legion of Super-Heroes are pretty shitty?at least in name. Cosmic Boy? Element Lad? Supergirl? For a team who?s supposed to exist 1,000 years in the future, you?d imagine they?d at least have cooler names. Fortunately, out of the 932 or so LoSH members out there, a good lot of them are actually quite awesome. Karate Kid? He?d fuck your shit up faster than you could say ?sweep the leg.?

But alas, there are truly some lame-ass Legionnaires out there, starry-eyed kids who you just hope will get offed by some equally goofy member of the Legion of Super-Villains or Fatal Five. But take a step back, look closely at some of these douche bags and you?ll see that a few of them could actually be cool. Except you Bouncing Boy. You just suck. 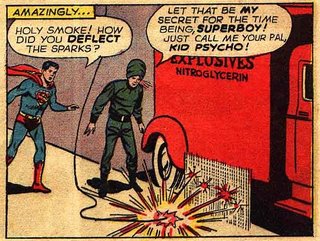 Real Name: Gnill Opral
Powers: He has mind powers that pretty much allow him to do anything. Any. Thing. If he thinks really hard, he can travel through time. Unfortunately, every time he uses his braintastic fury, he shortens his lifespan.
Why He?s Shitty: It?s bad enough that Psycho?s powers kill him, but they also make his head horrifically large. And those dickhead Legionnaires wouldn?t even let him become a full-fledged member. They gave him a ring and made him a member of the Legion Reserve. Dick moves all around.
Why We Love Him Anyway: He?s a fucking badass. He may look like an ugly, overgrown turban-wearing baby, but he?s 100% hero. Gnill knows that every time he uses his powers, death comes a bit closer, but he just doesn?t give a fuck. He?d rather die saving the universe than sit by and let his massive powers go to waste. And ya know what, this dude has a legitimate reason to pull off the brooding, rockstar act that chicks love. Believe it: Live fast, die young with a big head. Kid Psycho FTW.

Real Name: Dag Wentim
Powers: He can turn into stone. And sometimes he can even move while all stoned up.
Why He?s Shitty: Dude turns into a big statue. Sure, in time he built up the skills to move while in stone form, but he mostly rocks the inanimate route. He?s kinda like Mario when he wears the Tanooki suit in Super Mario Bros. 3?just without the awesome ability to fly.
Why We Love Him Anyway: First, he had the balls to turn down membership in the Legion of Super-Heroes, instead opting to remain with the Legion of Substitute-Heroes. Second, turning into a stone dude isn?t so bad if you can work your mojo and transcend the statuary state. And once you get that trick down, who?s gonna mess with a dude who can turn into rock mid-punch? Nobody. 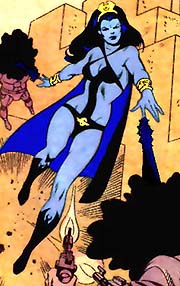 Real Name: Tasmia Mallor
Powers: She can project darkness. Complete, inescapable darkness. Darkness so thick she can stab you with it. Seriously.
Why She?s Shitty: Miss Gloomypants here is gonna bring nothing but sadness, black lipstick and bad poetry with her everywhere she goes.
Why We Love Her Anyway: Goth chicks rule. They?re game for just about anything and with those powers, Shadow Lass has GOT to be queen kinky. If you can get past the doom and gloom, her abilities to not just stab you with her darkness, but see perfectly in it, could come in damn handy. 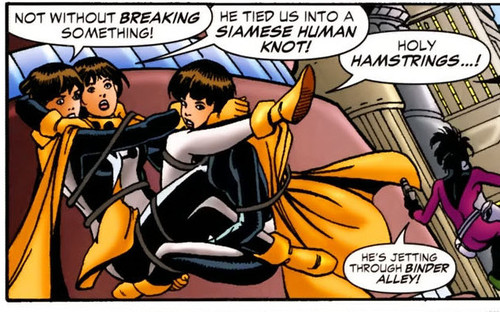 Real Name: Luornu Durgo
Powers: Like all the people on her native planet Cargg, Luornu has the ability to split into three identical bodies (at least in one version of her continuity?it?s DC, so there are other interpretations).
Why She?s Shitty: It?s hard not to compare her to Marvel?s Madrox the Multiple Man. He can create a shit-ton of duplicates. Her? She becomes three. And while everyone on her planet can swing that trick, she gets to be the one called Triplicate Girl? Boo.
Why We Love Her Anyway: Triplets are hot, but there?s a whole new level of pervy goodness when the triplets are all the same girl?argh?brain hurts?right? Anyway, while she may be limited to three bodies, it definitely opens up some doors for subterfuge and spytastic goodness. Luornu also practices the ancient martial art of Tri-Jitsu, something ya really don?t see in someone with just one body. 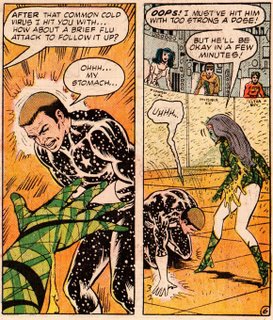 Real Name: Drura Sepht
Powers: She?s a walking, talking dirty bomb, capable of generating infections diseases, all of which she carries and is immune to.
Why She?s Shitty: Infectious Lass must lead one lonely existence because who really wants to be friends with a chick who projects diseases? SARS! Flu! Scabies! Also, she doesn?t have much control over her abilities so?watch out!
Why We Love Her Anyway: To be fair, the reasons she?s shitty are pretty much the same reasons why we like her. She?d kill at a party and as a weapon? Throw her out on the battlefield and it?ll be like the vomit scene from The Exorcist mixed with Saving Private Ryan. 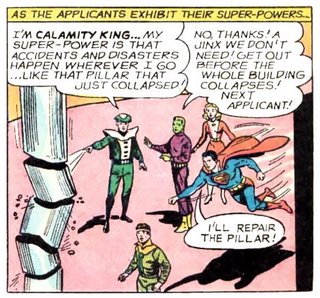 Real Name: E. Davis Ester
Powers: Sort of like bad luck powers, Cal causes accidents and disasters.
Why He?s Shitty: A master of disaster, Calamity King just breaks shit. That?s pretty much all he does. And the only time he got into the Legion of Super-Heroes was in a period never shown in the comics. Plus, he wears a really stupid hat.
Why We Love Him Anyway: There?s just something intriguing about a loser with powers that are like a reverse Longshot crossed with Karnak of the Inhumans who also has the chutzpah to call himself a king. Aside from occasionally crippling your friends, you can have some real fun with Cal?s powers. Just steer clear of that hat. 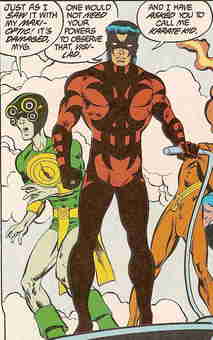 Real Name: Rhent Ustin
Powers: He has telescopic, microscopic, hypnotic and heat vision.
Why He?s Shitty: Take away most of Superman?s cool powers and BAM, there?s Visi-Lad.
Why We Love Him Anyway: Despite the awful costume (yes, that?s definitely one of the recurring themes for characters on this list) and the fact that he just sees real good, it would be pretty fucking rad to have all those abilities. You can go to a party, hypnotize someone and then burn their eyebrows off with your heat vision! The only thing he?s missing is X-Ray vision. Sweet, sweet X-Ray vision. Fucking Superman?

Real Name: Ulu Vakk
Powers: Ula changes the color of stuff! That?s it!
Why He?s Shitty: After being hit by a beam of multi-colored light, this Legion of Substitute-Heroes member got his totally craptastic power. Didn?t one the Flashes get superspeed after a beaker of Science Juice? splashed on him in a lab? Sucks for you, Ulu! Oh, and later in his career?after changing his name to Color King?he was turned into a chick and dubbed Color Queen.
Why We Love Him Anyway: The lord of the light spectrum may not have the sheer power of Cosmic Boy or Lightning Lass, but he commands the color wheel! Okay, so Color Kid?s totally lame, but he?s like a walking Pride flag and he gets props for that. Plus, there’s something hugely ballsy about getting the power to change colors and thinking that makes you a superhero. 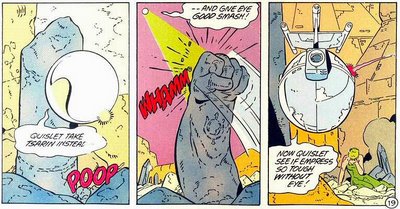 Real Name: An unpronounceable glyph whom the Legion calls Quislet.
Powers: A tiny energy being who flew around in a tiny spaceship, Quislet could possess inanimate objects?an act that would invariably destroy them.
Why He?s Shitty: He?s a little bitty energy guy in a spaceship who goes around causing mischief in said spaceship or giving faux life to objects. He was some sort of refugee from a distant dimension who hangs with the Legion, rights some wrongs and has fun. Corny and annoying.
Why We Love Him Anyway: Despite being cheesy, the little no-body-having bastard actually brought a bit of fun to the frowns and stormclouds of the team. And everything he touches, he destroys?but he (it?) refuses to get all emo about it. He just destroys more shit. 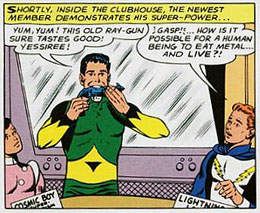 Real Name: Tenzil Kem
Powers: Strangely enough, Matter-Eater Lad can eat any form of matter.
Why He?s Shitty: He?s your standard ridiculous Legion of Super-Heroes character who comes from a planet where everyone has the same weird ability that sets them apart from other people from other planets with other weird abilities. And worse than the people who can grow or shrink or take off their genitals and turn them into parachutes, Tenzil and the people of Bismoll can and will eat anything. It doesn?t really put him in the same class as Mon-El?or even Porcupine Pete, ya know?
Why We Love Him Anyway: At first glance Matter-Eater Lad has one of the lamest powers in comics, but in reality his mouth is a weapon of mass destruction! Okay, well, maybe that?s going a bit far, but being able to eat anything would be fucking sweet. That evidence we?ve been concerned about? Eaten. The Magna Carta? Eaten. The end of this article? Eaten.