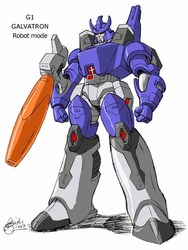 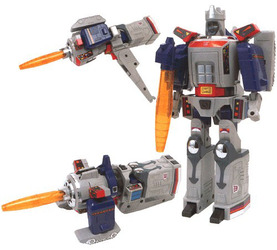 Life is good for young Transformers fan who grew up on shows like Armada and Energon, and are currently enjoying the Transformers: Animated series. When they walk into a toy store intent on purchasing action figures of their favorite characters, chances are they?re going to recognize them. That hasn?t always been the case.

Back when toy construction was much more primitive than today, the animators of Transformers took one look at the brick-shaped toys they were supposed to be drawing, shrugged, and went ahead with designs that would actually look good in cartoons. This left a generation of kids with the severe disappointment of finding that its favorite Transformers characters from the show had piss-poor representations in toy form. Here are nine of the worst offenders of ?the toy doesn?t match the animation model? syndrome that left the children of the ’80s with crippling trust issues we’ve never quite gotten over. 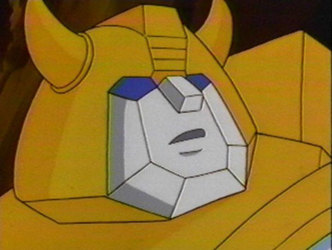 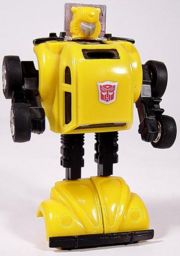 Remember Bumblebee in the Generation 1 Transformers cartoon? That sweet, bubbly, grinning guy who turned into a Volkswagen Bug? Kids in the 1980s found that while the body of the toy looked pretty much Bumblebee?s, the expressionless robot face it came with made toy Bumblebee look like he?d rather fry your face off with his eye-lasers than be your pal. As it turned out, cartoon Bumblebee?s face was based more off of fellow minibot Cliffjumper?s than his own toy. Takara, who produces Transformers in Japan, righted this in 2004 when it re-released the original Bumblebee toy with a cartoon-accurate head. 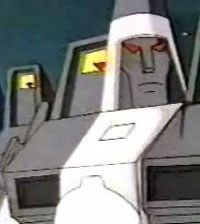 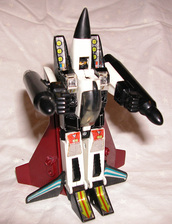 Boy, does Hasbro like to repaint its Transformers toys and sell them as different characters! During the early years of Transformers, they would even release several different versions of the same toy at once, dressed up as different characters. A good chunk of the early Decepticon force was made up of a jet fighter robot, sold with different decos as Starscream, Thundercracker and Skywarp. When Hasbro decided to release the toy as yet three more Decepticons, albeit with different-styled wings for each new character, the producers of the cartoon decided they has to do SOMETHING to differentiate the new characters from the three original seekers (as they?re called by fans) and the horde of background characters sporting the same design that had been shown in the cartoon. This was done by drawing the three new Decepticons?Ramjet, Thrust and Dirge?with their jet nosecones on top of their heads, a neat idea that worked wonders in making them look different. Kids, of course, wanted to do the same thing with the toy versions of the characters but found that leaving the nosecones up made the fearsome Decepticon air warriors all resemble Beldar Conehead, since the nosecones couldn?t shrink down like they did in the cartoon. Hasbro would release properly-coned versions of the characters in the 2007 Transformers Classics line, although Dirge and Thrust were only available in a very limited and now insanely expensive Botcon exclusive boxset. 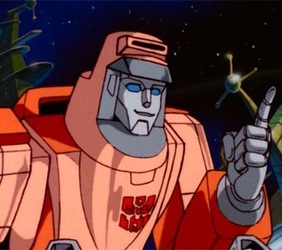 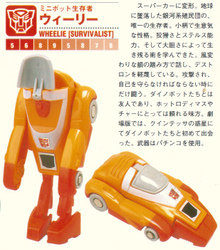 If you?ve seen Transformers: The Movie, you?re probably asking why anyone would want a toy of Wheelie. He was uber-annoying, a childlike character that spoke in a distorted screech and rhymed everything he said. However, some kids must have been gluttons for punishment and desired to recreate Wheelie?s adventures in their living rooms. Wheelie had a good design in the cartoon, streamlined and humanoid. His toy, however, made him look like the Robot Hunchback of Notre Dame. It?s hard to be too mad at Hasbro, though, since Wheelie deserved to have a bad toy. 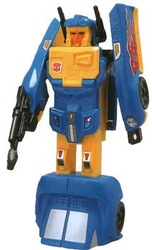 Nightbeat, the Autobot Headmaster who fancied himself a detective, never actually appeared in an American Transformers cartoon. His toy was released after the show was canceled and he was only depicted (and gained popularity among fans) in the comic books, where he looked fairly similar to his toy, aside from heaving a cooler-looking head. Nightbeat?s dark secret is that he did appear in a cartoon but with one major difference?he was a woman. In the Transformers Super-God Masterforce cartoon, exclusive to Japan (as if the title didn’t give that away), Nightbeat was a female Transformer named Minerva, an extension of the girl who piloted her. I?d like to see Nightbeat solve the mysterious case of how he got a sex change! What sucks is that countries outside of Japan could have had their first female Transformer toy, but the toy company suits probably feared boys would revolt and released Nightbeat instead. Nightbeat ended up being a great character, though, so it?s pretty much a wash. 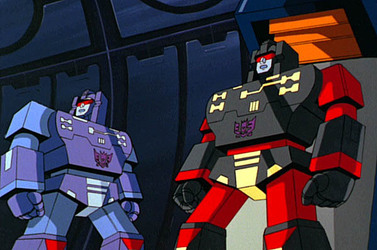 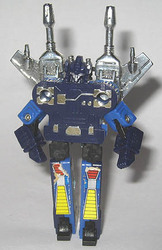 The toys of Soundwave?s cassette tape minions Rumble and Frenzy look a lot like their toys. That?s not the problem. The problem is that the cartoon messed up so badly in figuring out which colors those twin characters were that no one can any longer figure out who?s who. If you don?t believe me, go to any Transformers message board, ask for opinions on the ?Frenzy is blue/Rumble is red? debate, and watch the shitstorm begin.

Here?s a brief recap of what happened: In the toyline, Rumble was black with red highlights; Frenzy was various shades of blue. The cartoon showed both characters, but more often featured wiseass punk Rumble, who appeared to be purple. Frenzy appeared in the cartoon to be black and red, the colors of Rumble in the toyline. So, most fans that wanted a toy of Rumble, the more prominent character in the show, would reach for the blue Frenzy toy, since his colors were the closest, but he wasn?t the right character. Confused yet? Good, I am, too.

Galvatron erupted on the scene explosively in Transformers: The Movie, turning into an awesome-looking cannon and blasting Starscream into dust. Galvatron was really Decepticon leader Megatron, given a powerful new body by the planet-devouring robot Unicron, and provided an awesome new voice by Leonard Nimory. Galvatron looked deadly, all futuristic curves and pointy, purple stylings. It was therefore sad that this mighty new version of the Decepticon leader was a let down in the toy department. As a toy, Galvatron was actually one of the better-articulated toys in the original Transformers line. He looked kinda decent as a robot, although nowhere near as dynamic as his cartoon model, and his cannon mode was stumpy. But you know what Hasbro?s most egregious error was? Galvatron wasn?t purple! Darn it, he was gray! Being purple and not caring one damn bit about it was part of what made Galvatron great. Japan would once again come to the rescue by releasing a purple Galvatron in 2005. Hasbro is coming out with a Transformers Classics Galvatron in 2008 that has a robot mode similar to the cartoon version, but unfortunately they chose to make him a tank instead of a cannon. 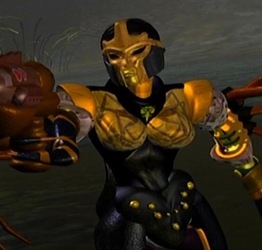 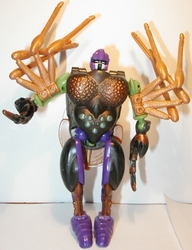 In the Beast Wars cartoon, Blackarachnia was a sultry vixen who fought for the evil Predacons but had her heart won by the gallant Maximal Silverbolt and ended up switching allegiances. Every fan surely desired a sexy, curvy Blackarachnia figure to pose locking arms with the Silverbolt figure, but poor Silverbolt might have reconsidered his feelings when he saw the original figure that Blackarachnia was given. The problem was that the chunky, not-so-feminine beast was never designed as a female figure at all, as it was first released as the male Predacon Tarantulas. Sure, the spider?s eyes kind of look like breasts in robot mode, but you have to squint and think thoughts that will ultimately disgust you. The creators of the cartoon just took a lot of liberties when including a female Transformer in their show. Hasbro would later release more feminine versions of Blackarachnia. 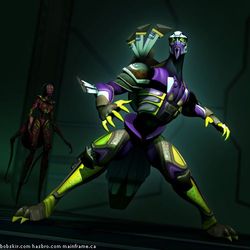 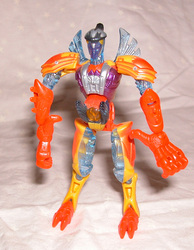 Silverbolt was a lovable character in the Beast Wars cartoon, a heroic Maximal who was too noble for his own good, and chivalrous to the point of hilarity. He also could turn into a flying wolf, and it doesn?t get much better than that. Beast Machines, the sequel to Beast Wars, was a grittier show and Silverbolt was converted for a time into an evil Vehicon. His Maximal pals rescued him and he got a new body, although his personality was a lot more serious and angrier than before. His new body in the cartoon was based on a condor and looked pretty decent but the toy, dear God, what was that thing? Just see for yourself? 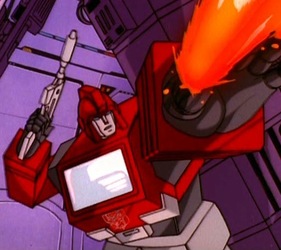 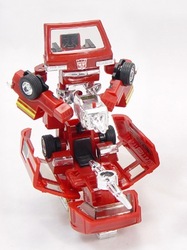 Two of the coolest of the original Autobots who crashed on Earth were Ironhide, the grumpy veteran who talked in a Southern accent and was good friends with Optimus Prime, and Ratchet, the Autobot?s resourceful doctor. Aside from Ironhide being red and Ratchet being white and having a crest on his head, they looked pretty much identical. Ironhide especially was an important character in the cartoon, while Ratchet got the spotlight in Marvel?s Transformers comic book series. It was a sad day indeed when they bit the dust in Transformers: The Movie to make way for the next generation of characters. It was an even sadder day when a child went to Lionel Kiddie City and discovered the travesty that Hasbro called the Ratchet and Ironhide toys. Sure, their vehicle modes looked just like they were on the show, with Ironhide being a van and Ratchet being a van with ambulance lights mounted on top. Transformed, however, they looked nothing like the blocky, humanoid robots we had come to know and love on the cartoon. First of all, the back part of each already-small van separated and became a battle station, which wasn?t too bad on its own. The front of each van became these tiny robots that were flimsy and didn?t even have heads! Ratchet and Ironhide were known for their bucket-noggins in the cartoon but in toy form only had little tabs, each decorated with a sticker of a god-damned smiley face!

What?s worst is that Hasbro waited forever to release more cartoon-accurate versions of these popular characters. Botcon pounced on the opportunity to release better versions of the toys in 2005, but once again they were very limited and now require a mortgage to buy. In 2008, though, Hasbro will finally release a decent version of Generation 1 Ironhide in the Transformers Classics series. Japan is repainting and retooling the toy as Ratchet, so he is likely to see release elsewhere, as well. It?s about damn time, Hasbro. To hold you over until those come out, company Best Toys has released custom heads that can be added to your original G1 Ratchet and Ironhide toys to make them somewhat less embarrassing.