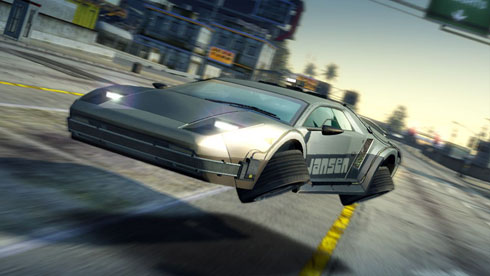 I would be a horrible all-inclusive nerd-site writer/editor if I failed to inform you that in Burnout Paradise, the rather excellent racing game, you will be able to drive the Delorean from Back to the Future. And I don’t mean a Delorean?I mean the Delorean, which switches from drives to hovering mode (I just peed my pants) and with flaming tire marks. It’ll be downloadable content for both the Xbox 360 and PS3 versions of the game as part of the “Legendary Cars” pack, which includes three cars mysteriously named Cavalry Bootlegger, Manhattan Spirit and the GT Nighthawk. I’m betting this isn’t over being awesome. Not by a long shot. (Via Joystiq)