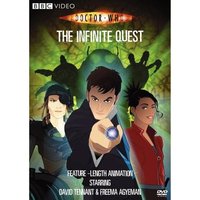 ? Doctor Who: The Infinite Quest
How did I not know there was a Doctor Who cartoon? Are there others? Isn’t making a live-action Who cheaper than making a cartoon? What the hell is going on here?

? Star Trek: Season 3 Remastered
The shiny new version of the last season of the original series with “improved” special effects. Given the general love for the new Trek trailer over the weekend, I imagine this set will sell reasonably well.

? Death Note Box Set 1
The first 20 episodes of the show with the silly premise of a killer notebook taken utterly seriously. This will be the first anime DVD I have bought in years.

? Charmed: The Complete Series
Just man up and buy a Girls Gone Wild video. It’s what you obviously want, and overall, it’s less embarrassing to own.

? Monty Python Megaset
All the TV episodes, the Personal Best specials, and more. It’s 21 DVDs, and it’s seriously on sale for $90 at Amazon.

? Saber Rider and the Star Sherrifs
Another ’80s anime imported to America turned into a goofy cartoon. I have zero recollection of this one, actually, but the art they dug up for the DVD cover is pretty cool.

? Executive Koala
Read the product description, and be amazed:

Tamura is an average Japanese salaryman working in the offices of a pickle distribution company. He is well liked in the office, hard-working, polite, wears a suit and tie, and also happens to be a six-foot tall koala bear. But when his girlfriend Yoko turns up dead one day and Tamura is the chief suspect, he is forced to enlist the help of his boss (a white rabbit) and a friendly convenience store attendant (a frog) in order to prove his innocence.

Oh, Japan. I always remember why I love you in the end.