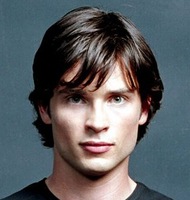 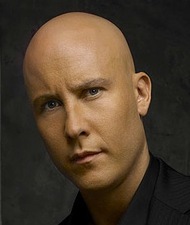 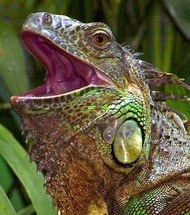 The iguana confirmed that he could really talk as soon as Clark got him into the loft of the barn. And then he wouldn’t shut up.

…the iguana moaned, then paused. “Could you let me out of this cage already? I need to stretch my legs.”

Clark looked at him skeptically for a moment, and then figured that it wouldn’t really bother him that much if the iguana did decide to run away. He undid the latch, and the lizard crawled out lazily, and then stretched his legs. Really stretched his legs. It looked like some strange kind of pilates done on four legs. “What’s your name?”

“Raphael Michelangelo Donatello Leonardo.” Clark stared at him, and he gave a little lizard shrug. “The kid liked the Turtles. Anyway, you can call me Rafe.”

Needless to say, [Clark] was surprised when Lex let him in without so much as a word. At the door. Himself.
…
In that moment, something in Clark broke, and he couldn’t see Lex as the man he knew was responsible for the deaths of many others, as the one who’d almost had Chloe exterminated, as the person who had constantly been digging into his life, trying to unearth all his secrets. He saw the Lex that he had known when they were still friends.

“Lana’s gone,” Lex said simply, heading back to his office. Clark hesitated, remembering why he was there. He shook his leg, and from the end of his jeans came Rafe, looking as perturbed as an iguana could manage to.

Clark stood still, listening to Lex’s footsteps recede. When he was sure he was gone, he scanned the building, and found Rafe just outside the secret lab. He went out to greet him.

“Nothing,” Rafe said, crawling out from under a rug. “Not even blueprints. I saw you looking, too, you know.”

“It kept him distracted.” Clark reached down, scooping the lizard up in his hands. “No documents with ‘death ray’ written on them, even?”

“Nope.” Rafe wriggled in his palm, climbing up his arm impatiently. “But I did notice him staring at your ass a lot.”

Clark didn’t know how to follow that up. There was something too phallic for Lex Luthor?

“I think humans call it bisexual, genius.” How could an iguana look so smug?

Clark wondered if it would be too weird to yell at his own crotch.

Basically, the talking iguana in his pants, by doing an uncanny Clark impression, comes onto Lex in Clark’s stead. Lex, having recently been left by Lana, graciously accepts.

Clark wasn’t exactly sure what to do anymore, but Lex certainly was. There were hands on his skin, under his shirt, brushing nipples, making him arch involuntarily, his mind chanting IamnotgayIamnotgayIgamnotgay. Apparently his tongue and dick were disagreeing with all of his central nervous system on their own, and maybe his alien body really did have separate brains for separate organs. His hands, too, because instead of pushing Lex away when one of his hands went to the fly on Clark’s jeans, they grabbed his shirt, his crisp, clean shirt, so Lex, and pulled. When he felt a hand on his cock, he was gone. His brain was finally agreeing, though; IamsogayforLexIamsogayforLexIamsogay.

In the excitement, Clark knocks over a wall with his super-breath, and finds the death ray. Cue wacky trombone noise, and the end of the scene well before penetration occurs. Happily, Rafe gets his own wacky epilogue, which isn’t all that funny except for the following:

Rafe ran down the road, his pace impressive for an iguana, but still rather pathetic overall. He was out of there. Smallville sucked.