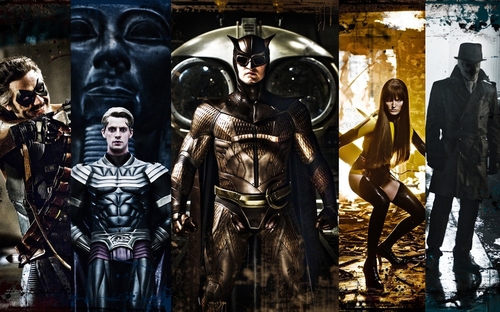 While we nerds are freaking out about GiantSquidGate, there’s still that pesky lawsuit between Warner Bros. and Fox that needs settling if we’re ever going to watch the damn movie and see if Snyder’s new ending is blasphemy or a decent replacement. AmLaw Daily–an online law news site–recently wrote up the Watchmen case, and while there’s not a lot of new news, it’s interesting to see the case viewed from a non-nerdy standpoint:

In one corner, we have Warners, the studio producing the $100 million-plus movie. Originally represented by Glaser, Weil, Fink, Jacobs & Shapiro,
the studio was confident in its claim that Fox gave up all rights to
the film in a convoluted series of deals with an independent producer,
Lawrence Gordon, in the early 1990s. They were confident, that is,
until August, when a federal judge ruled that Fox may have a claim and refused to grant Warners’ motion to dismiss the Fox suit.
…
Perhaps taken aback, Warners reached out to a big Hollywood gun: Irell & Manella‘s
Steven Marenberg. Marenberg most recently guided “Lord of the Rings”
director Peter Jackson to a $40 million settlement with New Line Cinema
over payouts from the blockbuster “Lord” trilogy (an Am Law Daily
favorite). New Line at that point was a Warner subsidiary; apparently
they liked what they saw across the table in Marenberg.
..
The two sides take very different strategies in their motions filed
this week. Warners comes out firing, saying Fox, even if it did once
own a right of first refusal, gave it up by not exercising it for more
than a decade while three different studios batted around possible
“Watchmen” projects. They characterize Fox’s suit as a last-minute
attempt to attach itself to a film that looks like it will be a hit.
But later in their motion, the studio says it’s willing to accept a
partial summary judgment ruling. What that means is unclear; it could
mean that Fox will end up with a percentage of distribution rights or
that Warners will pay Fox an unknown amount to secure full rights to
the movie. Fox, on the other hand, is going for a home run. They ask for
nothing less than the sole right to produce “Watchmen” and distribute
it in the U.S. and abroad.

The hearing is still set for December 15th, not too far off from now.The fact that Fox hasn’t budged from its “all or nothing” position does not bode well, but since Warner Bros. hired the lawyer who kicked their own asses during their suit with Peter Jackson, you can’t count them out yet. We shall see. And many of us will bitch either way.