Menu
Home
>
Cartoons
>
The 10 Greatest Cartoon Bands of All Time 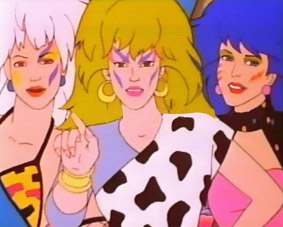 If you’re like us, you planned your future adulthood on all the things you saw in ?80s cartoons and you planned on being a superhero, space explorer or ghostbuster when you grew up, just like your favorite cartoon heroes. But there was one profession that clearly topped all others: music star. It seemed like every cartoon had at least one musical character that would be dragged out for a special episode now and then , if not an actual band as the stars of the show (hey, even the Transformers had Jazz and Blaster…even if they never cut actual albums). But all this musical cartoon mayhem begs the question…which animated band rocked the most?

We at Topless Robot are out to answer that question with our list of the ten best, based on the criteria that regular bands are judged: how much money they make, how popular they are, both in the real world and their show?s world,and how often you can listen to their songs without bashing your head in with a rock (if only real bands were judged the same way).

While you may (or may not) remember them as a team of intergalactic Western-themed crime fighters (and no, not the intergalactic Western-themed crime fighters you’re thinking of), they did win a galaxy-wide battle of the bands contest while undercover as a group called…the Galaxy Rangers. Unfortunately, that’s not their only un-creative move, as all their instruments were played for them and even that was only their own theme song. Oh, and they won the contest by default. Still, their theme song was kinda catchy in a Foreigner-power-ballad sorta way, their guitars shot lasers and they were the closest we’ll get to seeing a young Clint Eastwood front a band?all of which has to count for something.

If you don’t remember this ?80s Saturday morning cartoon, it features a lead singer Kidd Video and his band (egotistically also named Kidd Video), pulled into a cartoon world called “The Flipside” where they had to avoid being exploited by the evil and tubby record executive Master Blaster. Now, they’re not entirely a cartoon band, as they also appeared in live-action videos throughout the show (Look closely and you’ll notice that Robbie Rist, the Brady Bunch’s cousin Oliver played Whiz in both), but as they’re infinitely less annoying as cartoons, they get on this list. While the music is straight ’80s bubble-gum pop, they were at least popular enough on the show to be getting record company offers from another dimension?which is a type of popularity not even Rolling Stone can get you.

Perhaps the ultimate garage, er, junkyard band, they clawed their way up from poverty to, well, more poverty. But, they did deliver some catchy, soulful tunes that also coincidentally contained the message of each day’s show. They also showed us that musicians don’t need amazing instruments?just some rusty radiators and bedsprings. Although how they got that amazing funky bass sound out of all those pipes that remains a mystery. (Also, how did no one die of tetanus?)

7) The Neptunes from Jabberjaw

The Neptunes would seem to have a lot of strikes against them: They only tour underwater cities, they’re in the future (where they have to compete more robot bands, presumably)…oh, and they have a shark that sounds like Curly from the Three Stooges as a drummer. Oh, and just about everything about the show was stolen from earlier shows as far back as Gracie Allen. But despite all that, they put out some peppy scooby-doo-esque music that fit well into the scooby-doo-esque chase scenes. And they have to be pretty popular to have these undersea cities waste their precious air, especially on these cardboard stereotypes.

6) Jet Screamer from The Jetsons

This one-hit wonder held Judy Jetson’s teenage future brain hostage with his space-hunkiness and space-grooves, but his real strength is his ability to make space hits out of garbage. After all, he was able to take a nonsense phrase from Elroy’s creepy made-up, Nell-like Martian language and craft it into the hit “Eep Opp Ork Ah Ah,” a song so catchy it’s one of the few things most people remember about the Jetsons and was even covered by the Violent Femmes. Sure he never appeared again, but the Big Bopper only really had one hit, right? Oh, and anyone who can sing while accompanied by the whitest guy in the future, George Jetson, obviously has some musical chops.

Cold Slither is the definition of both a one-hit-wonder and, to a greater extent, a Cobra-Commander-used-subliminal-messages-to-create-a-one-hit-wonder. Yeah, he just dressed the swamp-living Dreadnoks in Poison’s second-hand clothes and managed to hypnotize enough kids to fill a mid-size arena somewhere in America’s heartland. (And you know it’s popular because one elderly teacher hates it.) Even though they only had one song, the self-titled Cold Slither, which exists just to pretty much hammer home the point that they’re called “Cold Slither”, the single popped up a couple more times on the show, proving that it was probably a minor macarena-like fad in the Joe universe. But, like most musicians (and Ted Nugent), they’re undone by girls?namely G.I. Joe groupies who proceed to beat the living daylights out of them and later take the stage as “The Average Joe Band,” whose records are probably still clogging the Joe Base’s gift shop clearance bins.

Imagine a pretty competent bar band?nothing too spectacular, but you’d pay a couple bucks to hear. Got it? Now imagine they’re the GREATEST MONSTERS OF ALL TIME! That’s what the Ghoulies are: Dracula, Wolfman and Frankenstein, all hanging out in their castle and playing their instruments, which happen to be an organ, skeleton xylophone and some sort of wolfman Ravi Shankar sitar. So, while they’re not the best band, taking the most fearsome and popular monsters of all time and managing to fit rehearsals is pretty impressive, not to mention sating their relentless thirst for human blood. (We hear the Electric Mayhem had the same problem.)

3) The Misfits from Jem

Let’s face it, jerks are more interesting than good guys and they definitely make better music. (How else do you explain Axl Rose’s success?) And while Jem and the Holograms dished out some generic, happy pop tunes, the Misfits were putting out songs that talk about greed, fame and how great they were. How good were they at writing songs? Well, they came up with “Welcome to the Jungle” long before that other jerk Axl did. And as for success?they were always going to ski resorts, charity functions and magic-related TV specials. That’s how you measured success in the coke-filled ’80s.

2) Josie and the Pussycats

Don’t be fooled by the live-action movie?the original pussycats were all about sending out smooth, Motown songs while being chased by bad guys. Sure, most people are only familiar with their catchy theme song and “Long tails, ears for hats” costumes, but if you listen to the rest of their work, you’ll find some slightly funky, get-stuck-in-your-head tunes that were popular enough to warrant a real-life best-selling album under their ‘toon names. (Sure, the Archies did it before, but the fact that they wrote one of the most annoying songs ever?”Sugar, Sugar” and that Archie couldn’t choose the obviously better Betty?means they ain’t on this list.) As for their cartoon success, it’s hard to find a more popular, hard-touring group. I mean, at any given day, “they could be India…or in France.” They don’t even know!

You were probably expecting some controversy here, but hands down, these guys beat everyone in every category. In the cartoon world, they’re so popular that they make more money than most governments and fans regularly sign “death wavers” in case the band kills them at concerts! In the real world, their Dethalbum was a smash hit and made it to #21 on Billboard’s 200 list. Heck, the guys behind the cartoon Brendon Small and Tommy Blancha, even tour as Dethklok around the country and their songs have found their way onto Guitar Hero II (“Thunderhorse”) and the Saw II soundtrack (“Hatredcopter”). So, we’ve got a band that’s clearly the most popular ever in their cartoon world and doing better than many bands in the real world. Oh, and they’ve got a raw, shredding sound that many felt was lost forever with the death of the ?80s. Sounds like a winner to us.