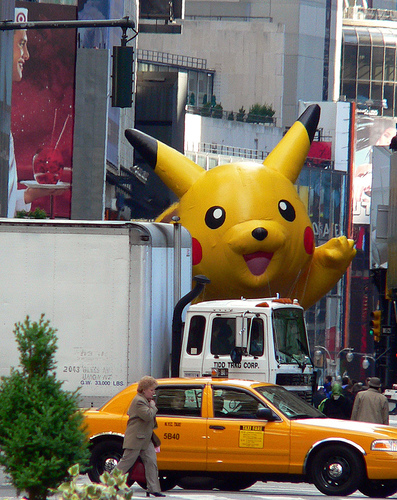 Debuting in 1924 as an advertising promotion, the Macy’s Thanksgiving Day Parade has become as much a part of the holiday season as aggravation and forced conversation with family members. It’s not the thrill of watching celebrities wave from floats or the joy kids experience when they see Santa Claus arriving at Herald Square, but the remembrance of a simpler time that makes the parade so endearing. Also, people hope they’ll see innocent bystanders get clobbered by the parade’s massive helium balloons. At least this has been the case in the past couple of years. In 1997, a woman wound up in a coma for three weeks after a Cat in the Hat balloon knocked down a street lamp that injured her (the balloon was retired from the parade shortly thereafter). A similar incident occurred  in 2005, when an M&M’s balloon gone astray injured 2 parade goers–including a woman in a wheelchair. Are high winds to blame, or are the balloon handlers just drunks? Whatever the reason, the balloons have found themselves with a major PR problem on their hands. In an effort to restore the public’s faith in rubber representations of popular characters that fly high through the streets of Manhattan, Topless Robot presents this list of the 10 most awesome (and least dangerous?) balloons from the history of the Macy’s Thanksgiving Day Parade.

No matter how jaded of a bastard you may be, there’s a pretty decent chance that you have fallen under the spell of Hello Kitty. Sanrio’s endlessly marketable feline made her parade debut last year. That’s right, last year. It’s just wrong that it took so long for Hello Kitty to inflict her red-bowed cuteness on the people of New York City, but that’s the way it is. And listen to the audience cheer in the above clip. They are smitten. Caught in her heavily merchandised grasp, overwhelmed by her charisma. Never to be free again. Didn’t Jonestown start like this?

Kermit the Frog has been a favorite Macy’s balloon since 1977,  but his most memorable appearance was in the 1990 parade–his first following the death of Jim Henson.  As Henson’s family members gathered to watch Kermit travel the parade route, Willard Scott narrated a tribute to the man who touched the lives of lovers and dreamers everywhere. A word of warning though, there’s a good chance that watching the footage (which includes a haunting instrumental version of “The Rainbow Connection” ) will turn you into a blubbering mess.

A friend of mine who had the misfortune of working at Borders during the height of the Pok?mon trading card frenzy used to torment kid customers seeking the collectibles by telling them that they’ll “never catch them all.” I imagine that this balloon would be the physical embodiment of hell to him. But to the rest of us, it’s a flying yellow daydream. Even though Pikachu’s red cheeks make him look like a cheap whore. 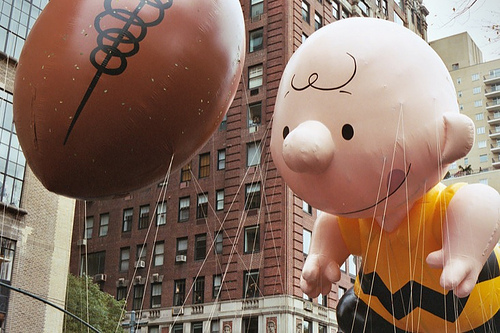 Life sucks. We are all chasing dreams that very few of us will actually get to realize. Just when we think we finally have made some progress, the Lucys of the world yank away our hopes and leave us lying in our own despair. The Charlie Brown balloon is a flying metaphor for human suffering, and I’m fine with that. Macy’s have included Snoopy balloons in the parade throughout the years, but all his antics do is encourage kids to live in fantasy lands where anything is possible and dogs enjoy root beer. Try landing a decent job with that kind of worldview. No, you are better off following Charlie Brown’s approach–fail early and often.

All that said, this Super Bowl ad from earlier this year warms my bitter heart.

It seems inconceivable that Pac-Man, Mario, or, God-help-me-it-would’ve-been-so-awesome, Donkey Kong never got to soar over the Manhattan crowds, but it wasn’t until 1993 when Sonic the Hedgehog became the first video game character ever to get a balloon in the Macy’s Parade. Sadly, this history-making event was nothing but a disaster for our spiky blue pal . Macy’s officials deemed the weather to be too windy for Sonic to complete the parade route, so previously filmed footage from rehearsals was shown to TV viewers. As if that wasn’t enough of an indignity for him to endure, Sonic was then punctured beyond repair when he was blown into a lamp post–our nation’s pride deflating with him.

To commemorate Bugs Bunny’s 50th anniversary, this 75-foot-tall balloon replica made its debut in the 1989 parade. Although a cross-dressing version of Bugs would have been more appropriate than the bullshit tuxedo get-up he was saddled with,  it was nice to see the character finally get his due. Nearly a decade later Bugs would be rendered culturally irrelevant thanks to a motion picture known as Space Jam. Way to shit all over the legacy of a timeless character, Warner Brothers. 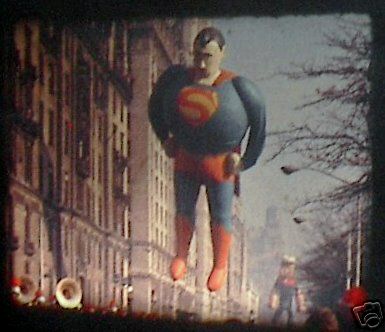 Still holding the record for the largest balloon ever to be featured in the parade, Superman has undergone several makeovers over the years. Initially appearing in 1939 as a  80-foot-tall upright balloon, he was later transformed into the flying version of Supes that a newly modified version of is still being used today. Note to you sadists out there: YouTube has some footage of a partially deflated Superman from the 1985 parade, but I just didn’t have the heart to post it here. From getting killed by Doomsday to the borefest that is Superman Returns, I think he’s suffered enough humiliation of late. 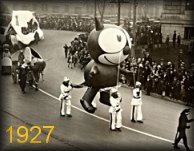 Since he’s just about the only cartoon character that Family Guy doesn’t reference, Felix the Cat remains largely forgotten by fans of contemporary animation. Given the greatness of Otto Messmer and Pat Sullivan’s creation, this is almost as depressing as the above screed about Charlie Brown/the emptiness of  existence. Here’s a quick intro: Felix is a mischievous feline whose adventures were similar to the early exploits of Mickey Mouse, only funny. He gained his greatest success in the early 1950s thanks to a TV cartoon series that saddled him with a magical “bag of tricks” and some new characters, including the villainous Professor. While purists celebrate the early animated Felix the Cat shorts and balk at the changes made by the television series, both incarnations of the character possess their own charms. That history lesson over, Felix is relevant to this list as he was the first balloon ever featured in the Macy’s Thanksgiving Day Parade, debuting in 1927.

With all the aforementioned balloon accidents that have marred the Macy’s Parade of late, it seems odd that none of these incidents have been caused by Super Grover. Well-meaning but utterly helpless, he spread clumsiness and disinformation wherever he went in his Sesame Street appearances. Since he was never an A-List Muppet, Super Grover’s rebirth as a Macy’s balloon is something of a minor miracle. Let’s just hope he doesn’t injure anyone during this year’s festivities.

There aren’t any YouTube clips of the balloon available, but there is the video above. And we should all give thanks for it.

One thing that Sam Raimi’s Spider-Man films got 100% right is how they portray Spider-man as a revered figure amongst New Yorkers. By setting their stories in the “real world,” Marvel has always had a slight edge over DC. While visiting New York City as a child whose Secret Wars Spider-man figure rarely left my side, I half-expected to see the Webhead or the Fantastic Four during my trips there. You can chalk this up having a serious problem distinguishing between fantasy and reality, but the Marvel comics and cartoons I had been exposed to made me feel like the city was populated by regular folks and superheroes alike. I suspect that this same sense of wonder is experienced by kids who were fortunate enough to see this 78-foot Spidey pass overhead. As for the following clip, well, the less said the better.