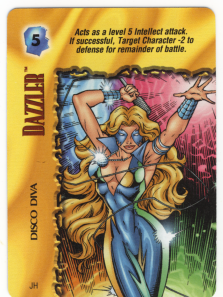 Wizards of the Coast broke open a gold mine when it released Magic: The Gathering in 1993. The company?s genius idea was to put out a product that appealed not only to gamers, but to people who like to compulsively collect cards. It was the birth of the collectible (or customizable) card game, the CCG, and Magic has lasted to this day, intriguing people with its addictive gameplay and equally addictive collectability, fueled by the search for randomly-packed rare cards.

But any success story will have its imitators, and Magic had about a gazillion of them. Heck, a magazine called Inquest arose just to cover all of them. CCGs flooded the collectibles market in the ’90s, many of them mediocre games that companies hoped to sell based on whatever license they had purchased. Pok?mon and later Yu-Gi-Oh! were very successful, creating or perhaps due to kids? fascination with little anime monsters duking it out. But the darkest corners of gamers? closets are littered with the sad remnants of many CCGs that had limited success or barely even got out of the gate. In fact, many of these games are hard to come by at all these days, even on eBay. Here are 10 CCGs that you?ve most likely forgotten about: 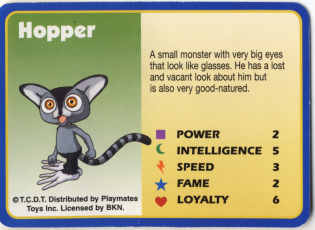 Pok?mon itself spawned several imitators, and Monster Rancher was one of them. However, Monster Rancher had its own charm and some unique qualities. While the videos games in the franchise had the familiar premise of training cute little monstrosities to do battle, they included a cool feature where playing songs from certain CDs in your PlayStation would create special monsters. There was also a toyline that featured great PVC figures of the characters, with varying numbers of them to each package; it would entice collectors by including a blind-packed figure in each package that could be one of several rare monsters. These toys were how you obtained the Monster Rancher CCG, as several cards came in each package.

The cool part about this CCG was that it incorporated the toy monsters’ asses into the game. You and your opponent lined up several of the critters, with a card face down behind each one. You then flipped the cards; if the toy monster matched the monster pictured on the card, they won and would collect points based on the symbols tattooed on their furry, plastic butts. 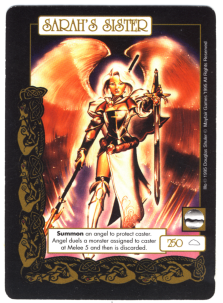 Did Fantasy Adventures desperately want to be Magic: The Gathering? You could be forgiven for thinking that, since it was a fantasy-based card game with some breath-taking art. The game was apparently an expanded reissue of another card game called Encounters and featured monsters, heroes, spells, swords and all that good stuff, battling it out in a straightforward combat system. According to the scant information out there about this game, it was meant to be generic so that its cards could actually be usable with other CCGs. Trying to use them at a Magic tournament was a good?and perhaps only?way to get your ass kicked by CCG nerds.

This game allowed you to control four costumed heroes as they beat the bejeezus out of their opponents using powers based on energy, fighting, strength and intellect. It was your basic comic book knock-down drag-out. What?s cool is that although the game started with just Marvel characters, it later added DC to the mix for some awesome crossover action. Can Spider-man beat Batman in a fight? Here was your chance to find out, true believers! The concept of a fighting system with combat between characters from both major comic companies was revived in Upper Deck?s Vs. System. 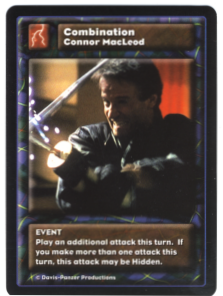 The Highlander CCG was that it was basically a fun system for sword-fighting with cards. You played cards that represented different dueling moves and did damage to different areas of the body, complemented by special moves specific to the immortal you were portraying, which could be one of several characters from the movies or TV series. Want to see once and for all who would win between Connor MacLeod and Duncan MacLeod in a straight-up sword fight? Now you could! There were of course other cards that influenced your duel in various ways. It ended when one immortal?s head came away from his body, just like in the confusing muddle of Highlander movies and TV shows. You don?t have to wait for the announced remake of the first movie for a new version of a Highlander CCG to come out, though. The second edition of this long-dead (decapitated?) game was recently released, and can be found by going here: http://www.highlandertcg.com/ 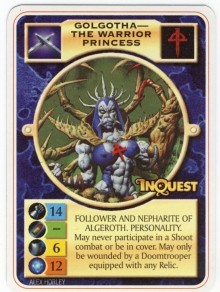 This game spun off from Target Games? own tabletop role-playing game Mutant Chronicles; both feature fantasy elements set in a post-apocalyptic world. In Doomtrooper, each player?s warriors battle to obtain Promotion within the ranks or to obtain Destiny, the currency of the game. You know, it kind of sounds like any office setting. 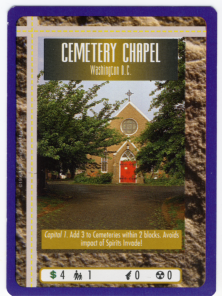 A great computer game does not necessarily a successful card game make; so learned the makers of the Sim City CCG. Players constructed a city out of cards, which boringly depicted real pictures of churches, houses, newspapers, etc. The player with the most profitable infrastructure won. At some point, most players must have realized they?d rather be playing the computer game and that was that. But there must have been a few real-life city planners who dug this CCG. 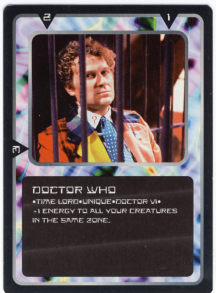 Poor, Poor Doctor Who. With approximately 30 years of backstory, this 1996 card game could have had a lot of depth, enabling players to travel through time and defeat crazy alien schemes. What we got was a straight-up battle game in which players fought with creatures, which even the Doctor was considered, in three time zones (past, present and future). The creatures were relegated to specific time zones, although Doctor cards could be played anywhere. This was an example of a game that had lots of pretty pictures from the property it represented, but lacked most of the personality and essence of the source material. The revival of Doctor Who on television has produced two new CCGs which, on the surface, don?t seem any better. 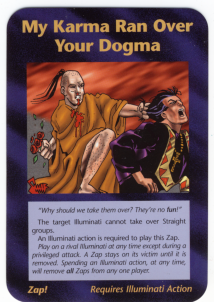 Illuminati might be the most fun game on this list. The game is based around the idea that there are several secret groups quietly pulling the strings of various people and entities as they attempt to gain control of the world. It?s all about conspiracies; this is the game Fox Mulder would have played in his downtime from the X-Files when not watching porn. In the game, each player controlled an illuminati, such as the Gnomes of Zurich or UFOs, and tried to gain control of various groups, such as Gay Activists and Girlie Magazines, which formed into a power structure spread across the table. A big part of Illuminati?s appeal was, unlike almost every other game on this list, it had a sense of humor. 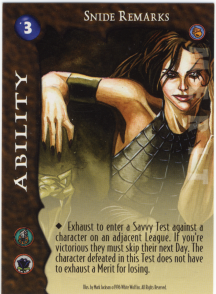 Arcadia was a very ambitious and inventive game that shook up the standards of CCGs. It seems like it should have took off but it didn?t. It was set in a fantasy world that was once connected to Earth but is only now accessible through dreams. The game was sold in story packs and in characters packs; you only needed one of each to play. Character packs included cards that enhanced the character you were playing. The coolest part was the character cards themselves, which were pop-up, allowing your character to stand vertically over the other cards. Story packs included cards that could be put together to form a terrain map that your character would traverse while completing quests and obtaining treasures. Arcadia was a very cool game, perhaps gimmicky, but it deserved a longer life than it got.

And here we have it, a CCG based on sex. While that might outrage some of you with conservative sensibilities or a modicum of taste, Phil Foglio?s XXXenophile, both in its original comic book form and later as a CCG, certainly tried to look on the fun and happy side of pornography. Certainly, the fake card sex was all consensual, and the art was humorously cartoonish, featuring a wide variety of characters, such as robots, mythological beasts, clones, etc., desperately trying to have sex with each other.

The CCG had players intermingle their cards?when all is said and done, you never know what you?re going to come away with. Hmm, maybe that wasn?t the best theme to include in a game about sex. Anyway, each player pursues 100 points, achieved by characters you successfully match up and ?pop.? Unbelievably, XXXenophile was later toned down to a G-rating, reworked and released as Girl Genius.