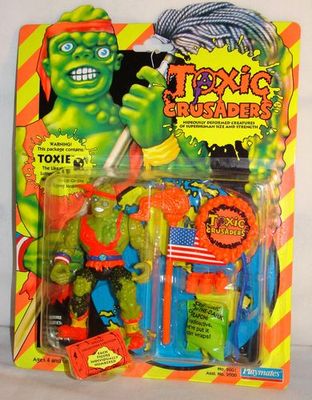 Living in an era where action figures based on slasher flicks like A Nightmare of Elm Street and House of 1,000 Corpses and violent action-fests such as Kill Bill and 300 can be found at your nearest Hot Topic, it?s easy to forget there was a time when toy lines based on R-rated franchises were rare. And rather than being marketed toward nostalgic 20- and 30-somethings with disposable income to burn, these toys were aimed (pardon the pun) squarely at children. That kids would have any idea who these characters were, much less want to play with them, is a tribute to their Joe Camel-like marketability, and either the stupidity or carelessness of their parents and/or guardians who took them to the theaters to see these flicks…and then buy the toys.

5) Rambo and the Forces of Freedom

The first Rambo movie, First Blood, was an intense thriller about a Vietnam vet who can?t let go of the horrors of war. Rambo II was an over-the-top action-fest in which dozens of bad guys are graphically, brutally killed and Rambo is sadistically tortured. Naturally, a kids? cartoon was developed in 1986.

Titled Rambo and the Forces of Freedom, the show was mostly a rip-off of G.I. Joe and served to sell the Coleco toys. Rambo and his pals fought a Cobra-like organization called S.A.V.A.G.E. (presumably in-between therapy sessions for Rambo?s PTSD). Check out the ad for the toys?the Colonel Trautman-like narrator (is that Richard Crenna?) makes sure to tell you Rambo isn?t ?just another Joe? (take THAT, Hasbro!) and that Nomad, the stereotypical Arab terrorist, is ?not above seizing hostages or planting a bomb.? Man, that sounds so quaint today it makes me want to cry.

The Toxic Avenger was a cult hit back when cult hits were more than Hollywood movies that tank at the box office but ?do well on home video.? While the first film was so low-budget it wasn?t even rated by the MPAA, subsequent sequels were all rated R. The series focused on the Toxic Avenger, a.k.a. ?Toxie,? a sickly janitor mutated by toxic waste into a superhuman monstrosity. In the early ’90s, Playmates Toys decided these films, with all their black humor and gratuitous violence, might just be what all those kids who had stopped buying Ninja Turtles toys were looking for. Called the Toxic Crusaders, there was a short-lived cartoon in addition to the toy line.

Until 2004?s Alien vs. Predator, every movie in the Alien and Predator franchises was rated R. And they were hard Rs, full of gore, violence, and sailor-worthy cursing. But that didn?t stop Kenner from releasing an entire line of toys based on both properties in the early’90s.

Kenner had famously attempted to market Alien to kids in 1979 with their 12-inch Alien figure, but (rumor has it) too many complaints from parents killed plans for more toys?and made the 12-inch figure one of the most sought-after collectibles by fans of the movie. In 1992, Kenner returned to the license with their AvP line. Unlike most of the other toy lines discussed here, there was no kid-friendly cartoon to back up the toys, though they did draw from the Dark Horse comics somewhat. Kenner was banking on the idea that kids would know who the Aliens and Predators were and, judging from the relative success of the line, they were right. The Alien figures came with removable facehuggers , so kids could implant Duke or He-Man with all that xenomorphic embryo goodness. Or?not.

Around the same time they were making Aliens vs. Predator toys, Kenner nabbed the license for a little film called Terminator 2: Judgment Day. There was no mistaking the intent here: this was a toy line for an R-rated movie. No cartoon, no tenuous tie-in with any comics, just toy versions of Arnie as the Terminator, the T-1000, and an (admittedly awesome) Endoskeleton.

Considering what a big deal it was for my dad to take me, at age twelve, to see T2 (the first R-rated film I ever saw in a theater) it?s a little troubling to think Kenner felt there were enough 8-10 year-olds out there who knew who the Terminator was to warrant a toyline. Of course, I?m not sure I can really talk, given my pre-adolescent love for our final entry?

1) Robocop and the Ultra Police

Robocop wins the #1 spot by virtue of being arguably the most violent R-rated film of the group to get a toy line. The 1987 film, which featured a graphic scene in which a police officer is brutally shot to death, was nearly slapped with an X-rating, thanks to director Paul Verhoeven.

But the film had, y?know, a robot cop, and kids like robots and cops, right? And so Kenner (of course) developed Robocop and the Ultra Police. In addition to his partner Ann Lewis, Robocop gained G.I. Joe-like pals such as ?Birdman? Barnes and fought the evil Vandals gang. Despite the marketing of the character to children, 1990?s Robocop 2, released years after the cartoon and toy line, was even more violent and sadistic than the first film.