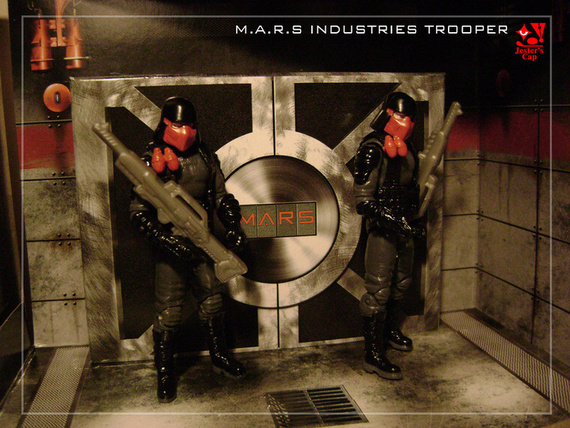 Of course, I mean “totally suck balls” in the strictest analytical sense, as I would never endanger my critical impartiality by pointing out that all the previews of the movie have looked like shit. Anyways, the first movie toys have surfaced, which happens to be this pack of Iron Grenadiers–Destro’s/Doctor Who’s elite guard–with a MARS base, MARS being Destro’s evil military corporation (it’s also a three-pack, with a third figure who looks just like the other two not shown in this picture). Shockingly…well, it doesn’t look terrible. Looks kind of like what I recognize as G.I. Joe, which is about the second time I’ve been able to say that about the live-action movie. Between these guys and the Transformers 2 movie Soundwave which actually looks vaguely like Soundwave, I’m afraid we’ve passed over into some parallel universe where fans are not shat upon. Eerie! Oh, there are a few more pics at ToyArk if you’re interested, and much thanks to Paul at ToyBender for the tip.