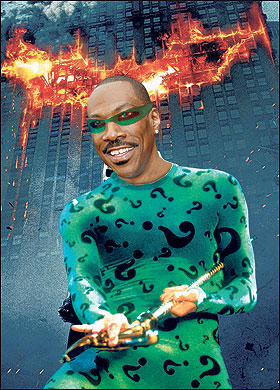 ? Apparently Jon Favreau has hired Tim Robbins to play Papa Stark in Iron Man 2. /Film says it’ll be part of a flashback sequence where Howard Stark will be involved in the Captain America project. This will be a shaft in the backside to actor Gerard Sanders, who played the elder Stark during the awards montage in the first film.
Incidentally, Tony Stark says his dad helped build the atom bomb during WWII, and this Captain America/Super-Soldier Serum fits right in with that.

? Warner Bros President Alan Horn says Green Lantern is “probably” the next DC superhero movie they’ll do. Given how often WB changes their mind about this shit, I wouldn’t place any bets.
(Via Collider)

? I promised I would only report reasonably true Batman 3 casting rumors, or rumors so monumentally stupid as to be insane. Try and guess which one this is:

FUNNYMAN EDDIE MURPHY will play The Riddler in the next Batman movie, The Sun can reveal.
The Beverly Hills Cop star, 47, has been signed up by British director CHRISTOPHER NOLAN to reprise the role played by JIM CARREY in 1995’s Batman Forever.

Yes, this is the same British Sun that reported Cher as Catwoman, and of course, Chris Nolan STILL has not signed up to make a third Batman film. Oh, and both he and Christian Bale hate Robin. And that no one in their right mind would hire Eddie Murphy to do anything nowadays.