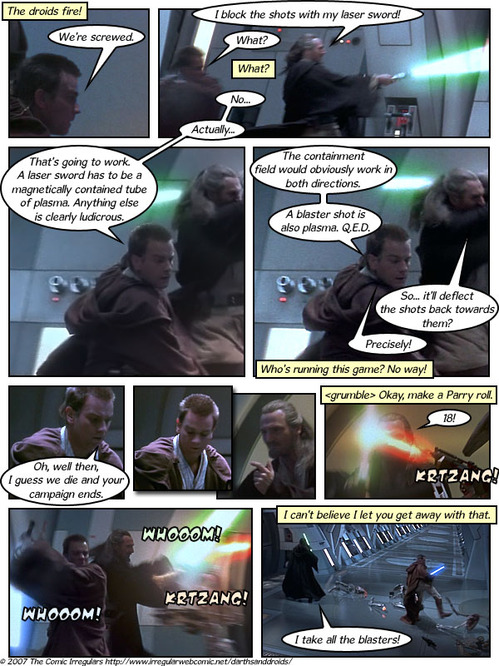 Sorry for the late post, but I just got distracted by something surely most of you already know about, and I’m happy to tell the rest: Darths & Droids. It’s a web-strip of Phantom Menace screen-caps, which has the ludicrously high concept of a bunch of role-players taking on a weird sci-fi adventure in a world where Star Wars never existed. So basically, a reasonable player (Obi-Wan), an XP-and-loot obsessed lunatic (Qui-Gon), a little sister who keeps showing up (Jar Jar), a terrifyingly hardcore gamer with custom dice (Artoo) and a drama student (Shmi/Anakin) traverse a weird world of laser swords and lost orbs and strapping young children to jet engines for profit.

I’ve been reading it for the last hour-plus, and I’m only posting this so I can go back to finishing it. Besides being incredibly funny, if you’ve had virtually any experience role=playing, the notes serve as an incredibly accurate description of the nerdery and jackassery which goes one during virtually any role-playing. Start here. Much, much thanks to Commando John Matrix for the tip.