Menu
Home
>
Merchandise
>
Star Wars Nutcrackers Do Nothing But Despise You 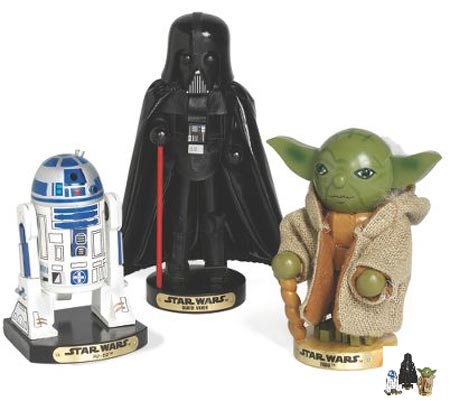 These three Star Wars nutcrackers raise an interesting question of form versus function. Sure, they look pretty ugly, but hey (you might think)–they’re nutcrackers. Perhaps they’re supposed to look poorly sculpted, like the nutcrackers of yore. Or perhaps the nutcracking would be impeded if Yoda looked like Yoda and not a Mighty Mugg. But here’s where the function part kicks in, because these nutcrackers don’t crack nuts. They do not work. You have a nut? Don’t put it in the mouths of Darth, Artoo or Yoda, because they can’t do anything to release the nutty goodness you so desperately crave.

While I’m boggled that someone would, on purpose, make nutcrackers that don’t work–this is not difficult technology to master, goddammit–I’m even more furious that the makers didn’t even try to compensate that by making them not look like shit. I can only surmise that the maker loathe Star Wars fans so much that he would willingly spend his own money producing these little balls of hate. (Via Geekologie)